Man Screams At Black Woman, Says He Hates Black People And Hangs Them 'On Weekends'

A video of the attack was posted by the woman named Jakeila Philips from Utica, where the incident took place. 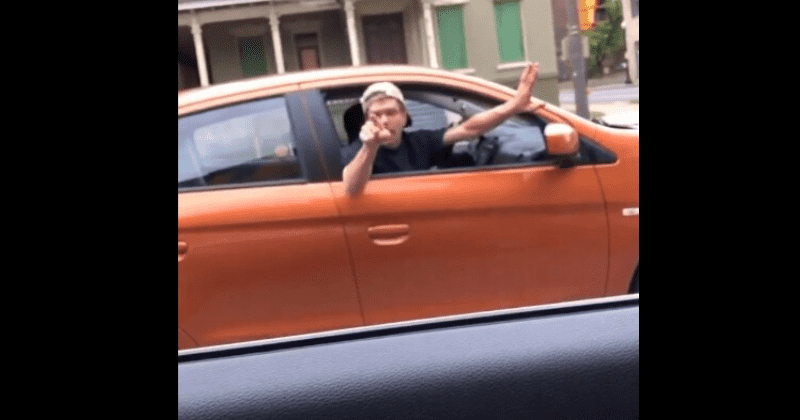 Trigger Warning: The story has a video and details of a verbal racist attack that readers may find disturbing

A man was filmed engaging in a brazen racist tirade at a Black woman from his car while on a road in upstate New York. The video was taken by a woman named Jakeila Phillips, who was at the receiving end of the hate-filled verbal attack. The man was in the passenger seat of an orange hatchback with a woman driving the car and another person at the back. The video shows the man trying to get close to Philip's car while driving alongside her in Utica and gestures at her. The cars are driving down Genesee Street. She winds down her window and asks the man in the video, “What did you say?” He then says, “I said I hate n***ers!” Philip shows remarkable composure and does not get angry but chuckles at the remark and asks further, "What's wrong?" The man then leans out of the window and screams, “Put me on Facebook. Black lives don’t matter! N***er!”

Phillips calmly says "okay" and then asks him if he had “anything else” to say. He replies, “Blacks should be slaves. Give me back my grandparents’ property that might have been your f***ing ancestors.” Philips asks then man his name to which he replies, "Barry Wardell" as he leans out of the window again. She then asks him what he did for a living, to which Wardell says, “I cook. I’m a chef. And I hang n***ers on the weekend” and then strangely added, “But no disrespect to you” as Phillips begins to drive away, while still laughing. The man adds, "You know what get outta my f***ing way." Philips did ultimately post the video on her Facebook page but it was removed. According to a report in New York Post, Phillips posted the video on Saturday and said she experienced “racist/prejudice encounters all the time.”

Lots of comments claiming he might be drunk/on drugs. I’d like a detailed list of substances that can make you develop racist/prejudicial thoughts or sexually harass people (though n/a here). I like my rum (don’t do drugs) & must say, I’m still not a racist asshole or predator.

With the video, she said, “I finally got to catch one on camera.” According to Utica police, the department is “actively looking into the incident to identify if any crimes have been committed” a day after the incident. The department added in a statement, “Regardless of the criminality of it we were disgusted and horrified by the words used. It is one of the most ignorant things anyone has ever said and is not indicative of the citizens here and the city we are all proud of." According to a report in Utica Observer-Dispatch, Wardell is an employee at the food services provider at Hamilton College. David Wippman, the Hamilton College President, said he and the school knew about the video a day after the video was posted and called Wardell’s behavior “an extreme violation of our community standards” that will not be tolerated.

Wippman added in a statement, “I am appalled by what is on the video. He will not work here again and has been banned from our campus effective immediately.” Wippman further stated he would be reaching out to the Utica resident who was the target of Wardell’s verbal assault to assure her that such acts of racism and bigotry will not be tolerated at the college. Wardell had worked as a chef at Bon Appétit, a food and entertainment magazine owned by Condé Nast, earlier this year. The company said he had only worked for a month in February and was placed on leave due to the pandemic. They added in its statement that they do not usually discuss matters related to personnel. But in the case of Wardell, they are making an exception since they are of its extreme and public nature.

Wow, she was terrific “interviewing” him. As he goes down, I hope she ascends in her career/studies

“Bon Appétit has a zero-tolerance policy regarding racism. We condemn these vile comments whole-heartedly,” they added in their statement. The police department are looking to see if Wardell broke any laws during the attack.