trending celebrity people lifestyle news animals
Man Gets Swallowed By A Whale And Spat Out Few Seconds Later: "All I Could Think Of Was My Boys"

Man Gets Swallowed By A Whale And Spat Out Few Seconds Later: "All I Could Think Of Was My Boys" 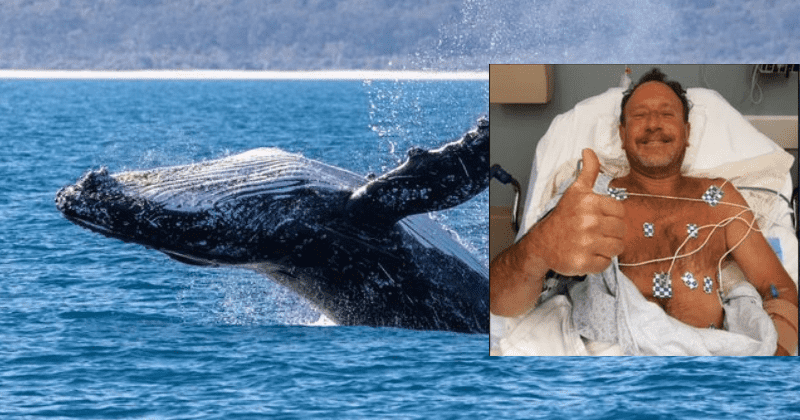 A lobster diver in Massachusetts was swallowed by a humpback whale and later spit out in an extraordinary story reminiscent of the Biblical tale of Jonah. Just like his usual workday, Michael Packard was in his vessel at the Herring Cove Beach in Provincetown one morning last week. He was in his scuba suit and other diving gear and went into the water. Then it became suddenly became dark. “All of a sudden, I felt this huge shove and the next thing I knew it was completely black. I could sense I was moving, and I could feel the whale squeezing with the muscles in his mouth,” he told the Cape Cod Times. Packard initially thought he was inside a Great White shark but then he didn't feel any teeth. Nor was he injured. He realized he was inside a whale.

“I was completely inside; it was completely black. I thought to myself, ‘there’s no way I’m getting out of here. I’m done, I’m dead.’ All I could think of was my boys — they’re 12 and 15 years old,” Packard added. But then a miracle happened. The whale began to shake its head and Packard knew his presence inside was not something the animal liked. The whale went up to the surface and Packard saw light after what was around half a minute. “I saw light, and he started throwing his head side to side, and the next thing I knew I was outside (in the water),” said Packard. The whale then spewed him out. Revealing more details of those moments, Packard's sister, Cynthia Packard said, "There was all this action at the top of the water. Thank God, it wasn’t a white shark. He sees them all the time out there. He must have thought he was done.”

NEARLY EATEN BY WHALE: Michael Packard just told us his incredible story. He says he was nearly swallowed by a humpback whale while lobster diving off the coast of Provincetown this morning. #NBC10Boston #NECN pic.twitter.com/9IE126H5rY

While Cynthia was not at the scene of the event, her brother's colleague, crewman Josiah Mayo, witnessed the incident and told her about it. He told Cynthia the whale burst to the surface of the water, and that even he thought it was a Great White. Mayo saw Packard being hurled out of the whale's mouth and into the sea. The humpback was medium-sized, according to Mayo. He picked Packard up and called for help while seeing him back to shore. Packard was taken to the Cape Cod Hospital by an ambulance of the Provincetown Fire Department. Packard suffered “a lot of soft tissue damage” but no major injuries like broken bones. He was shortly released from the hospital and is recovering at home.

Humpbacks are baleen whales and couldn't eat a man even if it wanted to. Accidentally slurped up the diver, then spit him out.

According to Jooke Robbins, director of Humpback Whale Studies at the Center for Coastal Studies in Provincetown, Packard's encounter with the mammal was probably an "accident" since humpbacks are not at all aggressive especially towards humans. She said, "Based on what was described, this would have to be a mistake and an accident on the part of the humpback" She added, "It is not something I have heard happening before. So many things would have had to happen to end up in the path of a feeding whale." Packard has had another near-death experience but not in the sea. Packard was traveling to Costa Rica in a small plane when it crashed in the jungle, killing three people including the pilot. While Packard sustained multiple serious injuries he was alive. Five other passengers also survived two nights in the jungle before being found.

It’s been a long time since they last added a book to the Old Testament but “if Jonah gets a book, this guy should get one” is a pretty convincing argument