trending celebrity people lifestyle news animals
Man Serves His Friends Tacos Made From His Own Amputated Leg: "It Was Fun And Cool"

Man Serves His Friends Tacos Made From His Own Amputated Leg: "It Was Fun And Cool"

Reddit User IncrediblyShinyShart revealed on the platform that his foot was left shattered when a car hit his bike and sent him careening into a nearby forest. 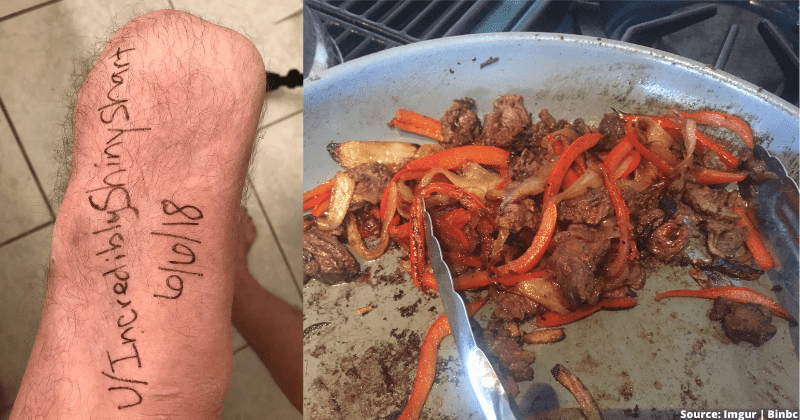 Disclaimer: This story contains details and photos of cannibalism that readers may find disturbing.

Although I'm someone who loves experimenting with different kinds of food, I draw the line at consuming certain types of meat, including a fellow human's flesh. I mean, is there even a legal way to obtain it without having committed a crime? Even if there was a way, would you be able to do it ethically? The latter question plagued one Reddit user's mind, who came face-to-face with the shocking hypothetical following a motorcycle crash. User IncrediblyShinyShart revealed on the platform that his foot was left shattered when a car hit his bike and sent him careening into a nearby forest. The injury was so severe that he could no longer walk and tragically amputation was the only option. But when doctors suggested it, Shiny had just one question, "Can I keep it?"

Most hospitals hand over their patients' body parts to their families owing to the rituals that follow after their passage. In this case, Shiny was alive and doctors did not see any reason why they wouldn't give him his own amputated foot. After being granted permission, the man took it home and froze it as he wasn't sure what he wanted to do with it. During an interview with VICE, he shared that he wanted to "have it taxidermied or freeze-dried" as cremating or burying a part of himself didn't seem easy. "It’s a part of me, and I want it back," he shared.

This guy had his foot amputated after a motorcycle accident. He asked doctors if he could keep his removed body part, and they said yes.

He then decided to make (and eat) fajita tacos out of his own amputated foot. https://t.co/F6zsPRTVyS

The taxidermy plan fell through when he could not find a taxidermist who would take him seriously and freeze-drying his foot turned out to be a rather expensive affair that would have cost $1,200. Thus, he decided to cast his foot in plaster and use it as a doorstop. The man, who wanted to remain anonymous, also captured "a 3D rendering" to create little keychains. The foot was cremated with a bunch of flowers later. Before casting it, he reportedly chopped off a chunk from the top of the shin region, placed it in a plastic bag, and froze it. Back then, while cleaning the amputated part he was surprised by how well-preserved the foot was. That day his friends had come over and they were apparently playing with the foot as if it was an everyday object.

"There was no emotional connection. I could think, 'Yep, that’s my foot right there,' but there wasn’t some deep part of me that felt weirded out by it. In fact, that was the weirdest part, was that it wasn’t weird," he explained, noting how the idea to taste his own flesh came to him. So, he invited 11 of his friends on July 10, 2016, three weeks after the accident, and said, "Remember how we always talked about how, if we ever had the chance to ethically eat human meat, would you do it? Well, I’m calling you on that. We doing this or what?" Ten of them agreed. One of his friends also invited her chef boyfriend, who agreed to prepare it for everyone provided he could eat it too.

"He marinated it overnight and sauteed it with onions, peppers, salt, pepper, and lime juice. Then he served it on corn tortillas with a tomatillo sauce," shared Shiny. Now for the moment of truth: How did it taste? "People think it tastes like pork because in movies we hear it called 'long pig.' But that term originated in places like Papua New Guinea, where they eat wild boar. They’re not eating our big, fat, domesticated pigs that have white meat. Boars don’t have white meat. They just don’t. I remember eating a heritage pig and it was some of the reddest, most flavorful meat I’d ever had. It was almost like venison. And I think it’s more akin to that. This particular cut was super beefy. It had a very pronounced, beefy flavor to it. The muscle I cut was tough and chewy. It tasted good, but the experience wasn’t the best," he shared.

"Eating my foot was a funny and weird and interesting way to move forward," he said, adding that it was a one-time thing "where I had the chance to do something unique in a healthy and ethical manner." Shiny assured, "I don’t have some hunger to go hunt people down and gnaw off their faces" and noted that he did it because "it was fun and cool, and I have a great story." In the United States, there are no laws against cannibalism, as most states have enacted laws that make it impossible for people to obtain the flesh indirectly. In Shiny's rare case, it was not only legal but also ethical.