trending celebrity people lifestyle news animals
21-Year-Old Who Hasn't Been On A Date For Years Takes 3-Hour Train Ride To Meet Her, Gets Stood Up

21-Year-Old Who Hasn't Been On A Date For Years Takes 3-Hour Train Ride To Meet Her, Gets Stood Up 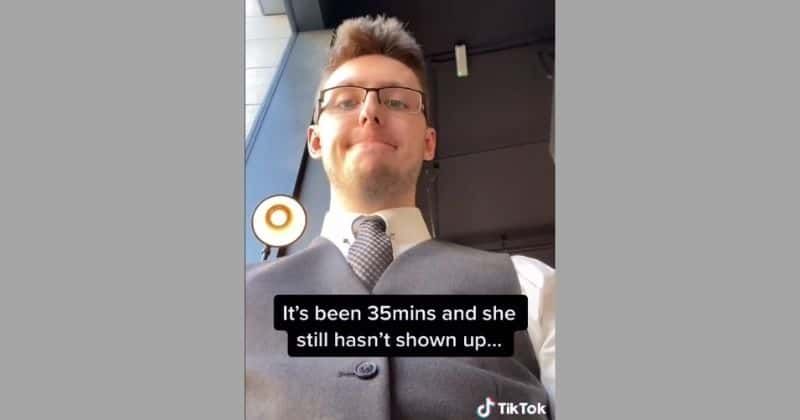 A man in Scotland who traveled a considerable distance to meet his date was unfortunately stood up. While most of us would have returned dejected, he made the most of it. It all began when 21-year-old Craig Moffat was thrilled about going on a date after two years. He even chronicled his journey from Edinburg to Aberdeen on his TikTok account. "I can’t wait, I’m so excited," posted Moffat alongside the views of the countryside from his three-hour train ride reports Metro. In addition, he made sure to dress for the occasion too wearing formal attire. After all, as they say, the first impressions are often lasting impressions.  The two had apparently agreed on a stylish-looking restaurant, something Moffat showed in his posts. He arrived early, 20 minutes before time, for his date and waited at a table. But as minutes passed, there was no sign of the man's date, where he noted  "It’s been 35 minutes and she still hasn’t shown up." Moffat understandably appears crestfallen.

‘Maybe it’s not time to get back out there just yet…’ 💔 https://t.co/mMLkrKouUS

Nevertheless, the man decided to order some food and drinks and have a meal of one, and then called it a day. He then went back to the station to return home. He captioned a picture of the station and wrote, "I guess I’ll just head home…I was really looking forward for tonight." Despite having been let down, Moffat remained optimistic, and brushed off his no-show date, stating, "Maybe it’s not time to get back out there just yet…" with the hashtags "heartbroken" and "all women are the same." His video was viewed more than 4.6 million times and received 20,000 comments and liked over 700,000 times. Many on the video-sharing platform cheered Moffat up and said the date probably didn't deserve him.

I’m glad he treated him a nice meal.

One person wrote: "She doesn’t deserve you mate, you’ll find the one." Another stated: "Dude – I know you were excited but you’ve dodged someone that would make you really unhappy in the end. You deserve better." Many others were angry the woman didn't even have the decency to call off the date. On Twitter, @rochie87 wrote: To not even contact him is well out of order, the poor lad. Putting yourself out there and going on a first date is nerve wracking as it is without this happening. I hope he doesn’t let it put him off. The right person is out there PS.. not all women are the same. Another handle @Helenl1976 wrote: The least she could of done is text him poor lad, she’s what’s commonly known as a cocktease, he should send her the bill.

What a bitch. Onward and upwards dude.

@Stunt69Cupid had harsh words not just for the date but for all of her kind. They wrote: Poor guy women are trash any way dude just a shame you had to travel 90 miles to find that out. Moffat's story is very similar to that of an Indiana woman named Jasmine Triggs, 23. We had earlier reported about how she flew from her hometown of Fort Wayne, 1,500 miles away to Houston, Texas, for a man she met online. But he never showed up. She met the man online before flying out. Much to her disbelief, the man, identified only as Jamal, blocked her number the minute she'd stepped on the plane. Upon reaching her destination, Jasmine was left heartbroken and stranded at the airport. "I was talking to this guy for about a week and he asked me to come out to Texas. We were talking to the morning I was due to go," she said. She had spent $400 on the trip.

Businesswoman is left baffled after flying 1,500 miles to meet her online love who stood her up and blocked her number, leaving her stranded at the airport
via https://t.co/btKykKiClM https://t.co/HdWvc2fzQY