Heartless Manager Fires Mom Whose Son Is On Life Support: "No Reason You Can't Work"

The heartless manager also accused Crystal Fisher of creating "too much drama" over her son being on life support. 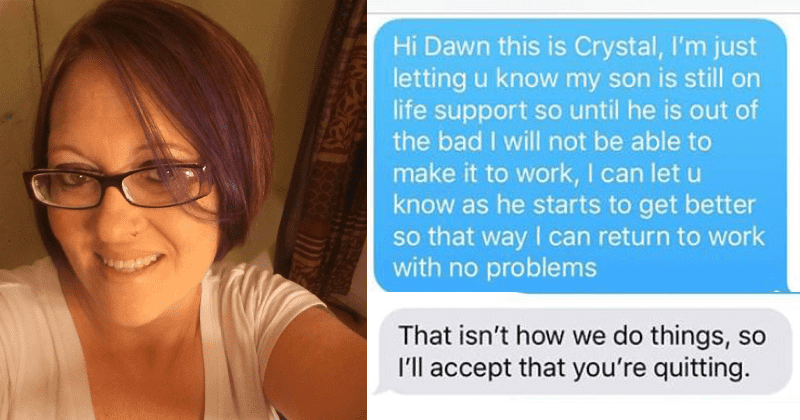 In news that makes your skin crawl, a mom was fired from her job while tending to her son, who was on life support. Crystal Reynolds Fisher had the rug pulled from under her feet when her son Jason was hospitalized and on life support, but things were about to get a whole lot worse, as her boss fired her for not turning up to work. She posted the screenshots of the conversation with her boss on Facebook, outing her boss' complete lack of empathy.

Fisher's son Jason, 18, developed a form of sepsis and was in danger of suffering multiple organ failure. "I didn’t know what was going on, how my son was or nothing. Finally, a doctor came out and said they had to put him on life-support,” said Fisher, according to The Sun. She was working with PS Food Mart gas station in Michigan when her son was hospitalized. Her boss had no sympathy for her plight and even accused her of being dramatic. Crystal Fisher posted the exchange with her boss on Facebook, writing: So my son is on life support and I tell my boss 48 hours before I am to work again that I will not be able to work until my son is off life support and this is what she tells me!

Crystal Reynolds Fisher texted to inform her boss that she won't be able to make it to work, given her son's condition.  Fisher wrote: I’m just letting you know that my son is still on life support so until he is out of the bed I will not be able to make it to work. She then added: I can let you know as soon as he starts to get better, so I can return to work with no problems. To Fisher's shock, her boss, Dawn, without enquiring about her son's health, got straight to the point: That isn't how we do things, so I'll accept that you're quitting. Fisher hit out at her boss for being so heartless. "This is not an eye doctor’s appointment or a dentist appointment, this is my child's life we are talking about. I never quit my job. Would you be able to go to work and function if your child was on life support?" asked Fisher. Without skipping a beat, her boss replied, "Yes I would, I still have bills to pay. We don't get to come and go as we please at Folk Oil. I have a store to run and that's my focus."

The post went viral and sparked angry reactions online. One Facebook user wrote: I don’t understand how people can be so sick! Another wrote: So sorry darlin!! My prayers are with you & your son!!! You should not have to deal with this kind of bullshit at this sad time! The only thing that you should be focusing on is your boy right now!!

The outrage wasn't limited to just the internet, as Folk Oil fired the manager a day after the texts were posted on Facebook. “Today we were made aware of a situation at one of our locations where an employee was told that they could not get time off to care for a hospitalized child. PS Food Mart and Folk Oil Company are in complete agreement that this is not acceptable," read a statement released by the company, according to News.com.au.

Folk oil conducted an investigation into the matter and fired the manager responsible for sending the texts. "We investigated and have found that the situation was handled improperly and without the compassion that we value as a company. For that, we are very sorry. As a result of this finding, we took quick action and that manager is no longer employed by PS Food Mart," read another statement released by the company. PS Food Mart announced that the employee could take as much she wanted to tend to her son, "We have already been in contact with our employee and have communicated our support and assurance that she will be allowed any time off needed. We are sympathetic to anyone, especially our employees that have a loved one in the hospital.”