US Veteran Who Fought In Battle Of Iwo Jima Celebrates 99th B'day: "A True American Hero"

The battle saw the Marine Corps and Navy landing in the Island to the south of Japan and eventually conquering the location. 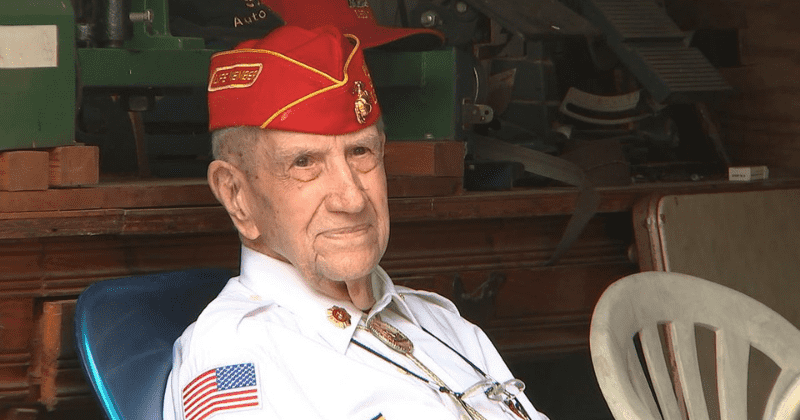 "Well, I’m lucky. Been through the war and come through, 99 years old," Coy Shue, a United States Marine veteran said as he was surrounded by family, friends, his local Marine Corps League, and, most importantly, his wife of 72 years. Shue is among the oldest Marines alive today, having fought during one of the biggest battles of World War II - Iwo Jima. Speaking to WSOC-TV, Shue narrates a tale of his life, struggles, and the battles he fought in what looks fit for the history books. He was born in Charlotte's NoDa community, and as a teenager, during the thick of the Second World War, he felt compelled to don the uniform a little over 75 years ago. And so, he enlisted himself in the Marine Corps before being sent to the Battle of Iwo Jima.

Although the battle went on for a little over a month between February 19, 1945, to March 26, 1945, it was one of the fiercest and the bloodiest confrontations in the United States history. The battle saw the Marine Corps and Navy landing in the Island to the south of Japan and eventually conquering the area to nearly neutralize the Imperial Japanese Army's ability to launch attacks. Speaking about his time as one of the thousands of Marines on the battleground over 75 years ago, Shue said: "I just did my job, not a hero -- heroes died. I just did my job, like the rest of the servicemen. We fought for that flag, and it’s a symbol that we love." he added.

The near-centurion came very close to death during the conflict but managed to survive when the bomb that landed near him failed to explode. Recalling the incident, he adds: "On Iwo Jima, a bomb landed in the hole with me and didn’t go off, and I said right there, ‘Lord, I’ll be a good person for the rest of my life and serve you.’"

His promise to the Lord all those years ago is still being kept, his son Rob Shue explains. "He’s just a good man. That’s all he wants to be known as, and that’s what he’s been all his life,” Rob Shue told the outlet. "He’s a hero, and there’s not many left, so I’m so proud of him." Coy Shue returned from the war, victorious and soon after met his wife Doris while he was out "Square dancing". The couple has been happily married for over seven decades and has since had two sons, who themselves were both Marines and Charlotte residents all their lives. When the reporter asked how Shue and his wife met, he replied: "Square dancing." When asked if he has any special life lessons he could impart on others after having lived a heroic and fulfilling life, Shue added: "I just wish everybody would think before they do anything. Trust in God. He’s the answer. He was my answer. He followed me all through the war, everyday. I pledged the Lord’s prayer, he spared me," he said, in conclusion.

People online came together to wish Shue a great birthday while thanking him for his service. Sue Zavorka wrote on Facebook talking about how it's an "honor" to hear his story. She wrote: "Happy happy Birthday Mr. Shue! It is a great honor to hear your story! What strength of character and commitment to a good life, you’re a man of your word. I’m sure you are greatly loved and respected by your lovely wife and family! I love our country, our flag, and men like you who fought and sacrificed for our freedom." Walter Schiller added: "A true American hero. Happy birthday and many more!" Amy Lynn added: "Your story about the bomb landing next to you and not going off is so incredible. God is amazing. Happy 99th Birthday  Keep sharing your stories-they are so important to hear. God bless you and have a wonderful birthday."