Meghan Markle And Prince Harry Welcome Baby Girl, Name Her After Diana And The Queen

Lili is named after her great-grandmother, The Queen, and her late grandmother, Princess Diana. 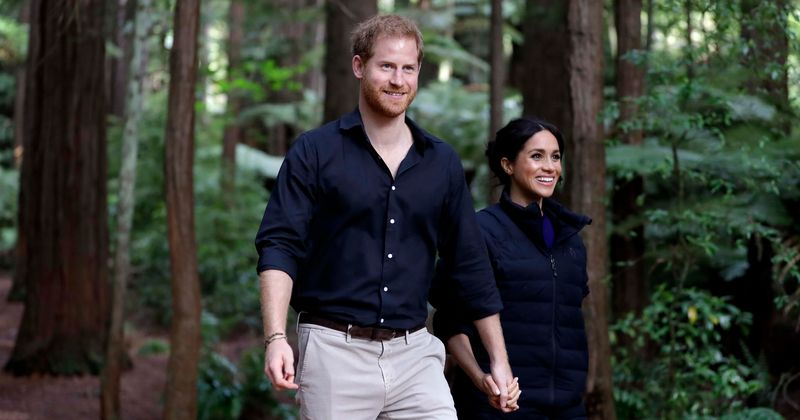 Meghan Markle and Prince Harry welcomed their second child— a baby girl — on Friday. A statement from the couple released on Sunday said: It is with great joy that Prince Harry and Meghan, The Duke and Duchess of Sussex, welcome their daughter, Lilibet "Lili" Diana Mountbatten-Windsor, to the world. Lili was born on Friday, June 4 at 11:40 a.m. in the trusted care of the doctors and staff at Santa Barbara Cottage Hospital in Santa Barbara, CA. She weighed 7 lbs 11 oz. Both mother and child are healthy and well, and settling in at home. Lili is named after her great-grandmother, Her Majesty The Queen, whose family nickname is Lilibet. Her middle name, Diana, was chosen to honor her beloved late grandmother, The Princess of Wales.

It continued: This is the second child for the couple, who also have a two-year-old son named Archie Harrison Mountbatten-Windsor. The Duke and Duchess thank you for your warm wishes and prayers as they enjoy this special time as a family. The couple expressed gratitude to all their supporters, saying Lili "is more than we could have ever imagined, and we remain grateful for the love and prayers we've felt from across the globe."

It is well-known that the Queen's nickname given to her by her late husband, Prince Philip, was "Lilibet." Thus, it was no surprise that Harry has had this name in mind for his daughter for a while now. When the couple was expecting Archie in 2019, they visited the town of Birkenhead and heard name suggestions from a group of school children. PEOPLE reports that Harry reportedly showed a keen interest in the name "Lily," even going on to ask a mother how she spelled her daughter's flower-inspired name.

After the announcement of their daughter's arrival, the royal family was "delighted" to hear the news. "The Queen, The Prince of Wales and The Duchess of Cornwall, and The Duke and Duchess of Cambridge have been informed and are delighted with the news of the birth of a daughter for The Duke and Duchess of Sussex," a Buckingham Palace spokesperson said, according to PEOPLE. Additionally, another royal family member shares Lili's middle name. Per NBC News, Lili shares her middle name with her cousin Princess Charlotte Elizabeth Diana, daughter of Prince William and Katherine.

What a beautiful name and a great honour to be named after the Queen and Diana; two strong and remarkable women.

As for Harry and Meghan, the arrival of their baby girl must mean a lot to the couple especially since Meghan has been candid about her pregnancy loss in July.  In a New York Times op-ed, Meghan shared that "Losing a child means carrying an almost unbearable grief, experienced by many but talked about by few."  She continued, saying: In the pain of our loss, my husband and I discovered that in a room of 100 women, 10 to 20 of them will have suffered from a miscarriage. Yet despite the staggering commonality of this pain, the conversation remains taboo, riddled with (unwarranted) shame, and perpetuating a cycle of solitary mourning.

The abuse is horrendous. I have so much respect for her and Harry putting their family first. You only get one life. Live it true, if you can.

After stepping down from royal duties in 2020, Meghan and Harry left England and started the next chapter of their lives in Los Angeles. As difficult as the years have been for the couple, they seem to be finding peace and love in their family. Harry and Meghan's son, Archie, turned 2 last month. The pair announced the sex of their second child during the bombshell interview with Oprah Winfrey in March 2021. Together, the are happy to be just a family of four. This was confirmed by Harry himself who shared that, "Two is it."

Such lovely news a happy healthy girl! Wonderful that they have honoured the Royal Family by naming their baby girl after HM Queen Elizabeth and of course we knew Diana would be there too.

Prince Harry revealed that he was ecstatic to learn that he was going to have a daughter and stated: "Grateful, having any child, any one or a two would have been amazing, but to have a boy and then a girl . . . now we've got our family and we've got four of us and our two dogs, and it's great." Meghan, 39, and Harry, 36, have long craved a family life outside the royal institution. The pair officially stepped down from their roles as senior royals last year.  A palace source previously told PEOPLE that by the time of Archie's birth, "they knew they were going to hit the nuclear button" on their royal exit.

They named their child after his grandmother who they've both spoken highly of from the beginning. Damn I swear common sense is not that common 😒

While most netizens offered their congratulations and were impressed that they honored the Queen and his late mother, there were some naysayers who pointed out their hypocrisy following the Oprah interview and mental health series where Harry spoke of the "genetic pain" that he endured whilst growing up in the royal household. Here's what they had to say:

The Hypocrisy is astounding

LILIBET? Really? The WOMAN who did a terrible job bringing up Charles that inturn scarred Harry, REMEMBER? So THEY hate the firm, but LOVE THE TITLE, THE PRIVILEGES NOT TO MENTION THE CONNECTIONS WITH 'LILIBET' THE QUEEN?? So they hate the Queen but adore 'LILIBET'for PR points?

Bit surprised that Meghan's loyal and diplomatic Mum Doria; (the only relative still close to her) is completely overlooked with both of their daughter's names coming from the RF. 🤔