It appears the first lady is quietly making plans for her life after the White House. 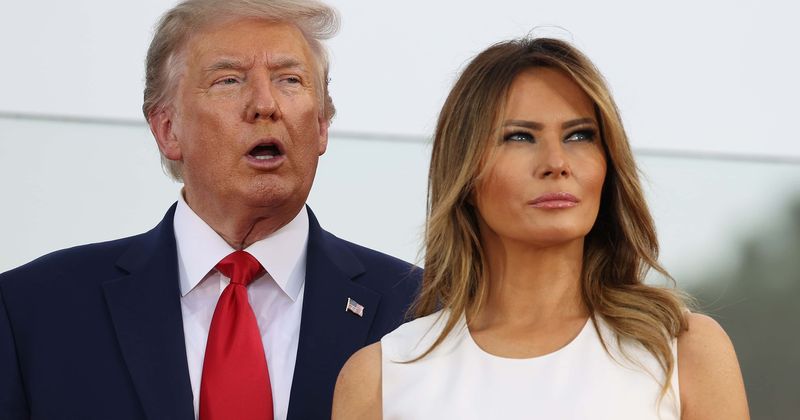 As President Trump continues to find futile ways to stay in the White House it seems the FLOTUS may be ready to move on. While she has been supporting her husband publically, privately it may seem that Melania Trump is ready to pack up and focus on her future outside the White House. A source told CNN, "She just wants to go home." As for rumors that state that her husband is looking forward to a 2024 bid, the source added, "That might not go over well."

A source in the publishing industry familiar has said that the FLOTUS maybe focussing on writing a photo-centric coffee table book about White House hospitality history. Or another based on the design projects she has completed as the first lady. Most first ladies select the administration's official china service, which Melania herself is reported to have done. "Mrs. Trump is focused on her role as first lady. Monday she unveiled her most current effort in preserving the White House by announcing the completion of the tennis pavilion. She also recently unveiled a new piece of art in the newly renovated Rose Garden. Her office just revealed this year's Christmas décor. Her schedule remains full with her duties as a mother, wife, and first lady of the United States," the first lady's chief of staff Stephanie Grisham told CNN.

she must be screaming in the inside 🤣

Melania is now focussing on Mar-a-Lago, a source said. While her husband refuses to concede, Melania is looking forward to a smooth transition for herself and her 14-year-old-son, Barron. She is already overseeing shipments of personal items to Mar-a-Lago from both the White House and her Trump Tower penthouse in New York City, revealed a source. Melania Trump views Mar-a-Lago as a peaceful respite of sun, solitude and self-care. "Her parents have a suite of rooms there as well, not far from the family quarters," said Laurence Leamer, author of Mar-a-Lago: Inside the Gates of Power at Donald Trump's Presidential Palace.

Speaking of Donald Trump, a source said that Melania "is aware he is not the kind of ex-President who will retreat to a quiet life of writing his memoir, or taking up oil painting," one of the sources said, referencing the post-White House habits of former Presidents Barack Obama and George W. Bush. But he may be looking forward to resting there. On Saturday at the Georgia rally, Trump told the crowd he would look forward to post-White House life at Mar-a-Lago. "I'd go to Florida ... I'd take it easy," he said.

As for Melania, she may be thinking of establishing an official office after the White House as she has been asking around about funds for an office and staff. One source confirmed Trump is looking at the idea of keeping up her "Be Best" platform aimed at helping children. According to the official White House website,  the mission of BE BEST is to: focus on some of the major issues facing children today, with the goal of encouraging children to BE BEST in their individual paths, while also teaching them the importance of social, emotional, and physical health. BE BEST will concentrate on three main pillars: well-being, online safety, and opioid abuse.BE BEST will champion the many successful well-being programs that provide children with the tools and skills required for emotional, social, and physical health. The campaign will also promote established organizations, programs, and people who are helping children overcome some of the issues they face growing up in the modern world.

"Over the past two years, Be Best has played a major role in spreading awareness, highlighting successful programs and acts of kindness, and encouraging public-private sector relationships to help children overcome the struggles they face every day," said First Lady Melania Trump. As for future plans of the campaign, a source said there are no firm plans for how or when that might take shape have been determined as of now. In light of the rumors of her departure, many got on Twitter responding with her infamous jacket that said: 'I really don't care. Do U?'