Melania Trump Sweetly Wished Her Son, Barron, Turning 15, But Gets Mocked Instead 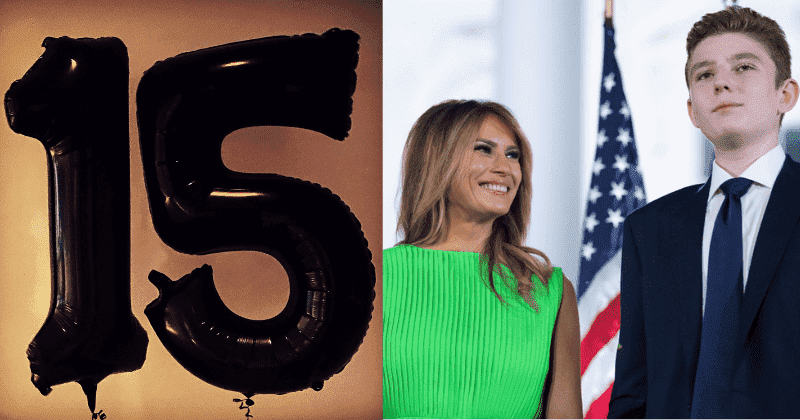 Since leaving the White House, the former first lady, Melania Trump posted a rare birthday message to her son, Barron, who turned 15 on March 20.  She put up a picture of two black balloons fashioned as the number 15 alongside the caption "Happy Birthday BWT." Barron's full name is Barron William Trump or as his mother calls him, "BWT."  The post was simple, but it divided the internet. And what was the reason: the balloon's color scheme. Twitter user KeepingtheFai19 wrote: Creepy!! Black balloons for a 15 year old?? Poor child. That dark world you live in must be so cold but I do wish you a Happy birthday!!

Another user, QuippieChick added: If only kids could choose their parents...Barron would’ve chosen to have some with better taste, who’d remember his name. And took him to baseball games, instead of treating him like a photo prop. A third, Penrhos88 opined the balloons looked like it "dripped blood" and commented: How festive! Nothing quite says Happy Birthday to a 15 year old quite like a black balloon that appears to be dripping blood. But then...#BeBest never really made it either. Others like d_fredeick found the post "depressing" even offered their suggestion to "liven" up the birthday wish. He wrote: Kind of depressing. Should have been a more livelier photo with ice cream, cake, balloons and lots of rainbows.

Dark black balloons. Of course to match your soul.

On Facebook, people had a lot to infer and analyze from the simple birthday wish. Lisa Summers wrote: Oh no a picture of ballon numbers that are black!! She obviously is in a very dark place. These stories that are a blatant reach are so obvious and I’m so embarrassed for ANY (no matter which side it’s against) negative political post that is this stupid and it causes a loss in respect for any of their opinions. There are things that are clearly wrong that you could post about... really photos of balloons?! You can do better and should.

However, there were some who rushed to Melania's defense. June Johnson-Ferrell commented: She wished her son Baron a happy birthday as any good mother would. Leave the family alone. Wish Baron a happy birthday and get over yourself whoever authored this travesty of a post. Some people have no life and are always looking for negative. Dearly is not dearly but sickening and disgusting. Happy Birthday Baron and God bless you and your family.

What are these, blood balloons? You can't even do balloons classy.

Shyla Kellogg stated: Regardless of who his parents are, whether we like them or not, he's still a child. He had no say in who his parents are or being sucked into the nonsense he's surrounded by. Leave him alone. I hope he had a great birthday. Susan Amundson apologized for the hate that had been spewed on the comment section writing: I am so sorry for all the haters. This isn’t about politics this is about a 15 year old having a birthday. Barron I hope you have a great day as all teenagers should on their birthdays.

For most of his time at the White House, Barron Trump was kept put out of the spotlight and was only seen in snapshots with his parents when going to and from of the White House. Since leaving Washington DC, the family is at their Mar-a-Lago resort in Florida according to PEOPLE. Sources of the publication claimed that Barron had been Melania's single most important focus while her husband was in office.