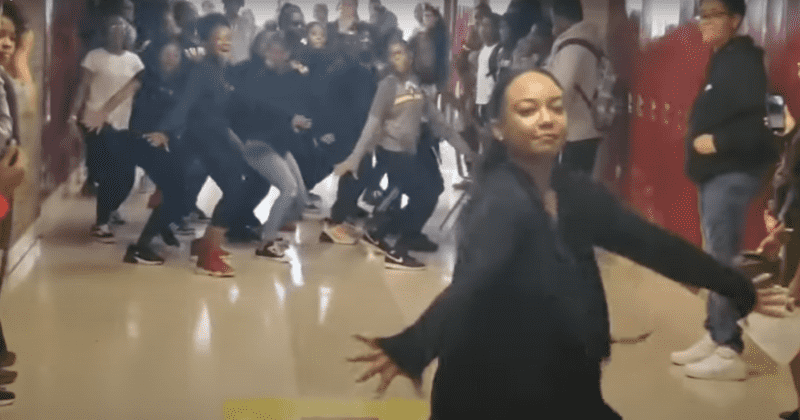 Whether in school or college, we all know that one teacher who stands out among the rest. It might be their dedication to the craft or their professionalism or just their ability to inspire their students and do things slightly differently from their contemporaries. One such teacher in Michigan led her students in a flashmob-like dance at their school. Videos of Jennifer Hawkins dancing to Michael  Jackson's "Thriller" in the hall of Birney School in Southfield with a group of students at the back matching her steps took the school by surprise. It also took social media by storm. Since being uploaded on various platforms, the video has been viewed thousands of times with a number of heartwarming reactions commending Hawkins for her dance moves and for being a sport.

But to be fair, Hawkins is a dance teacher at the school so it's no wonder her moves are on point. The video begins with a group of students at the back as the song plays. Then Hawkins walks slowly into the frame and begins to dance to the surprise of many students who stand and watch her as well as her troupe. When it first came out, "Thriller" was a musical and dance phenomenon with everyone trying to copy each step of the "King of Pop." Released in 1982, the iconic song and dance routine was one of the finest productions to be seen at the time. If MJ was alive, he would have been proud. The dance was quickly captured by other students who looked on in awe.

Absolutely. Teaches like this make the world go round and the day pass faster!!!

According to Fox News, the video was first shared on YouTube where it was viewed 278,727 times. But it's popularity shot through the roof when it was shared on Twitter. O.J. Spivey shared the video with the caption "The Undisputed Teacher of the Year" and it was viewed a staggering 4 million times. It also received over 30,000 likes, thousands of retweets, and even more comments. TV's Nate commented: And THAT is why you keep the arts on the curriculum. Look at those kids. How often do you remember feeling that alive in school? I'd wager not very. Some thought the dance routine was so good it gave them "goosebumps." Stanley Spadowski wrote: That’s awesome!!!! You don’t pull that off unless you’re a great teacher! I got goosebumps just watching that!

Wish I’d had a teacher to inspire me like she has inspired her kids!

Others said dancing to "Thriller" in public was something they wanted to do for a long time and seeing Hawkins execute the steps with finesse inspired them to try it out. One such commenter noted: Awesome! This has been on my bucket list for a a long time....a flash mob to thriller! Imagine how much that would make someone smile! This is so so cool! Anyone would be proud to have a teacher like Hawkins but not everyone is lucky to have one. BAMF....Abe wrote: Imagine having a teacher like that ? Ughhh ! I would LOVE HER ! As I’m sure her students do! Talk about relating to the kids ! This is awesome !

I was honestly hoping for the full song. ❤️ Love this so much!

But there were some wet blankets like B. O'Brien who stated: I’d rather that dedication to math & science, but yeah that’s ok too. Janet Jackson videos are a top employment opportunity around the country right now.