trending celebrity people lifestyle news animals
MyPillow Founder Claims Trump Will Be "Back In Office" By August, Says He Has Evidence For Voter Fraud

MyPillow Founder Claims Trump Will Be "Back In Office" By August, Says He Has Evidence For Voter Fraud

The pillow maker spoke to Trump advisor Steve Bannon on his podcast where he claimed that Democrats stole elections from Donald Trump. 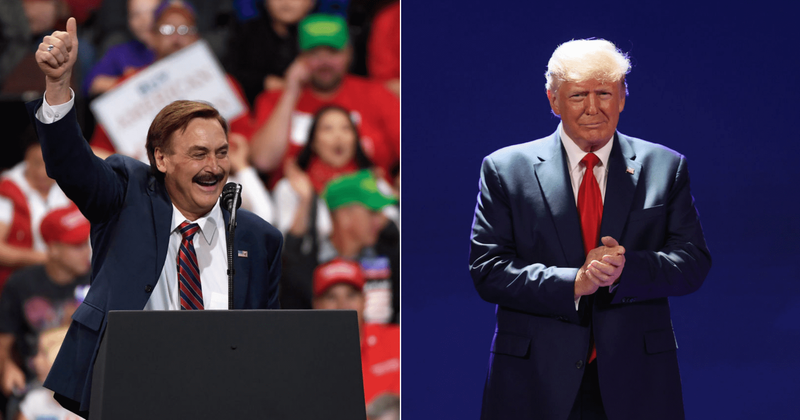 After a few weeks on the sidelines, the MyPillow founder and CEO, Mike Lindell, is back at it again - he is peddling conspiracy theories on voter fraud and claiming that Trump will be "back in office by August". During an appearance on Steve Bannon's War Room: Pandemic podcast, Lindell continued to push the theory that Democrats orchestrated voter fraud to "steal" the 2020 election from Trump and said he has collected enough evidence to prove his claims in front of the Supreme Court, Business Insider reports.

Mike Lindell declares that as a result of voter fraud lawsuit he'll soon be filing, "Donald Trump will be back in office in August." pic.twitter.com/5Ewtd9SZ1O

Mike Lindell needs to be put in a room padded with MyPillows. https://t.co/kiCP5Y0Esv

"Donald Trump will be back in office in August," Lindell said, gesticulating wildly at the video camera. "What I'm talking about Steve is what I have been doing since January 9th. All of the evidence I have, everything that is going to go before the Supreme Court and the election of 2020 is going bye-bye," Lindell said, during the episode which aired over the weekend. "It was an attack by another country - communism coming in," he claimed. "I don't know what they're going to do with it after they pull it down but it's going down." Lindell went on an eight-minute rant where he added that he has been "hiring the best private investigators in the world" to find the truth behind the election results. Lindell has refused to back down even after being slapped with a $1.3 billion defamation suit by Dominion, the election software company - who he's been defaming over the last two months.

The problem is not that Mike Lindell says crazy, stupid stuff. The problem is that there are violent pro Trump supporters who believe this, egged on by @GOP leaders who lie about the election being stolen. That’s why National Guard troops in body armor are still at our Capitol. https://t.co/frszcA6Vpr

$6.8 billion. That's the total amount Dominion Voting Systems is asking for in damages from those it's sued thus far, filing three $1.3 billion lawsuits against Sidney Powell, Rudy Giuliani and Mike Lindell and a $1.6 billion suit against Fox News.

Lindell vowed that his so-called "evidence" of widespread election fraud is going in front of the Supreme Court and insisted that it would negate the 2020 election. The 59-year-old's claim comes as the Supreme Court has vehemently denied hearing any case that looks to overturn the electoral votes of any state Trump lost in. And yet, he's peddling false hope to his supporters. According to a Reuters Fact Check report, the Supreme Court has struck down over 50 lawsuits crying "voter fraud" in the first few weeks of the election result due to a lack of evidence. According to a Washington Post, rather than alleging “widespread fraud or election-changing conspiracy”, the lawsuits pushed by Trump and allies were focused on smaller complaints, which were largely dismissed by judges due to a lack of evidence. "The Republicans did not provide evidence to back up their assertions — just speculation, rumors or hearsay", the report said, adding that they even used a claim written on a sticky note to push their assertion.

BREAKING REPORT: Mike Lindell declares that after the fraud lawsuit he will soon be filing, "Donald Trump will be BACK IN OFFICE in August."

The pillow salesman has been a staunch supporter of Trump for much of his presidency. He even sold pillows using an aggressive pro-Trump marketing campaign, including offering discounts with codes inspired by the former president as well as the QAnon conspiracy theories. During the episode of the podcast, Lindell also spoke about his upcoming social media site.  "It is going to be the most safest, securest and able to handle a hundred, two hundred, a billion people," he said, according to Newsweek. The network is expected to be built around "free speech" and will be a combination of Youtube and Twitter. Currently, the domain shows a static webpage. The project —named Frank—will attract "major influencers" and "average Americans" and let them post videos, articles, and information without robust moderation policies.

The chances of Mike Lindell being heard by SCOTUS is about the same as my chances of spontaneously becoming the Queen of England.

But there are people out there who are legitimately dumb enough to believe him.

Then, in September, they’ll move the goalposts again. https://t.co/q9vUUUzawu

Issuing a takedown on big tech players like Youtube, Google, Amazon, and Apple, he said: "None of these guys are going to be able to take this down. We're gonna all come over there. All the influencers... all these people that can't say on their podcasts the word 'Dominion,' or they can't say 'vaccine, a vaccine is bad for you." It's unclear whether the service will be made available on any of the app stores.