Natalie Bell uses them for her daughter with a cochlear implant in the event of a crash and has designed covers for many disabilities. 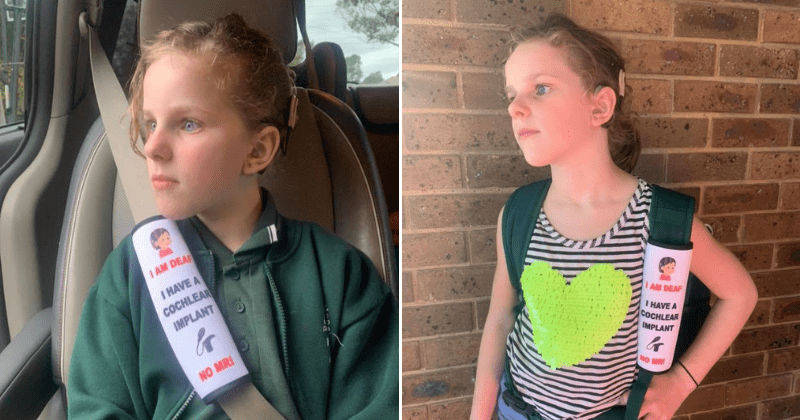 Child safety is paramount when considering traveling and going around with your kids in your vehicle. Many an accident can be limited to just damage to the vehicle if adequate safety measures are set in place within the car. One mother from Victoria, Australia decided to take things into her own hands as she designed a custom seat belt for her deaf daughter. Natalie Bell's little girl Shae has a cochlear implant, which means she can't undergo an MRI scan. Natalie designed her own seat belt for her daughter so that in the event of an accident, she hopes that it will help her access the best possible care. One must remember that the driver is also at risk in case of an accident and may even be incapacitated to help other people in the vehicle out.

According to her website, Bell figured that this idea would help children with various disabilities in much-needed ways. She has designed a version of the seat belt for people with autism and Down syndrome too. She took to social media to spread the word of these covers that she is currently selling on her website for around $12 (AUD 16).  It has definitely been a successful venture so far as she received an incredible amount of attention and praise, with over 46,000 comments and 750,000 shares.

Bell went on to explain the reason she created and distributed these covers.  "I always wonder what would happen if I was in a car accident with my daughter in the car and I was unable to let the doctors know that my daughter could not have a MRI due to having a cochlear implant, now I don’t need to worry about that with these seat belt covers. These can be made for any special needs that the medical team will need to know if you are unable to tell them."

The covers are made with Velcro, so they can fit on school bags as well as seat belts. Bell explained to ABC: "It's a safety thing ... because anyone can be a first responder at the scene of an accident."
"So having the details and they're clear, they're noticeable, it's the first thing you'll see when you open up that car door."  She went on to add that since her post had gone viral, she had been inundated with praise from her parents, the local firefighters, and even the police. "I did not expect it to go worldwide," she explained.

The bright and bold letters of her covers are quite easy to spot in an emergency. This is in order to be more obvious to different members of the public as they are usually the first on the scene of an accident, and not the ambulance or police. "The bracelets are amazing, but you don't always look for a bracelet and they can be covered by clothes," said Bell. Diabetes Victoria chief executive Craig Bennett also told the outlet that this is a great idea and would help children with type 1 diabetes who need to take insulin regularly. "If there was an accident, it could be helpful for paramedics, bystanders or medical responders to be aware of relevant health conditions for those involved in accidents," he said.

Speaking to Daily Mail, Bell said that the idea has been working out well for her. She has received thousands of inquiries about these covers. Bell later added that she had also launched her online craft store as she was looking for something new to do after the birth of her last child. The comments she received on social media summed it up pretty well, the outlet reported. "My husband is part of Fire and Rescue and said that this is a brilliant idea. Such a valuable piece that provides a lot of information clearly so that person involved can approach situations with knowledge and care," one woman said. While another commenter added: "This is also a great idea for adults with dementia."