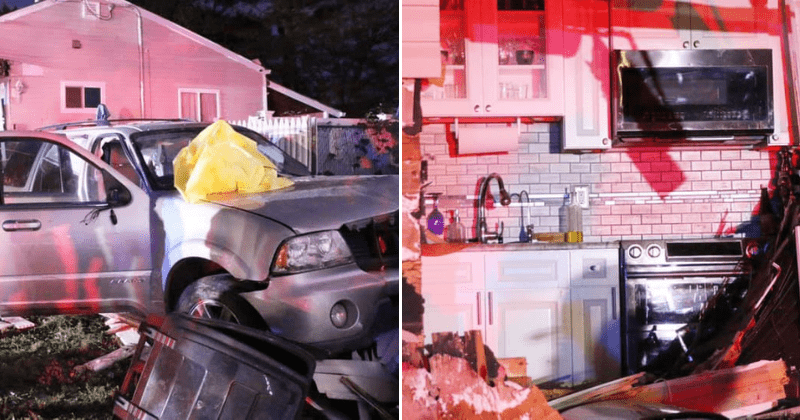 In a horrific incident, an out of control SUV with three children plowed through the kitchen of a house. The mother of the children was driving in an intoxicated state. The incident occurred in Brentwood, New York on Sunday evening. The woman driving the car was identified as 34-year-old Ashley Thomas-Smith who was arrested by the Suffolk County Police. Her car came crashing through a house located in the Brentwood neighborhood before coming to a stop on the lawn of a neighboring house, the police stated. There were no serious injuries sustained but Tomas-Smith was treated for minor injuries.

The crash was captured on camera and shows how the car, a Lincoln Aviator, was completely out of control. It could be seen speeding down the road before riding on to the sidewalk and flipping onto only two tires and slamming into the Reyes residence. “When I opened the camera in my phone to see, I just saw that the whole kitchen was down,” Angelica Reyes told CBS Local. Luckily, the family was not at home that evening as they were at a friend's house. The security camera detected movement in their driveway and when Reyes checked her phone, she was shocked to see the aftermath of the accident.

“I’m just glad that we weren’t here," she told KMOV 4. Their kitchen was left in pieces and the car only came to a stop on the lawn of another house. “She was stuck in the car for an hour because the fridge was stuck on her door,” Reyes said. In addition to the driver, the car also had three young passengers aged, four, five, and eight whose screaming could be heard even as the car crashed into the house. The three little girls were fortunate enough to have walked away unscathed. The people from the neighborhood helped the kids out of the car. According to the authorities, the children were later released to the custody of their father at the hospital.

According to the Center for Disease Control and Prevention (CDC), there is a death caused by driving under the influence every 50 minutes. That means, every day, 29 people in the United States die in motor vehicle crashes that involve an alcohol-impaired driver. The economic cost of alcohol-related crashes comes up to $44 billion annually. When the Third Precinct officers responded to the scene of the accident, they found that Thomas-Smith was intoxicated. Thomas-Smith along with her daughters were taken to Southside Hospital in Bay Shore. The mother was treated for non-life-threatening injuries.

Third Squad detectives have charged Thomas-Smith of Bay Shore, with Driving While Intoxicated, Aggravated Driving While Intoxicated with a Child Passenger 15-Years-Old or Younger (Leandra’s Law), and three counts of Endangering the Welfare of a Child. She is scheduled to be arraigned at First District Court in Central Islip on October 5th in Long Island. It is unclear if she has a representative. The Lincoln Aviator was impounded. “God bless the kids. God bless the newborn, and I apologize for the kids,” Thomas-Smith said about the two-month-old of the Reyes household. Her driver's license has also been suspended.

“When you drunk, you don’t drive, especially when you have your kids in the car. That’s terrible. I don’t even know what was passing in her mind,” Reyes had to say about the situation. Her family will have to stay elsewhere since their house has been deemed unfit for occupation. "This is my sister's house and they have three little boys who are always playing right in the area," Estefany Reyes told News Day. "We were just so thankful to God ... because that's exactly where we would be. We were just there the night before as a family."