The mom wondered if maybe she had spoken too soon to her child. 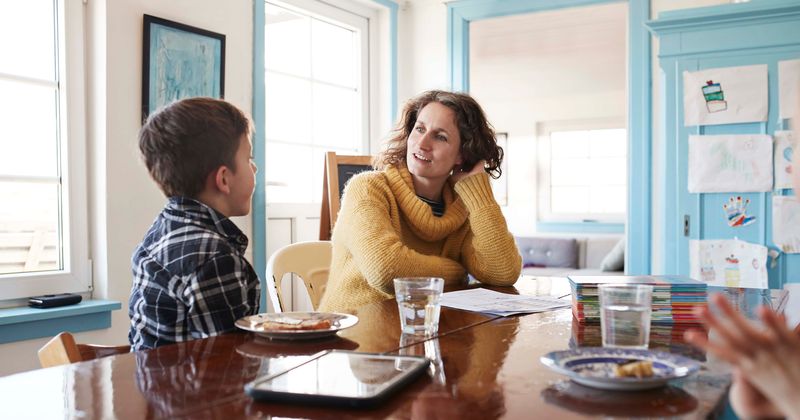 When is the right time to talk to your kids about where babies come from? Is four years old too young? Is using the accurate biological terms too graphic? According to the Australian parenting website Raising Children, it’s never too early to talk with your child about sex. Children should be able to feel okay about coming to a parent for reliable information. An honest and open conversation can actually help a child make healthier choices about sex when they’re older. The website even encourages parents to make the first move, stating that the parent could be the one to even start a conversation by asking, ‘Have you ever wondered how you were born and where you came from?’

One mom posted on Reddit about the time her son came to her with a similar question. Redditor sprinkle862910’s boyfriend was resistant to the idea of sharing facts about where babies come from with such a young child. The OP turned to the “Am I the A**hole?” (AITA) subReddit to ask if she was in the wrong for laying down the facts for young son. She wrote:  I have a 4.5 year old son, his father and I are divorced. I am pregnant with my boyfriends baby and I just told my son tonight that he’s going to be a big brother. My son asked how the baby will come out, so I told him one of two ways, either from the mother’s vagina or they have to cut the mommy’s belly open and take the baby out, sewing it back shut after. I said either way mommy will be fine. My son responded fine to it and just said “okay” and moved on.

She continued, saying: When I told my boyfriend tonight that I was so happy that my son was so excited about being a big brother, I was mentioning what we talked about and I told him about the above discussion. Bf said he thought it was weird and inappropriate to give a child this information. I asked what he would have said and he said he would have placated him and gotten out of answering it. I left the convo feeling upset that he had to pick on what I was doing as a mother, when I was trying to tell him how positive the whole thing was. He said that he doesn’t think it’s wrong to tell me his opinion and if I’d rather, he just won’t tell me his opinions. I feel it was insensitive and unnecessary to criticize me for just trying to give my son legitimate information. AITA?

Fellow Redditors responded to the mom's concern. Ambitious-Writer-825 said: The earlier and more matter-of-factly you talk about sex/birth/body functions, the easier it is for them to not be embarrassed when talking about body functions. You go girl. You did the right thing. There are too many teens out there who were "placated" when they were young that have no idea how sex works because their parents are embarrassed or think they're too young. What you said was very age appropriate. Get your guy one of those children's books on sex so he can see how it's done.. NTA. Judge, Jury, and Excretioner pointed out: NTA. He said that he doesn’t think it’s wrong to tell me his opinion and if I’d rather, he just won’t tell me his opinions. It is a really, really bad sign when your four year old handles difficult discussions more maturely than the father of your next child.