22-year-old Alice Bender, who goes by the name ComingUpFern on social media, is a "mom influencer" who has courted controversy for promoting many other half-truths. 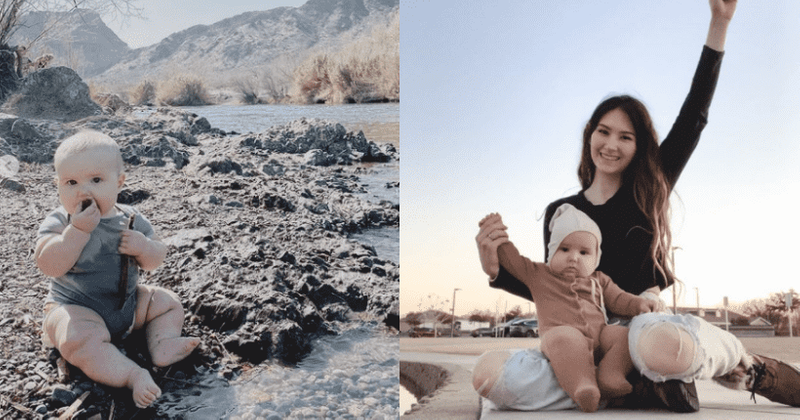 There's no dearth of wannabe celebrities on social media who dole out unsolicited suggestions by the dozen on all and sundry topics. "Mom Influencers" make up one such group who believes speaking their mind on motherhood and child care is their birthright. While nothing stops them from doing this, things tend to become dangerous as they often start giving out unscientific advice. What's worse is that there are people who actually take such posts seriously. An upcoming mom influence is a woman named Alice Bender, 22, who goes by the moniker "ComingUpFern." The mother-of-one is known for her controversial takes on everything from baby food to sleep timings of a child. Perhaps the most galling one is her claim that her baby eating sand and licking dirty shopping carts helps boost his immunity.

According to a CafeMom report, Bender put out a video on her TikTok on April 19 answering a question from a follower who asked, "Why do you let [your baby] eat sand? This was in response to several queries about a video she uploaded, where she showed her son, whom she refers to as "Baby Fern," eating things like sand and stones. In the video, the child is seen near a lake, clutching sand and putting it inside his mouth. The Arizona mother even gives her baby a brown rock, which the 8-month-old starts licking and then tries to eat. In the video answering the question on the matter, she said, “Why I let my exclusively breastfed baby eat sticks, rocks, dirt, sand, and (lick) unsanitized shopping carts ..." The explanatory video also shows Fern eating all of the aforementioned things.

Bender said further, "In the last 100 years, the allopathic industry has taken the world by storm. This did not happen by accident, it happened after a series of billion-dollar campaigns intended to shift the public’s perspective on health." While there's no denying there are scientific studies like this that say a person's immunity is built in childhood by exposure to germs, the matter is however not as simple as Bender explained. Not only are there bad bacteria, but there is also the possibility of a baby choking on things which is a common cause of death. In fact, choking is said to be the fourth leading cause of death among babies who are aged five years and below. The usual items of choking are food and toys. Bender has propagated many such irrational and nonsensical half-truths.

There was this one time when she launched a tirade against formula food and had another illogical view that a child's sleep cycle should not be "dictated." She called breast milk "incredible," and "the original medicine" according to CafeMom while adding, "It's not a coincidence that babies only have this instinct while they are breastfeeding for a reason. Our milk is there to protect them while they build their immune system." In an interview with Fabulous, she added, "I do not think formula should be legal based on the higher mortality rate in formula-fed infants. Most women who formula feed are not even aware of the risks. There are so many options for donor milk. I even donated milk on Facebook after my daughter passed. We sell non-human breast milk at the store, why not human milk? It doesn’t make any sense."

On her child's sleep cycle, she said, "It is not possible to force someone who does not want to sleep to sleep. Mainstream parents just train their babies to lie there silently, I don’t think sleep training actually helps babies get more sleep. It just teaches babies they can’t rely on their parents to come when they cry for them. Fern was on a pretty consistent routine of waking every hour between 12am-12pm, but lately, he’s been going through a growth spurt and sleeping mostly during the day." She has also called cribs "baby jails" and said mothers who are willing to die for the babies were "sweet", which became quite the talk on Reddit.