The family spends an average of $300 every week on groceries and goes through 66 cartons of milk, and 600 nappies 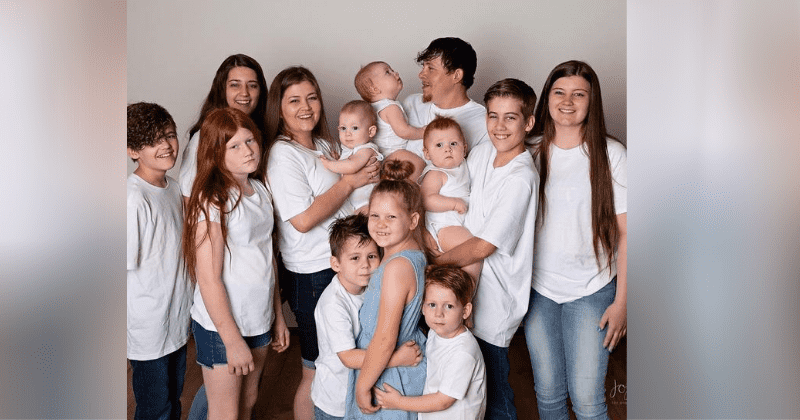 Andy Warhol once said, “one's company, two's a crowd, and three's a party.” Then what does having 11 kids mean? The mother of these children is Britni Church, 31, from Arkansas City, Kansas, and is a strong believer in the concept of "more the merrier." She had her first child just after her 16th birthday and has since been pregnant for almost a decade, according to the Daily Mail. To an outsider, her life may seem like the movie Cheaper By The Dozen, chaotic, loud, unruly. However, this is the exact misconception she wants to clear up about having a big family.

Speaking to Cafe Mom, Church said, “We are just like everyone else. People assume a lot of things about us that just aren’t true." Contrary to what most of us would believe from the portrayal of big families in films and popular media, she says her life is actually not an endless cycle of chaos. Sure, she admits that it may take a little longer to get her kids out of the door in the morning, with the help of her husband, Chris, but it's not as bad as we make it out to be. In fact, she is even considering having more kids despite the extra-large bills they get every month.

Crizman is her oldest daughter, aged 15. Following her are Jordan, 14, Caleb, 13, Jace, 12, Cadence 10, Jesalyn, eight, Silas, five, Christopher Jr, three, and one-year-old triplets Oliver, Asher, and Abel. The cost to feed these many mouths is obviously a lot. They spend an average of $300 every week on groceries. They also go through five boxes of cereal, 66 cartons of milk, and 600 nappies in a flash, reported The Sun. “I never planned to have 11 but I wouldn’t change it for the world,” she said. Originally, she only wanted to have three children. Now she wants to have at least four more to round off the family at 15 kids.

“My [current] husband and I met when I was a single mom of six,” she explained. “I had my oldest five with my now ex-husband and then my sixth child has a separate dad from the others.” She also hails from a family of nine and her husband from a family of eight. The two meet in 2014 while at work and things started to look up for Church then. The following year, they got married and had their first child, Silas, together. It was Church's seventh child. “Chris calls them his own though and treats them all as his own kids,” she said about the 28-year-old.

"It does not feel like I have lots of kids – it feels normal," the mom said, adding that she has grown to love the constant company she gets from her super-sized family. “If any of the kids said, ‘you can’t have any more’ l would accept that it’s too much.” After their eighth child though, the couple was hoping to buy a house and decided to wait before having another child. However, she found out that she was pregnant again. Chris really wanted to have a daughter this time. The eldest daughters were hoping for the same as well. Instead, they were surprised with not one but three boys, who were born last year.

“I love having a big family - there’s always someone to talk to," she stated. "We get lots of stares when we go out as a family. We’ve had people buy the whole family dinner on multiple occasions because they’re so impressed how well behaved the kids are." She added, "If things go well, we hope to build a house in the country by a large pond as Chris loves fishing. We’d love to get some animals too. Maybe two dogs and a cat would be a good start."