Jaylin Schwarz from Odessa died hours after she was denied breakfast and was ordered to jump for extended periods of time in 110-degree heat by her legal guardians. 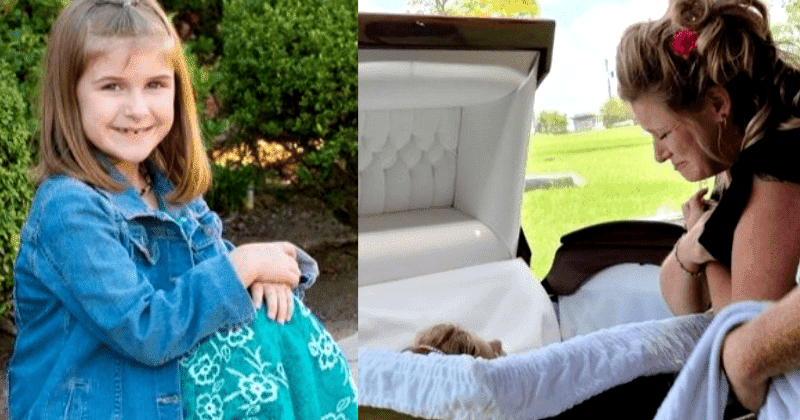 In October this year, we reported the case of an 8-year-old Texas girl dying of dehydration after her guardians forced her to jump on a trampoline for hours as punishment. Jaylin Schwarz from Odessa died hours after she was denied breakfast and was ordered to jump for extended periods of time in 110-degree heat. And now, according to Fox17, her mother Alysha Anderton has spoken out about the tragic nature of her daughter's death, apologizing to her late daughter for not being there to rescue her from the hands of her deplorable legal guardians. "I was surprised it wasn't more than just dehydration because the little girl that I saw in the casket did not look like an 8-year-old girl. She was so, so tiny. She was so tiny," Anderton said, with tears streaming down her face.

"The most important thing I needed to tell them was that I’m sorry. I’m so so sorry that I didn’t bring you back home like I promised you that I would," she added. As per a New York Post report, Anderton was stripped custody of her two daughters Jaylin and Jayde four years ago due to her struggles with addiction, and the court decided it best for the children live under different guardians because she failed to sufficiently deal with her issues within the stipulated time. That's when Child Protective Services sent the girls from their Forney, Texas home, to live with their mother's stepsister Ashley Schwarz, and her husband Daniel Schwarz. Describing the moment she saw her young daughter dead and in a casket to CBS7, Anderton added: "And then, oh, I still remember it like it was yesterday. The first time I saw her in almost four years she was lying in a casket and that’s not fair. That’s not fair to me. There’s not a day that goes by that I don’t totally break down.”

The crestfallen mother said that she didn't get a proper chance to say goodbye to her children when they were taken from her. She continued: "What upsets me the most is that I never got to see her alive again. When they took them, I never got to say goodbye. So I’ve never had closure for the past four years. I hope she knows my heart now and she knows that I was trying very, very hard to get to them and I could have saved her." The Schwarzes were arrested and charged with capital murder on October 12 after medical professionals determined the cause of death. Speaking after the arrest, the Odessa Police Department sent out a statement and said: "Investigation revealed that the 8-year-old child had been punished and was not allowed to eat breakfast and was required to jump on the trampoline without stopping for an extended period of time." It added, "Further investigation revealed that the 8-year-old child was not allowed to drink any water because she was not jumping."

At the moment, the mother is drawing comfort from knowing that her daughter is buried nearby and goes to visit her grave every day. "If that’s all I get now, I’ll take it," she added. "I’ll take it and I will treasure it for the rest of my life. If that’s all I’m given when it comes to her if that’s all I’m given I will take it any day ……. And I will make it beautiful just as she was in life.” Anderton is embroiled in a custody fight to keep her other daughter, who is now placed in custody under the Schwarz family babysitter. In the meantime, a GoFundMe page has also been started to help Anderton financially and take care of her legal fees.