The tiny velcro-like balls get stuck easily to hair and has been described as a nightmare by multiple parents. 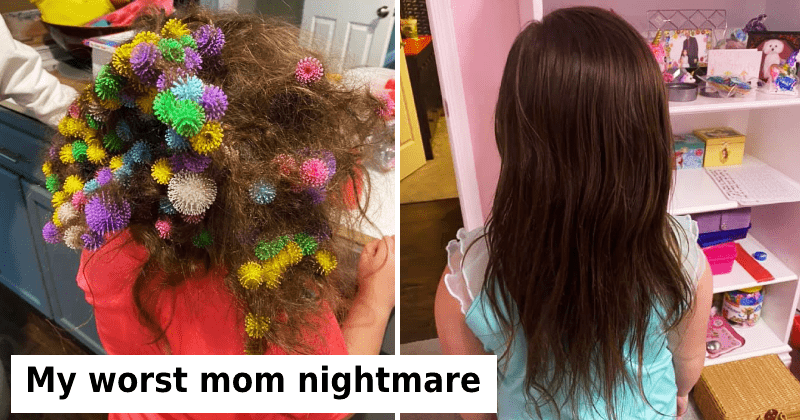 When you're a parent in charge of young kids, there's no routine. Pretty much every day is straight-up chaos. Lisa Hoelzle experienced that for a while but it went to a whole new level when her daughter walked up to her with 150 tiny toys stuck in her hair. Hoelzle, who hails from Pennsylvania, said it almost took her a whole day to remove the toys and straighten out a daughter's hair. She described it as her "worst Mom nightmare," reported PEOPLE. Lisa Hoelzle shared a Facebook post about the incident. It all started when her kids Noah and Abigail, both aged 6, were playing downstairs by themselves. They were done with their virtual school for the day and were playing with Bunchems, tiny Velcro-like balls that easily get stuck together, in their basement.

Noah, who Hoelzle labels a prankster, dumped a full container of Bunchems on his sister's head. Hoelzle couldn't believe what she was seeing when Abigail walked up to her with the toys stuck in her hair. "I think I had an out-of-body experience," said Lisa, referring to the moment she saw her daughter's hair. "She had about 150 of these things layered and matted in her hair." Lisa Hoelzle added that kids had already made it worse by trying to remove the toys by themselves. "They made it worse trying to remove them because they connect together kinda like Velcro."

It didn't take long for Hoelzle to figure that this was going to consume her whole day. It took her three whole hours to remove just 15 of the Bunchem balls out of Abigail's hair. Hoelzle needed more hands for the task. When her husband Dan got home, they did some research on how to remove the toys from their daughter's hair. The more they researched, they started to "realize the severity" of the situation. They did their own experimenting but only compounded their own problems. "It suggested using conditioner and vegetable oil to loosen it but that made it worse and so messy," said Hoelzle. "If we cut them out because of how deep they were she would have winded up with a short pixie cut. It crushed my heart and I just couldn’t in my heart give up without trying my best to get them out," she wrote.

The pair took turns untangling the toys from Abigail's head and Dan managed to extract 10 more balls by 1 am. They decided to call it a day and continue with their work the next morning. Hoelzle had Abigail sleep with her head on her mother's stomach to prevent the toys to get tangled any further. The following morning, Lisa went in a different direction and purchased mineral oil and a detangling comb as she mentally prepared herself for yet another long day of toy removal.

It was a painful process for Abigail but they managed to successfully remove all the toys. After "a lot of tears" and 20 hours of "pulling and working them out of her head and lots of hair loss," all the toys were finally removed. Following this, Hoelzle spent more than an hour applying conditioner to her daughter's head. Hoelzle's fingers were swollen at the end of the ordeal but she's thankful they got through the "awful situation."

She hopes the now-viral post will raise awareness, among other parents, of the dangers of playing with the sticky toy. "This will be something we will never forget, very traumatic experience in the Hoelzle household this weekend," she said. Bunchems were discontinued last year but are still available on some platforms, reported New York Post. A spokesperson for Bunchems’ manufacturer, Spin Master, told Kennedy News & Media wire service that “Bunchems packaging and directions clearly state: ‘Caution: Keep away from hair. May become entangled.’” Reviews of the product on Amazon were filled with complaints of Bunchems getting stuck in hair.