Jackson, the one-year-old child isn't the only biological sibling of her adopted son Grayson. There is Hannah as well, who the mother adopted in 2018. 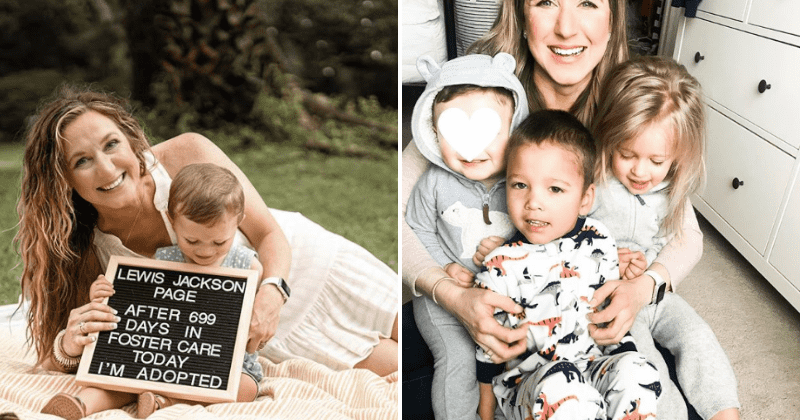 The story of a Colorado mother, who ended up adopting biological siblings in a lucky coincidence, had gone viral in 2019. Her children, Grayson who she adopted in 2017 and Hannah, who began to foster the same year shared the same biological mother. Two years after Katie Page officially adopted Hannah, she heard about 1-year-old Jackson, another biological sibling of the 3-year-old girl and 4-year-old Grayson. "The minute I held him, I was so overjoyed," Page told Good Morning America of meeting Jackson. "I said, 'This is their brother, this is their family'."

It was only a month after adopting Grayson in May '17 that Page got a call about Hannah, who was in need of a foster home. The mother immediately took the girl in and saw that there were several similarities between the children.  “There were features on the babies that were very similar. They both have a chin dimple and the other feature is one that only a mama would see because it’s covered by their diaper!” Page told People magazine last year. According to Page, she believed that the babies came from different mothers at first as they had different names listed when placing the babies for adoption. Furthermore, no one at the adoption agency remarked or suspected that the babies were in-fact siblings.

When she first started opening up to the possibility that her children were actually related, her family and friends did not really imagine it could be true. Eventually, she confirmed the news with a DNA test proving that Hannah and Grayson did indeed have the same mother. Page said that this made it a lot easier for her to adopt Hannah in December 2018. "[The caseworkers] told me her story, which was really similar to Grayson's," Page recalled. "I saw her medical bracelet and the first name of her mother was the same name as Grayson's mom. She didn't have a typical name.". Both children had been exposed to methamphetamines in the womb, according to Page.

"[With Jackson] she gave false information again and he was going to go with another foster family, until the caseworker stepped in," Page noted. "When Jackson came along I just felt the best I could give him are his family and siblings that he identifies and feels connected to."

And now, just last month, Page has become the  proud parent of Jackson, her third-child and shared the news via video teleconference. Thirty loved ones were present for the adoption, including Kaci and Dustin Whitney of Bartow, Florida, who are the adopted parents of the older sisters of Page's children. "We did not know about Grayson until we were told it was too late and he had already been adopted. There was not much information on him," Kaci told GMA. "We kind of had a feeling, an intuition, that [they] had siblings. We had found out about Grayson and Hannah the same day."

"As moms you feel like you have a duty to say, 'Hey, we fought for you,'" Kaci said. "It didn't work out how I thought, but it worked out how it should." Dustin said, "It's about fighting for them to stay with their siblings." He added that all the kids recently met: "The bonus is Katie [Page] is like a sister to us now."

It has been a happy time for the entire family as all the siblings got a chance to meet during a beach trip to Florida.  "This was a dream my heart desired long before I knew these girls existed. I cried and mourned the day I adopted Grayson with the heavy weight on my heart that all I would be able to tell him was that he was abandoned just hours after birth and that I knew really nothing else about his family," Page captioned a photo of all the siblings together on Instagram. "Today, THIS is Us 🥰," she continued. "Three sisters and a brother now sit beside and will grow up with him. He has more love and family members that love him than I ever dreamed possible. "