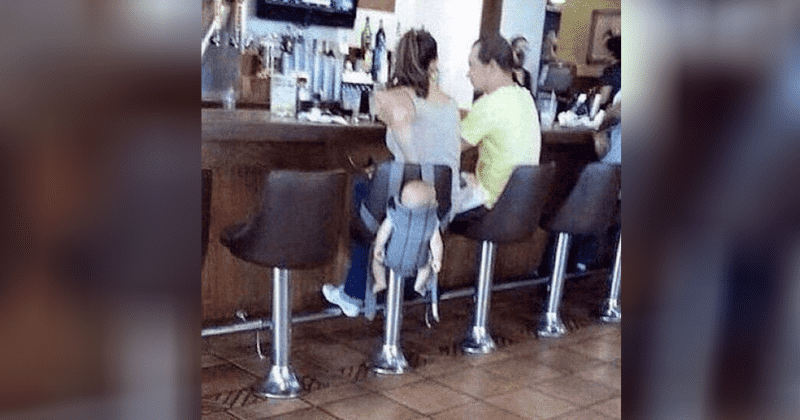 A photo of a mother who strapped what appears to be a three-month-old baby in a carrier at the back of a bar stool while she enjoyed a drink with a man has enraged a lot of people reports the Daily Mail. The viral photo once again found its way onto Reddit two years ago leaving most people being outraged at the apparent child neglect. Many Redditors were infuriated as they voiced their disapproval over her lack of parenting skills, although there were a few that did come to the mother's defense.

The whole thing just screams 'we don't care about this baby', and being that open about it is pretty trashy, one Redditor commented.  Another Redditor added that it was a terrible example of parenting. As a parent with a toddler and a 3-month-old... what the f**k? No. Your child isn't a back pack or coat. Don't hang them casually on a bar stool, they chastised.  That baby could suffocate in that position. Very dangerous, said user dooloo. The primary issue here was that the child is hanging at the back, and out of view. Were the child placed somewhere in front of the lady, it might have been easier for her to keep an eye on the baby. "I just picture someone walking by and hitting it in the head pretty hard. So unsafe. Idiot parents noted treeveins.

But there were others who found this technique nothing short of genius and looked at the picture in a humorous way. Rewtyman said, "Now this is a woman that knows how to be efficient. Another stated:  "I'm conflicted, I'm angry at her disregard for her own child, yet I find it a little funny. I don't know, I hope the child is ok. A third left a cheeky comment writing: That baby is real Irish. Drank straight from the bottle, s**t his pants threw up, punched a lady, then cried himself to sleep.

Considering that the child was not crying or in any apparent distress, it might have been excused that the woman chose to place her baby like that. Yet, it doesn't exactly scream responsible parenting. Some people questioned if it was a real baby. Is that even a real baby? I'm thinking it might be a doll, like for one of those projects where they need to take care of one for a while," said Redditor just_testing3 to which another user stillstillstill replied: Yeah the way the feet and hands are positioned looks very doll-like... There's a weird kind of curve that doesn't seem... natural at rest. However, most believed the baby was indeed real.

In the woman's defense, some Redditors claimed that it was not a bar and that they were merely eating food so she would have had it under control. I don't see the problem? She needed a place to put her baby while she got something to drink. Obviously, she was parched, said widlfire2k5. Some opined there was nothing dangerous going on as user HawaiianSoopaman wrote: Not defending her, but try looking at the photo. Those stools are bolted to the floor. They are not going to fall over. In a detailed comment, blaghart said: Soooo, I'm just gonna throw this out there but that reeeeeeeeally doesn't look like a bar. That looks like a coffee shop or a diner. I feel like a lot of this is a judgment for the idea that she would drink with her child in public, but honestly, this looks more like "single mother getting back into the dating scene and didn't have a babysitter today", or "couple is out with their baby and stops for coffee." I'm curious what exactly everyone else thinks she should have done. Keep the baby strapped to her chest and konk its head on the countertop and wake it up screaming? Squish it by leaving it on her back?