Mother Of 15 Is Pregnant Again Just 4 Months After Giving Birth To Youngest Baby, Wants To Have More

Patty Hernandez, 38, has been giving birth to children for over a decade since 2008. All her kids have names starting with the letter 'C' 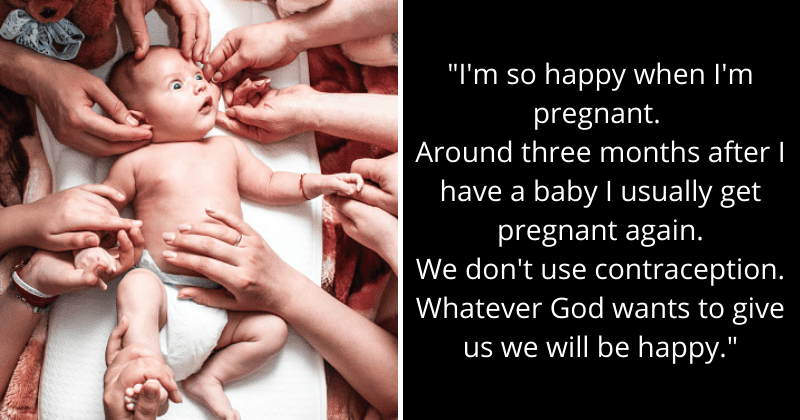 Many people might consider a family of five or six to be a "big family." Then what would a family of 18 be called? Most of us have only encountered a big family in the form of films like Cheaper By The Dozen. From the movie, we get a general idea of what having so many kids under one roof can feel like. But the Hernadez family has to live that way every day. Patty Hernandez, 38, and her husband Carlos, 37, already have 15 kids. Now, they will be welcoming their 16th child. They have a big family but the mother says she would not mind having more kids.

Patty has been giving birth for over a decade. She had her first child in 2008 and has since given birth almost annually. With 15 kids in the house, she admits that things are "always crazy at her house." Of the 15 kids, there are five boys and ten girls, and six of the children are sets of twins, reported the Daily Mail. Twins happen to run in Carlos's side of the family. "I'm so happy when I'm pregnant," Patty said. "Around three months after I have a baby I usually get pregnant again." This is exactly how her 16th pregnancy is going. The 15th baby was born just earlier this year.

The couple doesn't use contraception and has 'left everything up to God' https://t.co/cYjXqKfLV1

A fun tradition in their household is that all the children have a name starting from the letter "C." This is in honor of the children's father, who works as a floor cleaner to support his large household. The kids from the eldest to the youngest are Carlos Jr, 12, Christopher, 11, Carla, nine, Caitlyn, nine, Cristian, eight, Celeste, seven, Cristina, six, Calvin, five, Catherine, five, Carol, four, Caleb, three, Caroline, three, Camilla, two, Charlie, one and Crystal, four months. The youngest of the brood will be a baby girl due to join them in May 2021.

"It is a bit more stressful and difficult with a newborn, Patty admits. "The babies are always crying and I have to take care of them. But it is a blessing, we enjoy it. We have left everything to God so whatever God wants to give us we will be happy. We don't use contraception." They currently spend a whopping $500 a week on groceries and diapers alone. They are also considering upgrading their 16-seater bus for a new vehicle since they have already outgrown it. Now, Patty has started recruiting her older kids to help her with household work.

Mum with 15 kids pregnant with 16th baby - and all have names beginning with 'C' https://t.co/WzFE9R6thf pic.twitter.com/5C00XRQGxu

"Right now I have a thousand clothes to wash - that's at least five hours of folding clothes every two days. I do laundry at least four times a week," she explained. "When the kids play, they often leave toys on the floor so I need to clean that up too. I try to give them a daily routine to clean up after themselves. They have their own chores. The older one makes his own pancakes sometimes, but most of the time I am the one doing the cooking." But despite the hardships, they are one big happy family. But Patty had never thought she would have so many babies, according to Mirror UK.

She said, “People ask me all the time, ‘are they all yours? Everybody’s amazed when they find out how many kids I have, especially because I’m such a petite person." The big family of 18 are devout Christians who pray every day in the morning. Before the pandemic, they had a smooth functioning routine. 'The kids would be sent to school after breakfast and would come back home again to have dinner together. "I try to do everything while they are at school because that's when I have the freest time," Patty had said, when the family had made it to the news last year. "If I have an appointment I take all of them with me."