The activist managed to document the entire ordeal and shared it on the internet. 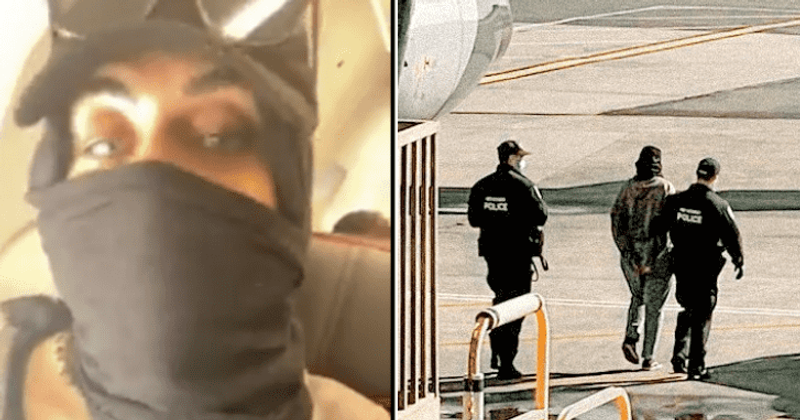 A Muslim activist and blogger, Amani Al-Khatahtbeh endured a horrifying travel experience when she was removed from an airplane. The incident began in the airport where there was first an uncomfortable altercation at security. After that, she was removed from the plane and later even arrested. The reason for the escalation of events was because one of her co-passengers, a White man sitting in first class, told the flight staff that he "felt uncomfortable". Al-Khatahtbeh is the founder of the blog Muslim Girl and is also an astute social media user, who documented the entire ordeal in real-time from the beginning to the end. Between her Twitter and Facebook profiles, there are over 60,000 followers and all of them got to spread the word of the incident fast.

I had the craziest experience in TSA this morning.

An entitled white man behind me insisted on cutting me in line because I was “still taking my shoes off.”

When I said he could wait like everyone else, he started going off about how he’s “pre check” and “first class” 1/3

Al-Khatahtbeh began the update by going live on Facebook and simultaneously tweeting about the incident as she began to encounter trouble and discomfort during her trip through the security check. She went on to say that a White man had jumped the line in front of her and rushed through security screening machines, without any complaints from the airport staff. The blogger was wearing a veil throughout the experience, and she explained the man's actions in detail was an illustration of his privilege. She went on to dramatize the clear double standards that she was experiencing at the airport.

Y’all know if I, a VEILED MUSLIM WOMAN, had the audacity to throw a temper tantrum and run through TSA security, I would have gotten BODIED. I would have been detained, missed my flight, possibly gotten charged, etc.

We need to resurrect the @muslimgirl #ShitTSASays column. 3/3

This is the @AmericanAir manager coming onboard to tell me that they're removing me from my flight because "there is a passenger onboard who doesn't feel comfortable" with me. pic.twitter.com/pwBS5NkvAn

Regarding that incident, American Airlines, who operated the flight that both Al-Khatahtbeh and the man later boarded, offered up these details to Indy 100: “Both PreCheck and non-PreCheck screening were consolidated into one open lane.” “Our understanding is that Ms. Al-Khatahtbeh believed the other passenger, who is enrolled in PreCheck, was getting favorable treatment because he was allowed to proceed through security while she was removing her shoes.” Unfortunately for her, things only got worse as she boarded her flight. The same person who had jumped the line in front of her during security went on to tell the flight staff that he was feeling uncomfortable sharing the plane with her. It was even more of a surprise that he would do such a thing when he was up in First Class and she was sitting back in coach.

Regardless of that, American Airlines crew members acted upon the uncomfortable man's insecurities and demanded that Al-Khatahtbeh de-board the plane. Thankfully, the activist managed to document everything and share it on the internet. She initially refused to leave the plane and stood firm on her rights. She also turned the tables and went on to say that the man was making her feel uncomfortable. As she defended herself for about 7 minutes, the flight crew and company decided to remove every single passenger from the plane. “A man in first-class complained about me after he harassed me in TSA, and said that I, the Muslim woman, made him feel uncomfortable," she said. “So American Airlines, rather than de-boarding that one singular man, attempted to de-board this entire flight to save one person in first class.” “They first tried to remove the Muslim woman–rather than take both of us out they just wanted to take me out, take his word for it. And when I refused they de-boarded the entire plane.”

After news of the incident was circulated widely, The Council on American-Islamic Relations (CAIR), a Muslim Rights nonprofit group came to her aid and support.  Regarding the incident, CAIR National Executive Director Nihad Awad told Business Insider: “Although we do not yet know all of the facts about this incident, we do know that American Airlines has a history of mistreating Muslim travelers. The airline must immediately explain why it singled out Amani by contacting the police and ejecting her from a flight based on the word of a man who had allegedly harassed her.”