The livid woman posted screenshots of her exchange with her so-called friend who asked her to announce that she had lost her baby or not come to the wedding at all. 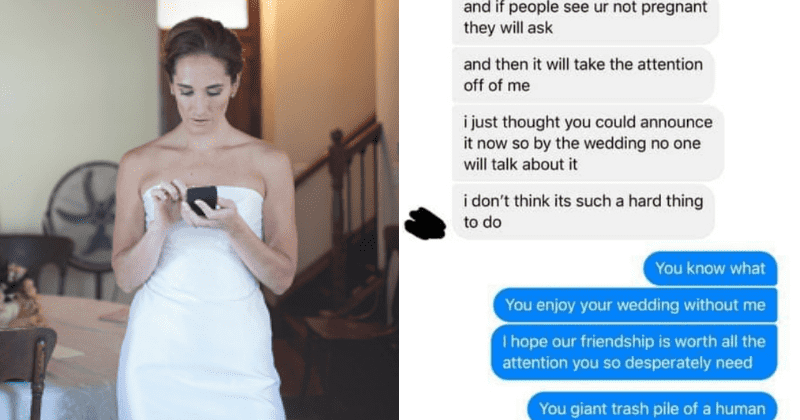 The grief that comes with the loss of a child from stillbirth is difficult. Dealing with it will require the constant love and support of those around you. Processing loss is not the same for everyone. It is important to understand the pain the parents feel for their unborn child. And they could very well do without friends who have no empathy for their condition.

A woman who had just experienced stillbirth shared the nasty exchange she had with a so-called friend in a viral post. This bride-to-be had a very unreasonable request from her wedding guest that would infuriate anyone.

The unidentified woman posted on a Facebook group called "That's It I'm Wedding Shaming." Screenshots of her post were posted on Imgur. She first started off by saying that the interaction she had with a bride had rattled her and as she was trying to calm down. During this time she had to shame the bride for what she has just said to her. "This dumpster fire of a bride is getting married in early February and I would've been heavily pregnant as I was due at the end of February," the resident of Brisbane, Australia wrote. "But my daughter was stillborn in October."

She went on to explain that it had been a difficult time for her and her partner who were still coping with the loss of a child. "Up until now everyone has been understanding and kind to us," she said. And then there was this bridezilla, who was not only insensitive but also rude and selfish. She attached screenshots of the exchange. Her friend asked her if she was still thinking about attending her wedding. "I think maybe you shouldn't. I don't mean to be harsh but I thought you'd be over what happened by now," she said. "But you cried today just because some lady had a baby and it's just a bit dramatic and lots of people don't know yet because apparently, you aren't ready to tell people."

The bride then went on to explain, "I'm trying to be as nice about this as I can but everyone will be asking why you aren't pregnant and I don't want them to be distracted from making me feel special. What happened sucks but I thought you'd had long enough to get over it so it wouldn't be a problem." The woman was shocked at the heartless request and needed some time to process what she was just told. The bride went on to say that she wanted the wedding to be about her and if she attended the wedding it would be ruined.

"So let me get this straight," she responded. "You don't want me at your wedding because the fact that my f****** baby died might ruin YOUR day," she wrote. She then let the bride know that she wouldn't have to be worried because they won't be friends anymore. The bride told her that she was twisting her words and that she only meant she wanted all the attention on her. She then asked her friend again to just announce her stillbirth so people can focus on her now and then they would be able to focus on her wedding. The livid friend said, "You know what... you enjoy your wedding without me."

Deciding to cut off ties with her she said, "I hope our friendship is worth all the attention you so desperately need you giant trash pile of a human." The bride then called her "selfish" for not being able to get over the stillbirth after two months. "It's not like you knew her," she added insensitively. The poster was done with this and said she was glad she realized that her now ex-friend was "trash now so I don't waste any more time speaking to you." In a final clap-back, she told the friend that she would see her fiancé at the divorce party.

Social media users were furious on behalf of the woman. One social media user, according to The Sun stated: "I can't express how much contempt I have for this woman. My warmest of love for you and strength to continue to heal." Another person said, "Wow! Grieving is a process, different for everyone. What a colossal b****. Better off without that negativity in your life."