On October 12, 2000, suicide terrorists exploded a small boat alongside the USS Cole—a Navy Destroyer—as it was refueling in the Yemeni port of Aden. 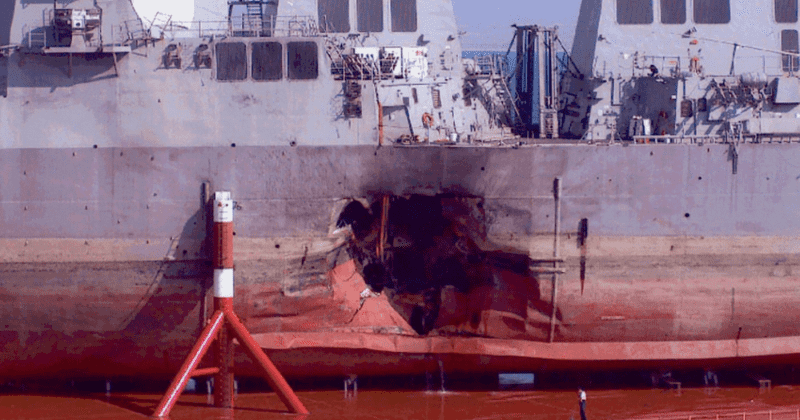 Twenty years ago, The USS Cole, a guided-missile destroyer, was attacked by suicide bombers while refueling in Yemen. The explosion took place on Oct. 12, 2000, and blasted a large hole in the hull of the ship, claiming the lives of 17 US Navy sailors and injuring 39 others. At the time, it was touted to be the deadliest attack against a US Navy destroyer since 1987. This tragic event went on to foreshadow the 9/11 terrorist attacks, which would go on to take place less than a year later, 13NewsNow reports. There is now a memorial for the victims at Naval Station Norfolk, which was dedicated to the shore of Willoughby Bay one year later.

20 years ago we lost 17 shipmates in an attack on USS Cole. Please join us today as we remember those who were tragically lost, pay tribute to heroic actions of the crew and reflect on our responsibility to carry their legacy forward #Remember67 https://t.co/cUedsuETHN

Similar to 9/11, the terrorist group known as Al-Qaeda went on to claim responsibility for the attack, and a US judge later ruled that the country of Sudan was responsible for the attack. Yet another judge went on to release more than $13 million in frozen Sudanese assets to the families of those sailors who were killed. Due to this attack, the US Navy reconsidered its rules of engagements. The rules in 2000 had disallowed the destroyer's guards from firing on the small boat prior to the explosion, which was not known at the time. However, the small vessel had definitely not obtained permission from the captain of the USS Cole to approach.

LIVE: Ceremony to honor the 17 crew members who died in the attack on #USSCole, 20 years ago. #HonorThem https://t.co/kxI76yLG2l

Following the attack, then-President Bill Clinton released a public statement and proclaimed that the attack was a "despicable and cowardly" act of terrorism and promised to find those responsible. Later reports cited Al Qaeda terrorist Jamel Ahmed Mohammed Ali Al-Badawi to be the mastermind behind this attack. Al-Badawi was killed in January 2019 when a Predator drone hit his vehicle in an isolated attack when he was driving alone in the Ma'rib Governorate located in central Yemen. Until then, he was one of the top terror figures of the FBI's most-wanted list and the US State Department had a $5 million reward offered for information that led to his capture.

#OTD in 2000, the USS Cole was attacked by suicide bombers who severely damaged the ship and killed 17 sailors. Chief of Naval Operations ADM Mike Gilday has asked the fleet for a moment of silence at 11:18 a.m. (local) today to remember those who were tragically lost. pic.twitter.com/Q9vuPC29ES

Al-Badawi was originally arrested by Yemeni authorities in December 2000 for the USS Cole attack but escaped from a Yemen prison in April 2003. He was recaptured nearly a year later but managed to escape again in February 2006. Aside from him, another Al Qaeda terrorist, Abd al.Rahim al-Nashiri, was also a leading member of the USS Cole bombing. Al-Nashri was actually the first individual to be officially charged for the attack and has been in US custody since 2002, awaiting trial at Guantanamo Bay since 2006.

Today is the 20th anniversary of the USS Cole bombing. 28 pine trees line the path to the memorial. They represent the 17 victims and the 11 children who lost their parent during the bombing. Learn more about the memorial: https://t.co/NtKthCoCrb. #NeverForgotten pic.twitter.com/mDXdqSGntR

The 17 sailors who were killed were:

"Twenty years later, it is important to recognize how these acts of bravery and heroism were nothing short of extraordinary. Immediately following the blast and uncertain of the possibility of further explosions, Cole Sailors courageously ran to the scene and rescued severely injured and trapped shipmates, saving them from further injury and probable death," said Chief of Naval Operations Adm. Mike Gilday in an address to the fleet. "The example set by the Cole sailors is clear: a well-trained crew, even after a devastating blow, can rise to the occasion and save their ship."

#ZBHistory: 2000-The USS Cole, refueling in Aden harbor in Yemen, is struck by a small boat piloted by 2 men carrying up to 700 pounds of C4.

The blast rips a 40x60 ft hole in the hull of the ship, killing 17 sailors and injuring 37. pic.twitter.com/wXv7SWymlC