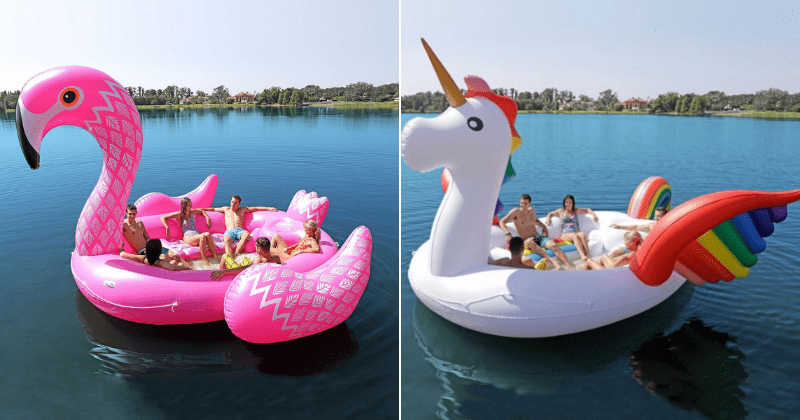 Though we just passed Thanksgiving and gearing up for one heck of a holiday season, it's never a bad idea to start making your summer plans already. The ongoing pandemic still gives us reason to be cautious but here's something that has taken shoppers by a frenzy. People are going wild over a new range of giant pool inflatables that can fit up to six people. They are basically trendy floats, which are available on US-based online retailer Sam's Club. These giant inflatable pools come complete with cup holders, benches, and built-in drinks coolers, making them the ideal lake party house.

Sam's Club is selling a giant pool float that fits six people — here's what it's like https://t.co/k7fd3IL9sZ pic.twitter.com/grMz6wHz3d

They cost $149.98 (£108) and are officially classified as holiday accessories that come in a range of vibrant designs including a flamingo, unicorn, and peacock, Daily Mail reports.  "My heart and bank account can’t handle this", one tweeter wrote in excitement, according to the outlet, while another went on to state it would make a perfect party accessory. "We need it. Think of the time spent floating on the lake this summer," another person wrote. Twitter users were all in praise of the 9ft by 16ft wide floats after a photo was shared online. Dozens of users on social media spoke in earnest about these floats, with many describing them as "the dream" and "simply amazing".

Sam’s Club FTW! 🙌🏼 Check out these giant pool floats selling for $149. I think I better get for my parents pool. 😂 which one you like? pic.twitter.com/9XbtTPFnTA

One major perk of the inflatable floats is that they are all very spacious. Looking at the difference between the designs, we find that the peacock is the only version that doesn't feature a seating area and built-in cooler. However, like the others, it does have a flat sunbathing area and plenty of room for people to recline and relax. These inflatable pools are extremely practical, despite their large size. Customers have claimed that it takes just around 20 minutes to completely inflate them with a single hand pump. Happy shoppers also stated that these floats can be easily towed behind a boat and they faced absolutely no problem in transporting it on or off the water.

Also, it was noted by users that the slightly smaller peacock does not offer the same dedicated seating. However, it does boast of a sundeck that has enough space for three adult persons to lie down side-by-side. Insider reported previously that Sam's Club added to their lineup of gigantic floats for adults with an 18-foot long airplane that fits up to six people. The new plane float from the brand is about 18 feet long and 17.5 feet wide and has a built-in inflatable bench seat, cup holders, two coolers, and even a built-in boarding system. The design is made up of heavy-gauge PVC that inflates quickly and deflates with a quick release safety valve so you can pack it up with little difficulty.

On their store website, the brand wrote as a description: "Whether you want to ride, play, or lounge–this mega-sized Member's Mark Island is designed for fun. It’s large enough for the whole family–kids and adults will enjoy being out in the sun together. The novelty float includes an inflated rear swim platform with handles for easy mounting and dismounting, cup holders, and two built-in coolers. Inflatable seats provide comfortable seating for plenty of friends to hang out."

The reviews for this product were out of the world too. "We took this to our family reunion. We had the best time with it. We tied it to a dock and just floated all week long. It stayed inflated the whole time. It was very sturdy, as some "unsteady" adults jumped in with no problem." wrote one happy customer. Another added: "Great float, came sooner than expected. It is big but you can definitely carry it with only 2 people. Blows up quick with my dewalt air compressor under 15mins and ready to go."