The Reddit thread was flooded with responses, reminding us yet again that there's a whole lot of good out there. 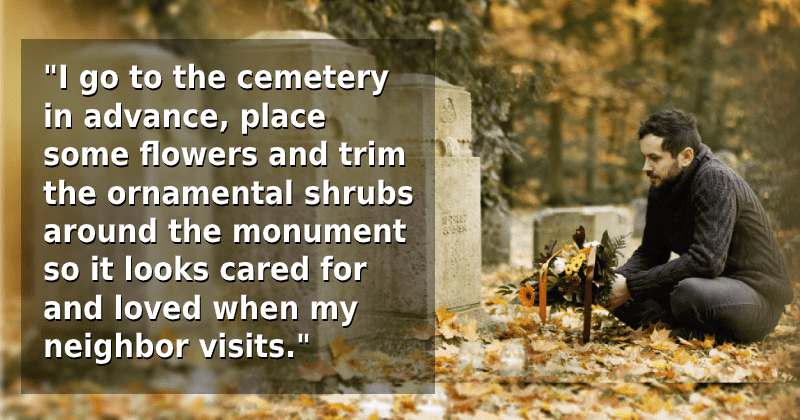 It's one thing to do a kind deed for someone, but it's another do it without expecting to be commended for it. A Reddit thread showed there are a lot of good souls out there doing to the good deed for their family, friends, and even strangers. u/indeed_indeed_indeed asked on Reddit: What's the nicest thing you've done for someone without them knowing you did it? and the replies are wholesome. As they say, it never hurts to be kind. Here are some of the most heartwarming deeds of kindness on the thread.

Love, is to be cared for
Several times a year I take my elderly neighbor to the cemetery to visit her husband's grave. What she doesn't know is that before we visit there, I go to the cemetery in advance, place some flowers and trim the ornamental shrubs around the monument so it looks cared for and loved.
— Back2Bach.

Friends have your back
Had a friend who got super drunk, partially naked, and extremely... loose-lipped during a party (she started talking about her (dead) daddy issues). It was humiliating enough for her in the moment, but I noticed one guy and his buddies trying to film her as well. So, I sidled up to them later and then flirted my way into "borrowing" his phone (subtlety isn't usually my M.O., but I didn't want to risk it). Deleted all six videos the sh*t stain had recorded on there and then f*cked off (with my passed-out friend and one other to help carry her both in tow) before he had the chance to realize what was up. She woke up the next morning and had zero recollection of the preceding night. I did not mention it to her.
— hauteburrrito.

Break the ice with gum
We had a German exchange student at my school with her and it was her first day and she was very clearly stressed and having a hard time. Halfway through the class, she was called down to the office to have a meeting with the other exchange kids, I'm guessing it was to get to know them better. But that meeting turned into an hour-long meeting where the next class would have started by the end of it.

So towards the end of class when everyone was lining up at the door for the Bell to ring I packed up all of her (exchange student's) stuff and put it neatly back in her backpack and threw some gum in there for her. I didn't know I had her next class but she came in chewing gum.
— ZaleAnderson

Secret Angel
A friend of my wife is a single mom, her son is on the spectrum and overweight and was therefore a target for bullies. She signed him up for some self-defense classes but could only afford 2 or 3. He really enjoyed the classes. I went into the dojo and prepaid a couple of months' worth. Never even told my wife. Her friend called my wife super excited thinking another friend paid. I just let it slide.
— Headoutdaplane

This one's for grandpa
I bought my cousin's wedding dress. She fell in love with one but couldn't afford it so settled for a cheaper one on a payment plan. I went back, had them order the nicer dress, paid it in full, and let her discover it when they said it arrived. She still doesn't know it was me. Our grandfather had bought the wedding dresses for every other of his granddaughters getting married but he passed away before she was engaged. It was my way of making sure he was part of her day.
— razorbladedesserts

Looking out for family
When my brother had pneumonia and was hospitalized, I knew his wife wouldn't leave the house for shopping due to her anxiety and depression. So I ordered an online shop delivered to their door with 2 weeks worth of shopping, pack lunches, treats the lot. To this day they think her dad must have arranged it since she had been crying to him over the phone a few hours prior. He thinks he must have forgot he ordered it.
— UndeadMaidenBMS

A girl I work with applied for the same job as me. When I found out we both got an interview, I withdrew my application. She got the job. She was struggling, wanted out, and just needed a break. Should've seen her face when she told the team she got a new role.
— svbass13