A live stream of a daycare center classroom showed White kids being fed before Black kids in Georgia, sparking accusations of racism against the center. 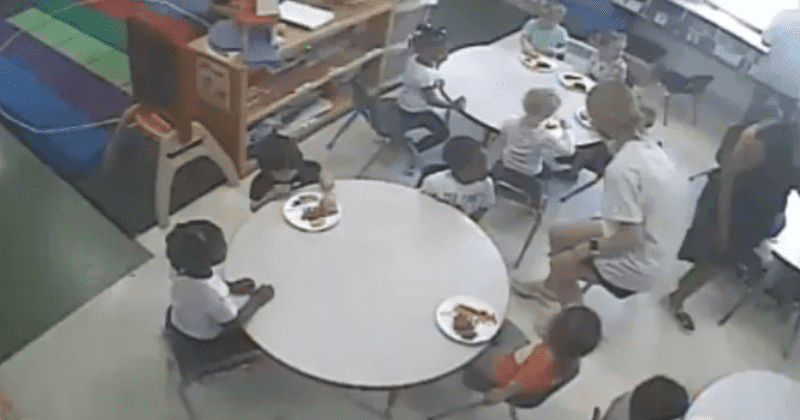 In a shocking image that is now going viral, White children are shown to be having food on their plates while Black kids were not. This picture came from a live stream of a daycare center classroom in Georgia, where serious allegations of racism have now been issued against the center. The classroom at the Kids "R' Kids location was supposedly being live-streamed so that parents were able to see how their kids were doing throughout the day while they were elsewhere. One parent of a 2-year-old boy Adryan McCauley noticed something rather surprising. The White children at the center were eating lunch while the Black children were not. McCauley took a screenshot of the situation, which showed all the children sitting at different tables, with plates of food only being present in front of the White children.

This is horrible, but unfortunately not uncommon. When I went to preschool they didn’t feed me or teach me, I literally got ignored the entire day every day. And obviously I’m not black so I can only imagine how they would’ve treated me if I was

“They were skipping all of the black kids it seemed like,” McCauley told CBS46. “All the white kids got their lunch, and all the black kids had to wait. From the videos and pictures that we saw today, we are just completely disturbed.” According to McCauley, the boy's brother had "immediately" gone to the Roswell daycare center to pick him up after seeing what was on the live stream. He went on to add that she would eventually confront the director of the center while there. “‘I’m not really sure because I’m not in the classroom, maybe it’s a dietary thing,’” he recalled the director telling the child’s mom.

The Daily Mail reported that the family of the 2-year-old later posted the screenshot onto social media, where it went viral. “This is truly unbelievable. You better know this won’t be the last time you hear from me on this,” user @marquis_dagreat wrote, along with the screenshot. “Why does every white kid have their food? Not one black child has food in front of them! Thank God for cameras in classrooms because there is no way to hide this racism!” “In the year 2021 this is truly unbelievable. As blacks, we always strive to send our kids to schools in Suburban areas [sic], but I’m telling you first hand that is not always best,” they continued. “This is not a black or white issue this is simply wrong!”

I can not believe my eyes and their is no way you can explain this one. I am totally upset and my kids don’t even go there. People should protest outside their doors. Racist people listen up that crap you use to get away with, days are gone.

The account also tagged the Kids 'R' Kids corporate office in its post, so they definitely wanted to make their intentions clear. The corporate office responded on Thursday by calling the screenshot "disturbing" and soon cut ties with the specific location in question. “Our company has decided to terminate that franchisee’s Kids ‘R’ Kids contract and branding, effective immediately, leaving them to operate independently,” President and CEO David Vinson said in the statement, posted to Instagram. “We apologize to the family, the community and all of those impacted by this situation and will use this as a learning tool to remind our Kids ‘R’ Kids staff on the importance of diversity and inclusivity,” Vinson went on to clarify that the corporate office will help locate alternate preschool options for families displaced by the decision.

While it still remains unclear if the daycare will continue operations, their reputation has certainly been taken for a toss. It would take some serious renovation, rehabilitation, and apologizing on their part to win the trust of the community again. Dee Gillespie, the director and owner of the location, said, per Daily Mail, “We know the act was random, and the photo doesn’t show the entire room; we believe if the parents viewed the videos they would understand. “I wish they could see the compassion we have,” Gillespie reportedly added.