The man was relaxing in a park in Germany when a family of boars sneaked up on him and ran away with his laptop bag. 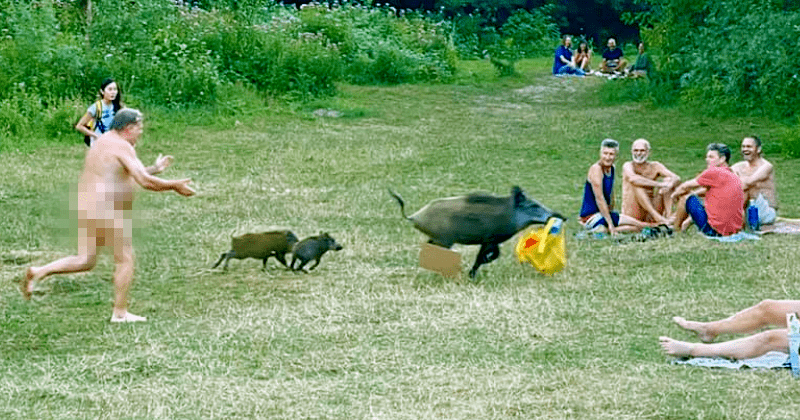 The joy of lying naked in the outdoors on a sunny day is an unmatched experience. You are completely uninhibited and feel one with nature. What should have been the perfect day out for a man in Germany turned into a story his family will retell at every thanksgiving. The man was relaxing in the park, fully naked, when a family of boars sneaked up behind him and nicked his laptop. The man who had already shed all his inhibitions went one step further and chased after the boars through the park, while fully naked, with the intention of retrieving his laptop.

The incident happened at a popular bathing spot in Teufelssee, a place west of Berlin. The incident in itself is so bizarre that we wouldn't have believed it if Adele Landauer hadn't provided the receipts. Adele Landauer luckily was at hand with a phone camera to capture the priceless moments. "In Berlin, we are free people. We love to bathe in the sun and lake like we are born. So, there were many people laying on their towels completely naked. Many of us were scared but the wild boars seemed to be peaceful," wrote Landauer. "They found this yellow bag and decided to take it away. But the man who owned it realized it was the bag with his laptop. So, he was very focused and run behind the boars in order to get it back," she added.

Landauer, who's an actor and life coach, posted pictures of the naked man with his buttocks hanging out, running through the park as the others watched on. The onlookers could all be seen laughing at the man chasing the small boars, who were making away with a yellow packet that seemed to contain his laptop. The images went viral on the internet.

Adele Landauer showed the pictures she captured on her phone to the person concerned. She sought his permission of the guy before posting the hilarious images on Facebook. She wrote: Nature strikes back! Wild boar hunt at Teufelssee! In the yellow bag is the man's laptop, so he gave it his all in Adam's costume. I then showed the photos to the man, he laughed soundly and authorized me to make them public. The man is definitely a sport but it's not a big surprise considering Germany has a strong tradition of naturism during the summers. They call it Freikörperkultur, or FKK for short, which means 'free body culture.' Adele Landauer didn't post the guy's name but we can imagine he must be flooded with messages and calls after the images went viral on the internet.

The man didn't run through the park naked for nothing in the end. He managed to retrieve the laptop bag and also gifted laugh to all those present. Adele Landauer had nothing but good words for the man and called him a winner. "The photos are really going around the world - who would have thought?" she wrote before adding, "The man is a real hero, a winner, he ran for his goal, even if naked, to reach his goal!

Adele Landauer visited the park later and ran into the boars yet again. This time they were not hatching any plots to steal any laptops and were found peacefully co-existing with the humans at the park. "No one really cared much because they all felt comfortable with each other. I have a dream one day we all will live peacefully together. All the different nations, cultures, religions with all their different viewpoints of life. Maybe this scene shows how it could happen," she wrote. "Human beings and wildlife are pretty big contradictions but as we see we can make it together. All beings on planet earth could live peacefully together," she concluded.