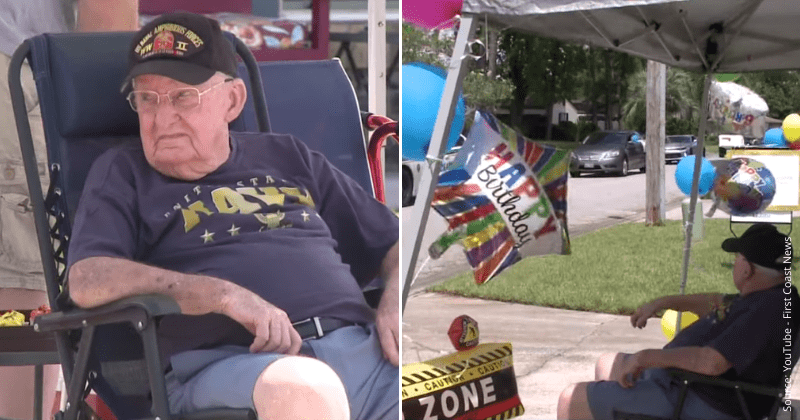 World War II came to an end officially on September 2, after it started in 1939 and ended in 1945. It has been 75 years since it ended and it is considered to be one of the deadliest wars in history with over 50,000,000 lives lost. The war also brought an end to Nazi rule in Germany. Devastation followed the war but the brave soldiers helped preserve freedom and democracy in the world. Today less than 3 percent of WWII veterans who fought and managed to survive the war, are still alive today. Among them is Howard Joseph Schmahl who just turned 95.

Schmahl was a former Signalman 3rd Class and was well-known as Mr. Bud. "When I was 17 I decided I wanted to go in the Navy," he told First Coast News. He was sent off to Normandy for D-day when he was still a teenager. His job as part of the US Navy was to lower the ramp on the Higgins boat and push forward soldiers onto Omaha Beach. He was to remain on the boat and run load after load to the beach. At least that was the plan for him. Unfortunately, his boat was damaged. "The beach was a disaster," Schmahl recalled. "I don't like to talk about it."

After the boat gave out, Schmahl had to get out and join the troops himself. In the second wave, he had to run onto Omaha Beach without guns or weapons of any kind. Thinking back about his time in the war, Schmahl can't help but choke up. Other than miraculously not being hit by German machine guns, which he says, "I was lucky," he could not seem to forget the sacrifice the soldiers made during the war. As his eyes well up with tears, he remembers the carnage and acknowledges how the heart-wrenching scenes from Saving Private Ryan and The Longest Day were portrayed accurately.

He urged people to go visit the soldiers who gave their lives for the sake of their country during the war, and there were more than 2,000 American soldiers who died. He wants people to see the white crosses of  Normandy in the cemetery. But Schmahl managed to survive the war, and now almost eight decades later, he is celebrating his 95th birthday. He did not think people would show up to celebrate his birthday. But the residents of Orange Park, friends, family, and other well-wishers turned up to wish the veteran a very happy birthday, in accordance with the social distancing guidelines.

A couple of dozen cars, including those of the deputies from the Clay County Sheriff's Office, honked and waved in a drive-by birthday parade for Mr. Bud. His family was also present and said of the veteran, "He's a saint," and always humble.

Across the country, people have been holding drive-by parades for surviving veterans, thanking them for their service. CBS Local reported that the American Legion Auxiliary held a drive-by parade at two nursing homes in Cleburne, Texas. "The American Legion Auxiliary has been serving for over 100 years now, our veterans, and our military and our communities and we love our veterans," said Marty Peters. "And we hope that this conveys that to them even though we can’t give them a hug."

In Chicago, Robert Larson, a World War II veteran who served in the U.S. Navy said about the signing of the instrument of surrender, "A heavy burden had been lifted from my life. I knew that my future now was going to be not Navy, but whatever I was going to choose" He added, "It meant everything in the world." Another WWII veteran, John Faust, said, "We had a job to do and we just did it. And hoped we could survive. It's a great country regardless of all the small problems. I call them small problems that occur from time to time." Faust added, "I enjoy living in this country. I would fight for it today if I had to."