The incident comes to light right after an Oregon sheriff's deputy was put on administrative leave with relation to another problematic video that went viral. 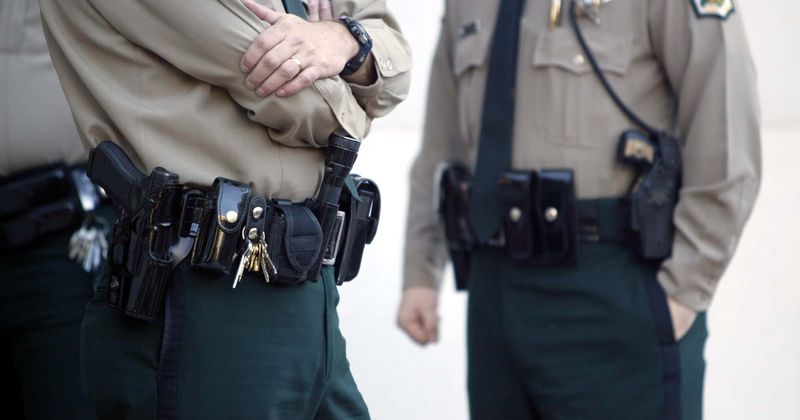 A Clackamas County sheriff's deputy was allegedly caught on camera giving militia members tips on how to get away with using lethal force on someone. The now-viral video is said to have been recorded amid raging wildfires in Oregon and was posted online on September 11 by freelance journalists. According to Raw Story, the video shows a recent interaction between armed militia members and a man who identifies himself as a sheriff's deputy, who gives the others tips on how to use lethal force without facing any criminal charges. The incident comes to light right after an Oregon sheriff's deputy was put on administrative leave with relation to another problematic video that went viral.

"You're heart's in the right place but the fucking courts these days don't care where your heart is."

Video of what appears to be sheriffs instructing a militia on how to avoid legal trouble while setting up these checkpoints to stop "antifa." https://t.co/uzu63Br1Fv

"Don't get yourself in a situation where you lose your rights because you pushed the limit. You all mean to do good, your hearts in the right place, but the courts nowadays don't give a sh*t where your heart is," the man is heard saying in the video. "Be advised, there are homeowners who have been prosecuted for murder because they killed some guy who was on their property. You have to prove serious physical injury or death. Now, if you throw a f*cking knife in their hand after you shoot them, that's on you."

This is one of two problematic videos that have recently emerged with connection to the Clackamas County sheriff's department. According to Oregon Live, a deputy was put on administrative leave after he was caught on camera claiming that "Antifa" was behind the wildfires that are currently ravaging the West Coast. His remarks seemed to give credence to unfounded rumors that have been strenuously debunked by law enforcement. "As soon as I was made aware of this incident, I moved swiftly to place this deputy on leave while we investigate," Clackamas County Sheriff Craig Roberts said in the release. "The Sheriff’s Office mission is to provide calm and safety especially during unprecedented times such as these. I expect nothing less of our deputies, and apologize to all in our community."

The deputy — identified as one Mark Nikolai — appears to be aware of the fact that he was being filmed while making the statements last week. "Antifa motherf*****s are out causing hell," he can be heard saying in the video. "There’s a lot of lives at stake and there’s a lot of people’s property at stake because these guys got some vendetta." According to Oregon Live, Nikolai is believed to be the same deputy who gave militia members tips on how to get away with killing people.

STATEMENT re: inappropriate comments made by Patrol deputy — https://t.co/36Bfv5Jlxg pic.twitter.com/6zgPC5qgq7

The Clackamas County Peace Officers Association — the union that represents law enforcement in Clackamas County — claimed in a statement on Saturday that the video was "sensationalized" and that he was simply "speaking freely with a community member about the community’s understandable fear of looting and other criminal acts as our County burns." The statement added: "But let’s not get distracted by a single, sensationalized, five-minute video of one of the hundreds of first responders working around the clock in our County. We need to fight the actual fires that are burning in our County. Let’s not stoke unnecessary flames."

The union also said in the statement that they have a "surprising number of criminals looking to capitalize, including attempts at looting evacuated homes and properties." However, it made no mention of the second video of Nikolai and also failed to address the armed people who have confronted media and community members in Clackamas County.