Four members of the family were shot and killed in the early morning hours of September 4 by a suspect believed to be the family matriarch's brother. 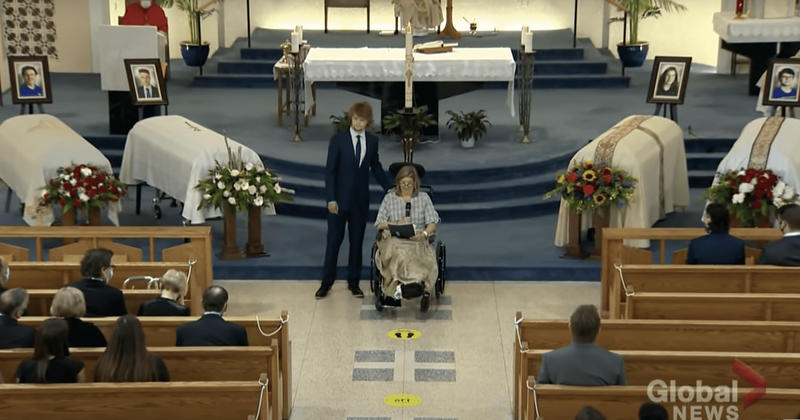 Loretta Traynor watched from her wheelchair as pallbearers carried four caskets bearing the bodies of her husband and their three children into the St. Mary of the People Parish in Oshawa, Ontario, on Thursday. Entering the church with and her only surviving son Sam by her side, Traynor — who was injured in the September 4 shooting that killed four members of her family — delivered a touching eulogy for her loved ones. The grieving mother described the joy her husband Chris, 20-year-old Bradley, 15-year-old Adelaide, and 11-year-old Joey brought to her life before their deaths nearly two weeks ago.

My heart hurts so much for Loretta Traynor and her surviving child, Sam. This should NEVER have happened. I am not anti-gun, but sometimes, I am so utterly physically, mentally and emotionally sick of the carnage. https://t.co/mNUxKtTPyw

HAPPENING NOW: A funeral is being held for 4 members of an Oshawa family slain in a mass shooting. Wounded survivor Loretta Traynor holds hands with son Samuel as the caskets of their loved ones arrive at St. Mary of the People Catholic Church https://t.co/p5jPftIM6t pic.twitter.com/AUQjwfbFP2

According to CBC, 51-year-old Chris and his three children were shot and killed in the early morning hours of September 4 by a suspect identified by police as 48-year-old Winnipeg resident Mitchell Lapa. Reported to be Loretta Traynor's brother, he died from a self-inflicted gunshot wound according to the police. Lapa, who was an "uninvited person" at the Traynors' Oshawa home, was largely cut out of his father's will as per court documents obtained by the publication. His sister and her children were the beneficiaries of almost all of her late father's estate.

Traynor's eldest son Sam was not home at the time of the attack. "My last words to each of them was that I loved them," she revealed on Thursday, describing her husband as a "social and adventurous" person who loved to make her laugh. "As you can expect after 23 years of marriage, I've pretty much heard all of his stories, probably about 23 times or more. But even so he tried harder than ever to find something that would make me laugh and once in a while he did. And boy did I laugh," she said. Speaking of her daughter, Adelaide, Traynor said she would most accurately be described as a "firecracker and a flower wrapped up into one."

Loretta Traynor, who was also injured in the Sept. 4 shooting, spoke alongside her surviving son Sam at a funeral service for their four family members and said getting from one day to the next is sometimes "an impossible task." https://t.co/MS2Nu8vUdA

"Adelaide was beautiful, smart, and she loved life," the heartbroken mother added. She joked that her son Bradley "had a groan for everything. And as a family, we were going to compile and publish a Bradley's groan manual for the people in his life. Bradley was kind, honest and loving, and you only had to look at his face and the way he interacted with anyone to see that." Her youngest son Joey, she said, had an "infectious laugh" that made "people want to pick him up and make him laugh even more."

Loretta Traynor is now eulogizing her husband and 3 children. “They were four wonderful people. I’ve been blessed and moved by all the loved you have shared” says Loretta thanking all those who have reached out and shared memories since the murders. Even strangers, Loretta says pic.twitter.com/1hPXFUT6bW

"It has been a week and we have all been in many places. We have been in dark places, devastated places, places of loss, and even places of happiness. We have all done, so far, what we've needed to do to get from one day to the next, and sometimes that seems like an impossible task," Traynor added. "Through all the thoughts and emotions running through me, I did realize one thing. That the light that has shone on our family in the last week and a half far outweighs the shadows I have felt. And with that, we can move forward."