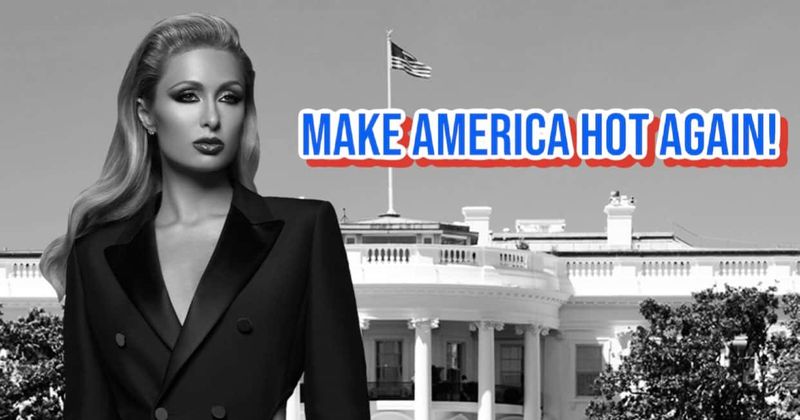 Hilton shared a picture of herself in a pink outfit, carrying her dog in one hand while waving to the crowd looking at her picture. She stood in front of a pink White House. She looked like Elle Woods from 'Legally Blonde' - a rather befitting character, don't you think? Hilton then posted a video "Paris for President" which featured her being interviewed and said that she would pick singer Rihanna as her running mate. Hilton's got even bigger plans as she wants to change the shape of the Oval Office into a heart. Another post showed her lying on the table while saying that there was a lot of redecoration to be done.

She added: After a lot of thought and consideration. I’ve decided the Oval Office needs some redecorating and a woman’s touch. ✨👸🏼💅🏻✨ As expected, Twitter had a field day with this piece of news. Ronald Short commented: We now have game shows for adults based off of tag, the floor is lava, and making cannonballs in a pool. AND on top of the current political mess, Paris Hilton (hopefully joking) and Kanye (wish he was joking) are running for president. It's like we saw Idiocracy as a challenge. TweetingEagle commented: I appreciate @ParisHilton running for President.

To aid her in her mission to restore America's prosperity, reputation, and fruitful relationship with strong partners around the world, I hereby apply for the office of Secretary of State under President Hilton. #ParisForPresident. When Kanye West announced that he was running for President, we reported that the rapper made the announcement on his Twitter account with a post that read: We must now realize the promise of America by trusting God, unifying our vision, and building our future. I am running for president of the United States! #2020VISION. The announcement sent everyone into a tizzy, with some calling West crazy while others praised him for making the decision.

Imagine Kanye West becomes President and this becomes the US national anthem... pic.twitter.com/t0Z6PkTYrB

Since making the announcement, West's post has been liked over a million times and has had thousands of retweets. However, a report on CNN stated that West had not completed a number of formalities to run for president - such as registering with the Federal Election Commission, presenting a campaign platform. He also needs to collect enough signatures to get on the November ballot. These are just one of the few requirements. He has also missed the deadline to register as an independent candidate in many states.

Back in 2018, West was famously seen wearing a red MAGA cap while meeting President Donald Trump at the White House and voiced his support for him. He even went on to call Trump his "brother." West has faced widespread backlash as a result of his support for Trump. When asked what he felt about such reactions in a WSJ Magazine interview, he said, "I’m a black guy with a red [MAGA] hat, can you imagine?. It reminded me of how I felt as a black guy before I was famous, when I would walk in a restaurant and people would look at you like you were going to steal something. ‘This is your place, Ye, don’t talk about apparel. This is your place, Ye, you’re black, so you’re a Democrat."