The incident is said to have taken place on a Tunisair flight bound to Tunis-Carthage International Airport. 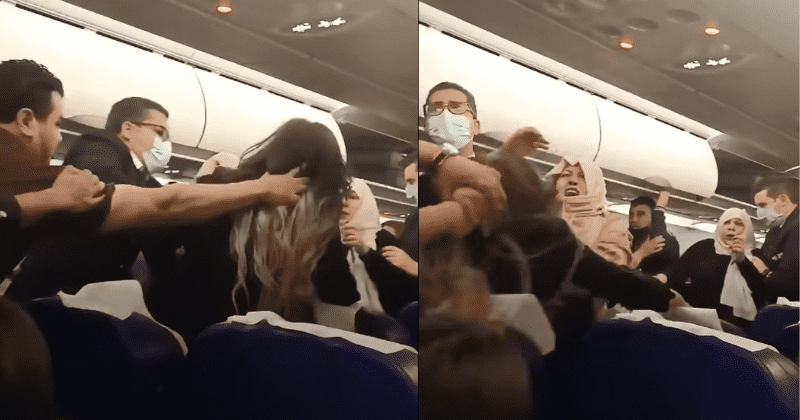 Cover image for representational purposes only

A horrifying fight over cabin luggage space turned into a full-blown brawl as a woman was pulled by her hair and punched while many joined in. The shocking video was reportedly captured on Tunisair flight TU216 at Istanbul Airport in Turkey, even before the plane took off on its charted course to Tunis-Carthage International Airport in Tunisia, on April 10. Airline officials said the massive brawl, which broke out about overhead baggage space, caused a five-hour delay after airport authorities pushed the flight to the back of the queue, Daily Mail reports. In the footage doing the rounds, we see two women pushing and hitting each other while a flight attendant tries to push a male passenger to the far end of the plane's aisle.

INCIDENT A fight broke out on Tunisair plane due to dispute between passengers https://t.co/POqXp2bO3V

Then a woman in a white top starts screaming and shouting at three women before jumping in to hit them in a bid to get past them. The fight doesn't seem to stop even as a flight attendant desperately tries to bring the situation under control by calming the passengers down. In another frame, we see the woman in a white top being held back by an older woman in a pink headscarf. Then, the male passenger, who was pushed to the back, makes his way back to the front and grabs the woman's hair, grips them, pulls her backward, and proceeds to punch her in the head. This continues even as the woman in the pink headscarf does all she can to pull the woman away but the man uses his strength to wriggle away before being attacked by the flight attendant.

The woman in the white top starts screaming at the man who just attacked her and thrashes to free herself as the older woman in the scarf tries to hold her back. The chaotic footage comes to an end with many of the passengers standing in the aisle and initiates a screaming match against each other. According to Business News, the brawl began due to a tiff about cabin luggage space on the plane. A spokesperson for the airline said the tussle caused a five-hour delay and added that an investigation is currently underway. By the time everything cooled down and the flight landed at its destinationm it was already 5 a.m. the next morning. At one point, the situation became so hard to handle, the cabin crew were forced to employ security teams to calm people down before it was allowed to take off. Ghassen Ouji, the spokesperson, said: "This fight caused a delay of five hours and financial losses were suffered by the company."

In another incident, an entire flight started speaking in Spanish after a racist man asked author Jaime Primak Sullivan to stop speaking in the language. Once she landed, the author took to social media platform Twitter to share her experiences and describe the events that unfolded after the racist man's remarks. In a tweet that went viral, with over 10,000 retweets and over 77,000 likes, Sullivan wrote: "This man just asked me to “please stop speaking Spanish” on this plane to New York City (in his defense, it’s very early and he’s racist) so the man next to him STARTED SPEAKING SPANISH and then the flight attendant and my GOD, I have never wanted to get up and dance more than I do now." The tweet prompted hundreds of netizens to jump in with a variety of reactions. Kirsty Farnfield responded: "I can’t speak Spanish but would probably have started swearing at him in a variety of other languages. I had a rather international upbringing and can swear in French, Dutch, German, Arabic, Turkish, and Hong Kong Chinese (had a Chinese roommate at school)."

If such an incident can happen on a flight, it means that the flight crew is poorly trained and @tunisair_info should be avoided by all means