With the help of technology, Nelson can be heard singing a duet with Cline decades after her death. 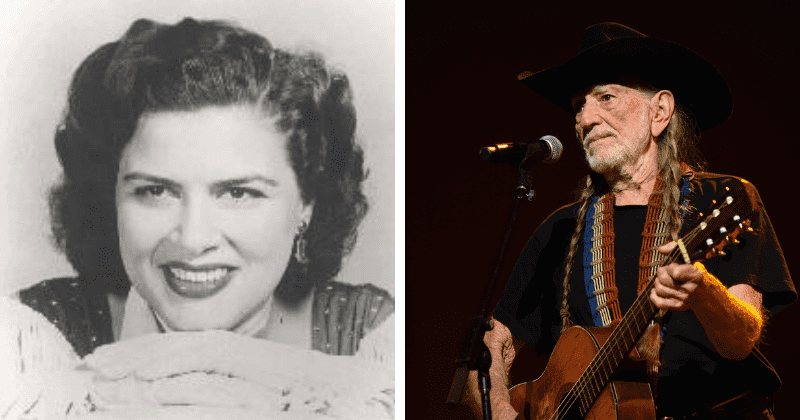 Country music singer Patsy Cline was only 30 years old when she died in a fatal plane crash outside Camden, Tenn., on March 5, 1963. Before her death, she'd been in two major car accidents as well. Despite her short life, filled with difficulties, Cline's music topped the country charts in 1962 and her stunning voice continues to be appreciated by music lovers to this day. According to her website, in 1973 Patsy was elected posthumously to the Country Music Hall of Fame.

According to Good Housekeeping, Cline who died along with fellow country artists Hawkshaw Hawkins and Cowboy Copas knew about the harsh weather conditions at that time. However, she supposedly refused fellow country music star Dottie West's offer to return to Nashville via car. "Don't worry about me, Hoss. When it's my time to go, it's my time to go," she said. It is believed that poor flying conditions and the pilot's inexperience were the reasons for the crash. Just a week before the plane crash, she reportedly told singer Ray Walker that she walks a fine line of life and death. "Honey, I've had two bad ones [accidents]. The third one will either be a charm or it'll kill me." Cline was just 30 years old when she died. She was survived by her husband, Charlie Dick, and her two kids, Julie and Randy, who were four and two, respectively then.

Singer Patsy Cline playing Las Vegas a few months before her tragic death in a plane crash in 1963. pic.twitter.com/UawJNdwG9k

As for her music, the beloved country singer was renowned for her talent. Songs like “Crazy,” “I Fall to Pieces,” and “She’s Got You,” were some of her most memorable hits. She turned out to be one of the most popular artists of her era. According to Classic Country Music, “Crazy” which is probably Cline’s most well-known work, was written by someone we all know now, who wasn't as famous as back in the day... Willie Nelson! The 87-year-old himself went on to become a country music legend. Despite that connection, the two were never able to record together. But now thanks to advanced technology fans can hear both their voices blend beautifully in a rendition of the gospel classic, “Just A Walk Closer With Thee". Have a listen below:

As for Nelson, the legend turned 87 in April and has released 70 full-length records since his début but admitted he found success only in his 30s, reports The New Yorker. In fact, he recently published Me and Sister Bobbie, a memoir co-written with his older sister Bobbie Nelson who is also a longtime piano player. In her interview, Amanda Petrusich asks, "Your second big hit after you moved to Nashville was “Crazy,” which was very famously recorded by Patsy Cline. You write that her husband woke her up at one in the morning to play it for her, and you thought, “I didn’t see that as a good way to get a lady to hear a song.” When that song took off, did you feel as if you could finally exhale? As if you had “made it,” whatever that might mean?" He replied, "Patsy Cline’s record of “Crazy” was a No. 1 all-time jukebox song. So, as far as money was concerned, I made a little money there, and I made some money off of “Hello Walls.” Faron Young, who recorded “Hello Walls,” tried to get me to stay in town, in Nashville, and just write songs for him and let him go tour. And, you know, that wasn’t me. I had to get out there and tour myself."

The up-and-coming songwriter and country music singer found common ground on a crossover classic that cemented both artists' reputations.https://t.co/WuTOO8n6tb pic.twitter.com/5niCE7I8Xf

Nelson is also a lover of horses and is taking care of many at his ranch. He shared," I think today I’ve got about seventy-five. I’m around horses a lot, and I’ve learned there is a truth to the old term “havin’ horse sense.” Those old cowboys knew what they were talking about, ’cause horses are smart—they’re smarter than we are. When I get on a horse, it’s just a little step up in the world."