Not many people were happy with Melania Trump's renovation of the White House Rose Garden last year. 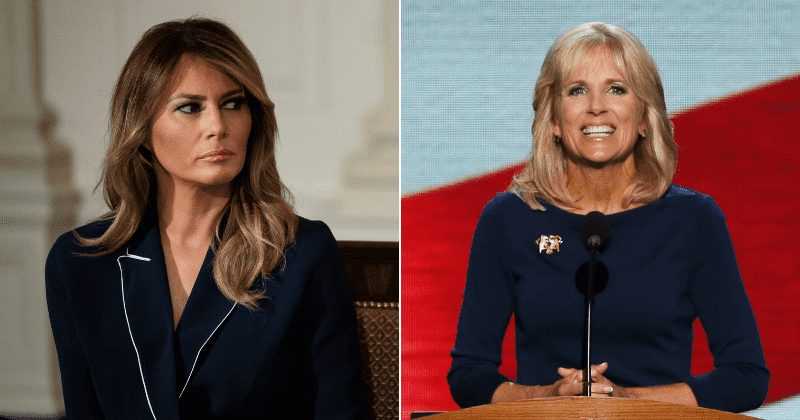 First Lady Dr. Jill Biden recently took to Twitter to share a picture of the famous White House Rose Garden. Presidents often use the space for addresses and press conferences. The FLOTUS tweeted: Spring is here at the @WhiteHouse! sharing a picture of a blooming garden. There seems to be some pop of color this time thanks to the season, however, the design hasn't changed and is the same Rose Garden that former first lady Melania Trump made controversial renovations to.

Restore that garden to what Jackie Kennedy made.

Melania Trump unveiled the renovated White House Rose Garden last year, which was the first time the garden was being restored in 58 years. According to Vogue, her redesign included "electrical upgrades for television appearances, a new walkway, and new flowers and shrubs." In a statement at the time, she said the goal was to "fulfill the dynamic needs of the modern presidency."

Before is on the left. pic.twitter.com/lrxDikzD68

A few Twitter users remarked that space was "beautifully restored" but most felt that that the design was cold and bland. This may be because the garden's original design was vibrant and colorful with an assortment of roses and large crabapple trees. It was commissioned by President John F. Kennedy in 1961 and it was designed by gardener Rachel Lambert Mellon and Kennedy's wife Jacqueline Kennedy. Melania's modern take, according to ABC News, involved a large green grass center and new limestone pathways. The main rose variety is the "JFK rose", a white flower. The garden also includes smaller pink roses, several "peace" roses, and the "Pope John Paul II" rose as a tribute to the first time a pope visited the White House in 1979. For the new design, 10 crabapple trees, planted by Jacqueline Kennedy herself, were chopped down as they were "casting too much shade over the rest of the flowers" according to a pool report.

You ruined it! It's now cold and clinical. Your attempt to one up Jackie Kennedy is an epic fail. Who chops down trees???

Now, more than 70,000 people (at the time of this publication) have signed an online petition calling for US First Lady Jill Biden to restore the Rose Garden at the White House to its "former glory". The petition pointed out that "to honor Jacqueline Kennedy's contributions to the White House and its grounds, her immediate successor, First Lady Lady Bird Johnson, renamed the East Garden as the 'Jacqueline Kennedy Garden' during a ceremony on 22 April 1965. In 2019, Melania Trump had the cherry trees, a gift from Japan, removed as well as the rest of the foliage and replaced with a boring tribute to herself. Jackie's legacy was ripped away from Americans who remembered all that the Kennedy's meant to us. We want Jill Biden and Doug Emhoff to take this on and restore the Rose Garden to Jackie's original design." Although the petition says Melania Trump had "the cherry trees, a gift from Japan" removed, reports have noted that they were, in fact, crab apple trees and were replanted elsewhere in the grounds, according to BBC.

Twitter was also slamming the Rose Garden's more recent design and wanted it to go back to the way it was. mrshellwinger pleaded: Yes! Please restore Jackie Kennedy's Rose Garden - we miss it!. AltonaMonica wrote: Please bring the roses back to the rose garden and add more colorful flowers!! Nature is a blessing and gives hope. Michele s garden back too. Carter’s solar panels. Let’s all make the earth green again! It’ll help with climate change! More trees too! tinabayne added: Beautiful, so much color and life. Please restore the Rose Garden with the Second Gentleman. I was so sad when it was changed to a drab white and lifeless look. To which ChiefTwit1 joked: "...drab white and lifeless look." Also known as the, "Melania."

So Melania killed the trees and the tulips?

So what was Melania Trump thinking? The former First lady was redesigning the area to its original 1962 blueprints, a throwback to the Kennedy era. According to FOX Business, the FLOTUS said in a statement at the time, "The very act of planting a garden involves hard work and hope in the possibility of a bright future. Preserving the history and beauty of the White House and its grounds is a testament to our nation’s commitment to the care of this landscape and our dedication to American ideals, safeguarding them for our children and their children for generations to come." But it looks like not many people have been happy with her take on it.

I'm not worried because Dr. Jill can fix it