This rare possum rescued by a Melbourne veterinary hospital looks exactly like the Pokemon character. 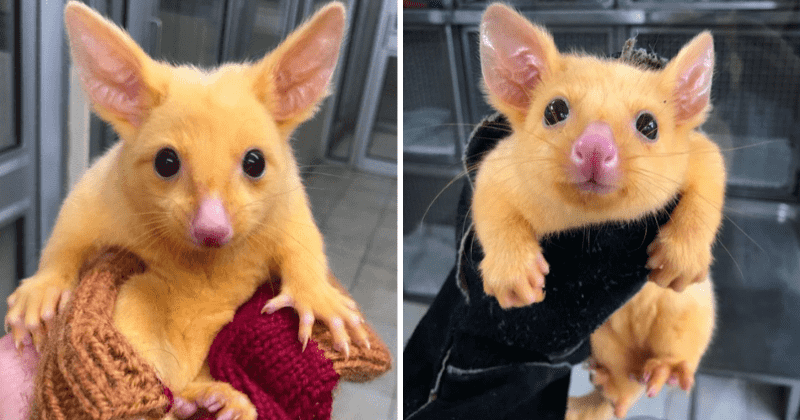 Are you a pokemon fan? Well then, get ready to jet-set into Melbourne, Australia to meet this adorable Possum named Pikachu. According to Daily Mail, a very rare type of possum went viral on the internet with yellow hair, pink snoot, and big pointy ears, a resemblance so uncanny, it's actually named Pikachu. The brushtail possum was reportedly found lying on the side of a road and was later found by a concerned person who picked it up and dropped it off at a local veterinary clinic to be taken care of. According to a source, the marsupial is five months old and is most likely to have fallen off its mother's back.

Boronia Veterinary Clinic and Animal Hospital, which is caring for the animal, took to Facebook and said: "We recently had a very special possum brought in to the clinic. She’s a rare golden variety of the Common Brushtail Possum." According to the clinic, the golden color occurs due to a genetic mutation that causes melanin in their pigment to reduce.

"They are so rare in the wild as although their bright color makes them look special to us, they also stand out to predators! Luckily for this baby brushtail, she’s gone to carers to be raised and then will end up in a wildlife sanctuary so she can live a long happy life." Veterinary doctor Vet Stephen Reinisch said Pikachu would be taken care of by a carer away from the wild as their unusual color will turn them into a target amidst nature.

Speaking to The Age about these creatures, Dr. Kath Handasyde from Melbourne University’s School of Biosciences, said: “One of the issues with unusual colors, particularly if they are pale, is that this is a nocturnal animal and if they are pale, they are obvious to predators like an owl."

Brushtail possums are usually grayish in color and are commonly found in small pockets of Tasmania. They are also found living in the outskirts of Melbourne. Talking about how to take care of Pikachu, Dr. Reinisch said: "If she becomes [a little] more out there and a bit feisty she might be released, but if she stays anxious she will remain in long-term care."

Since posting the pictures, the post has seen over 3.2k likes and over 2.7k shares on Facebook with many chiming in with some interest comments.  Deborah Wilsdon wrote: "So this little cutie is an albino possum. Absolutely the cutest possum I have ever seen but they are all cute except at 2 am when they have their army boots on jumping around on your tin roof." Trish Hart wrote: "Oh she’s beautiful. The wonderful lilac pink of her nose and those dark dark eyes." Taryn Harper spoke about just how amazing the creature looks: "Every possum is precious! But what a little cutie this one is," she said. Shannon Brese spoke about how her daughter would force her to get her a Pikachu, said: "I seriously cannot show this to my daughter or else she will insist we get a real, live Pokémon," adding #pikachulives at the end.

Caroline Dazey of Wildlife Australia reveals that golden possums are seen regularly in parts of Australia. There are "little pockets of them in Victoria and we try to keep their location secret to keep them safe”, she said. While brushtail possums look cute and cuddly, there are ferociously territorial which means they can't be released into the wild at random as they are likely to be confronted by alphas leading to fight-to-the-death scenarios.