43-year-old Damien Anthony Ferguson has been charged with the murder of Officer Dylan Harrison. 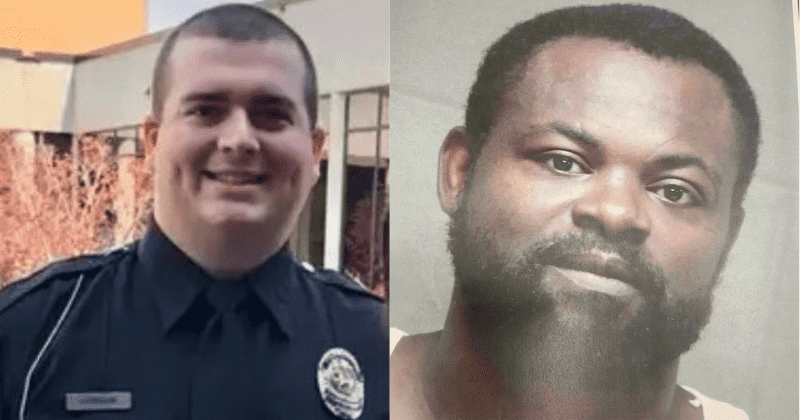 In a tragic turn of events, a Georgia police officer was fatally shot on the first day of duty. Officer Dylan Harrison had arrived at the Alamo Police Department for his first shift with the department on Friday. Then hours later, he was gunned down by 43-year-old Damien Anthony Ferguson right outside the station in the early hours of Saturday at around 1 a.m. The suspect fled the scene right after committing the crime and thus a massive manhunt was launched to locate him. "A blue alert is a public safety alert that is issued when a suspect has killed or seriously injured an officer, and has not been apprehended and maybe a serious threat to the public," explained a Georgia Bureau of Investigation spokesperson Natalie Ammons at the time according to KRON4.

Yesterday, Police Officer Dylan Harrison of the Alamo Police Department made the ultimate sacrifice when he was shot and killed in the line of duty.

We offer our deepest condolences to his family, friends and colleagues.

A $17,500 reward was offered for information leading to the arrest of the culprit who shot the 26-year-old cop in Wheeler County, situated about 90 miles southeast of Macon. Ferguson was ultimately apprehended on Sunday at his home in Alamo by a state SWAT team and a division of the U.S. Marshals Service without incident. Authorities revealed that he was charged with the murder of a police officer and aggravated stalking related to a previous domestic incident. He is now being held at the Laurens County jail. It's unclear if he has an attorney who would speak on his behalf.

Our thoughts and prayers are with the family, friends and colleagues of Alamo Police Department Officer Dylan Harrison. pic.twitter.com/Q2mOIh4ak4

On Saturday afternoon, the Georgia Bureau of Investigation held a press conference where they revealed that it was Officer Harrison's first shift working part-time with the Alamo Police department, according to Fox News. Harrison worked full-time as an Oconee Drug Taskforce Agent in nearby Dodge County since 2018. Before getting into law enforcement, the young officer also jobs with the East Dublin, Georgia police. He was also a firefighter and paramedic, according to CBS News.

#BREAKING: Damien Ferguson, who was wanted in connection to the shooting death of Alamo PD Officer Dylan Harrison has been taken into custody. Great work by officials @LivePDNation. #BackTheBlue pic.twitter.com/0uh1ctVQ5M

Following Ferguson's arrest, authorities revealed that the suspect ambushed Harrison in retaliation to an associate's arrest made by the officer hours before the shooting. Apparently, the late police officer had approached a driver on Friday afternoon after noticing a traffic violation. The driver was in the parking lot of the Circle K convenience store which is situated across from the police department. When Harrison asked him to identify himself, the driver refused to comply and the interaction escalated quickly when he pushed Harrison.

My prayers are with the family & loved ones of 26-year-old Officer Dylan Harrison, who was ambushed & killed in a shooting early Saturday on his first day working with the Alamo Police Dept. in GA. He leaves behind his wife & 6-month-old son.https://t.co/M64XKpj3KS

Thus, Harrison used his Taser on the man, arrested him, and took him to jail. "It is believed that the ambush-style attack on Officer Harrison was retaliation for the incident and arrest of the man," revealed the bureau in a statement without identifying the driver who was apprehended. The senseless death of Harrison has left the community shocked as Alamo Police Chief Karen Zanders expressed, "I have never experienced a grief that I have felt since Officer Dylan Harrison's life was taken in our small, quiet town." She added, "His life was taken from him for simply doing his job."

Even Georgia Governor Brian Kemp expressed his sympathy for the officer's family as he posted a moving message on social media. "Early this morning, one of our law enforcement officials in Middle Georgia was killed in the line of duty," wrote Kemp on Twitter. "Our thoughts and prayers are with this officer’s family, friends, and colleagues at the Alamo Police Department. May God continue to be with all who protect and serve." Harrison was the first Alamo officer who was killed in the line of duty. He is survived by his wife and their 6-month-old son.

Horrific - Officer Dylan Harrison age 26, was working his first shift as an officer with the Alamo Police Department, Georgia when he was gunned down outside the police station about 1 a.m. He is survived by his wife and their 6-month-old son. Pray for his family and friends. pic.twitter.com/UiibYTnobL