The Kennewick Police Department has also stated they don't believe that these women are real nurses. 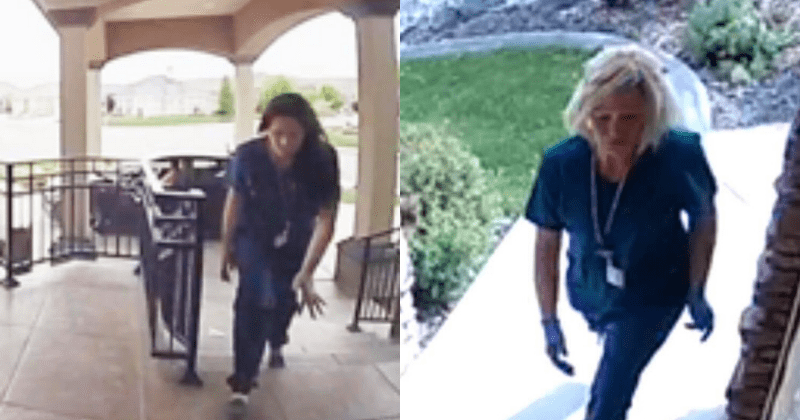 Healthcare first responders and essential workers are the real heroes of the pandemic. Most of the public has taken to giving them full credit as they battle on the frontlines with increasing cases being brought to them each day. Essential workers too deserve equal praise as they ensure that food, water, electricity, and other requirements for a normal living continue to function without hassle. Amidst such a pandemic, there is always mischief in store. The Kennewick Police Department has stated that two women dressed as health care workers are taking packages from outside residents' homes in Washington State.

In a noteworthy sighting, two women described by police as suspects in a porch piracy case were witnessed in surveillance videos wearing scrubs and what appeared to be a lanyard with an identification badge. One of the women wore gloves as she just took a package off the front porch of a home. The Kennewick Police Department has also stated they don't believe that these women are real nurses, CNN reported.

“The nurses we are fortunate to know only give their time, lives, and take the vitals of their patients (not their property),” police posted on Facebook. One of the packages which were stolen on Wednesday was in fact taken from the home of an actual nurse and a law enforcement officer. “We have a home security system so I pulled up the videos,” Michelle Santiago, who was out working at the time of delivery, told CNN. “I could see the FedEx driver drop the package off around 3 o’clock that afternoon in one video and in (a following) video this woman walks up and takes it less than 5 minutes later,” said Santiago.

Detectives do not believe the women in the photos are actual nurses.https://t.co/4AtaotwYak

Inside the package was a customized organizer for her husband’s police equipment. Santiago shared the video with her neighborhood group and found other instances of this happening. “Even if we had been home I don’t know if I would’ve gotten out there fast enough to get the package,” said Santiago. “She literally grabbed the package minutes after it was dropped.” Police shared the images on Saturday hoping the community can help identify the suspects.

Women dressed as nurses amid coronavirus pandemic are stealing packages off porches in Washington... https://t.co/0Xey4kvJrs via @YahooNews

Another Kennewick Police Department spokesperson spoke to USA Today on Sunday stating that they had multiple potential suspects. These suspects have been identified as of now but no arrests have been made so far. "It's a little bit trickier when you have different names coming in and pictures of people [that] don't match," said Sgt. Todd Dronen. The police department also added that they are currently investigating this case of porch piracy and have urged the public to help them out. They then shared the images of the suspects on their Facebook page and urged those who are aware of their identities to call nonemergency dispatch at 509 628-0333 and provide KPD Case 20-16877. The department clarified that they appear to dress as nurses but firmly believed they were not actual nurses.

In related news, there was one other case in Washington state which gained national media attention last year. Two women were caught on a doorbell camera as they stole packages from the porch. The women then returned them after learning that one of them contained a gift meant for an autistic boy with a brain tumor. Sergio Moreira, a refurbisher and memorabilia customizer for his company, Macra Productions, spoke to local TV stations after the theft saying that one of the packages had a replica WWE championship belt for a 5-year-old Delaware boy named Timothy "Timmy" Vick Jr.  The two women later returned to Moreira's house and tearfully apologized. "When I saw their faces, they were crying and they came and put the tote down, my guard went down and I realized what was happening," Moreira told the outlet at the time.