trending celebrity people lifestyle news animals
'Are You There God? It's Me, Margaret' By Judy Blume Is Going To Be A Movie

'Are You There God? It's Me, Margaret' By Judy Blume Is Going To Be A Movie 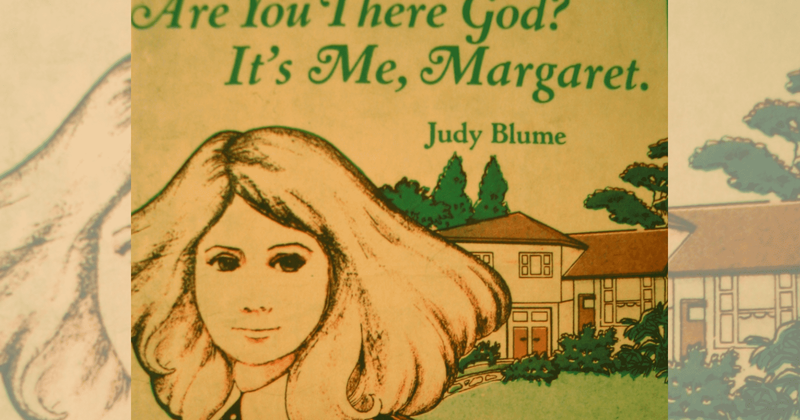 If Judy Blume was one of your favorite authors as a kid, here's some big news. Her iconic '70s book Are You There God? It’s Me, Margaret is being turned into a movie! One of the author's most popular works, the book chronicles the story of Margaret Simon, a sixth-grader who has a lot of questions and looks to the universe for answers to the many questions that adolescence presents. It was a book that many girls could relate to and it helped them understand puberty better. From Margaret's first bra, her first period, to boys, the issues talked about in the book was something many young girls could relate to. Keep in mind the book came out 50 years ago!

The 83-year-old writer had resisted turning her hit book into a film for almost 50 years. However, she eventually signed over the rights to producer James L. Brooks' production company Gracie Films and Kelly Fremon Craig in 2018. "I'm a gut-feeling kind of person, and I fell in love with them both," Blume explained to EW. "This is a team who cares about the book and understands it — I thought, let's do this while I'm still around to enjoy it."

It’s really happening! Exciting to see the cast come together. Off to a great start with Abby and Rachel. https://t.co/2WaJJoWwer

Abby Ryder Fortson will take on the role of Margaret Simon and her mum Barbara Simon will be played by Rachel McAdams. "My readers are always fantasy-casting my books, but I've never done that," said Blume. "But you know it when you see it, and Abby is a natural. And I'm so excited that Margaret got a funny, sexy, sassy mom in Rachel." Young Abby picked up a copy of the book for the first time as she was preparing to audition for the role of Margaret. "I loved how it speaks not only to girls but to everyone, all around the world, because we all go through changes growing up," Fortson said. "This book is important because some girls don't get the chance to talk to anyone about their body and what happens to them when it changes, and this book tells them it's going to be okay, you're normal, it just matters who you are inside." The 12-year-old is best known for her role as Paul Rudd's daughter in the Ant-Man franchise. Abby has also starred in the HBO series Togetherness. As for her next role as Margaret, she said, "I love her. She's so goofy and awesome. She's all heart and love and just wants to have friends and figure out who she is."

Are You There, God? It’s a Judy Blume movie with Rachel McAdams and Abby Ryder Fortson https://t.co/0F2TwffLGq pic.twitter.com/uQrgu6MIGN

Rachel McAdams is popular for her roles in movies like Mean Girls, as well as the film adaptation of the Nicholas Sparks novel, The Notebook. The actress is notoriously private about her personal life; she is mom to her 2-year-old son, whom she shares with boyfriend Jamie Linden. "He's so entertaining," the 42-year-old said of her son in a rare interview, according to TODAY. "I thought, 'Would I rather be alone in quarantine or with my family?' There are days, sure, but I would be so bored without him around to make it so fun. We live in the country, so there's a little farm down the road," she said. "We can go and look at the animals." Perhaps she'll tap into her mom instincts and let it play on screen for her upcoming role. As for the film, is Judy Blume worried about how her character will look like as part of someone else's artistic vision after half a century? "It will be fine," she said, "because the book is the book — and it always will be the book."