Did you know the colorless rainbow is called a fogbow? 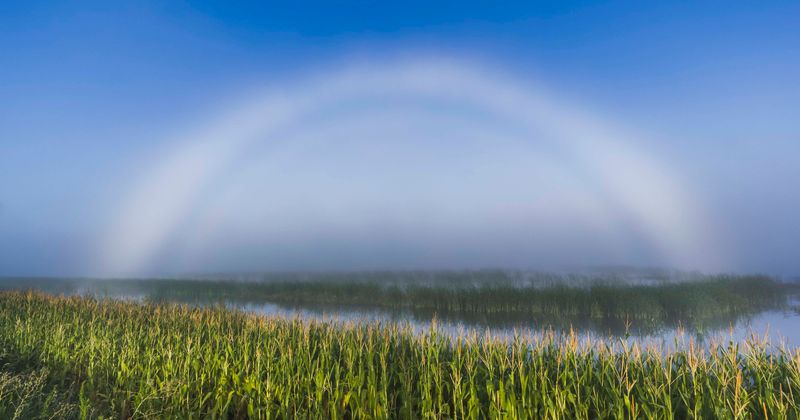 While we love our rainbows bright and colorful, there's something quite mesmerizing about a white one, right? In 2016, Melvin Nicholson, a British photographer was out working on the Rannoch Moor, south of Glencoe in Western Scotland when he spotted something he described to be "magical".  Nicholson told ABC News, "I had been out in the morning with a friend who said he knew of this beautiful tree, the one in the center of the photograph I took." When they made it to the tree, he said, he noticed the area was "incredibly misty."

"Then the sun started to rise behind us, burning off the mist, and at that point, the fogbow appeared," the then-44-year-old said. "I had never seen anything like it in my 10 years capturing landscape photos around the globe or even in my 44 years of life." But the magical moment was short-lived as the colorless rainbow disappeared in 5 minutes, but to the photographer, that just made the moment even more incredible. "I knew I had captured something fairly special when I realized how transient it was," he said.

I never knew this existed. Wow!

The photographer shared the beautiful photograph on his Facebook page, writing: I ventured up to Rannoch Moor mid-November 2016 to photograph this lovely lonely tree in the mist when all of a sudden this unbelievable fogbow appeared. It is a colourless rainbow that is made up of tiny water droplets that is caused by fog. It's an amazing thing to witness and can generally only be seen if the sun is behind you when you are looking at it. As soon as I saw this wonderful isolated windswept tree, I knew that it had to be framed by the fogbow. Freshly fallen snow set the scene all around. It was just beyond magical and one of those days that I'll remember forever. Online users were in awe of the photo. Dusty Defjam wrote: Beautiful shot, I was lucky enough to snag a fog bow in Iceland recently. Although the sky was pretty blue and clear thus the fog bow was weaker. This still blows mine out of the water though, well done. Matt Armstrong said: i remember seeing these occasionaly as a young lad almost 50 yrs ago when i lived in thurso..we called them ghost rainbows.

A beauty of a ghost bow (cloud bow or white rainbow) graced the sky for a while today. pic.twitter.com/IUTgMwFJMg

So what really is this rare phenomenon? The white rainbow is technically called a "fogbow". According to the BBC, the rare sight is also called a white rainbow, cloud bow, or a ghost of a rainbow. As recently as September of this year itself, the misty sight was yet again spotted in Scotland. The BBC notes that  "unlike a classical rainbow which is created when sunlight interacts with raindrops, a fogbow forms when sunlight interacts with much smaller water droplets found in fog, mist, or cloud." Nicholson told BBC that what he captured was "a colorless rainbow that is made up of tiny water droplets that cause fog.  It's an amazing thing to witness and can generally only be seen if the sun is behind you when you are looking at it." He said an isolated windswept tree, framed by the fog bow, completed the shot, "It was just beyond magical and one of those days that you'll remember for a long time to come," he added. Another fogbow was captured in Cairn Lochan, Moray, Scotland, by a climber named Andy Luke, which he called "quite amazing.”

According to NASA, the fogbow's "relative lack of colors" is caused by "relatively smaller water drops" than those of colored rainbows. The National Weather Service states that a fogbow is "a rainbow that has a white band that appears in fog, and is fringed with red on the outside and blue on the inside." “Due to the small size of the droplets, the light waves don’t spend enough time within the droplet to refract enough to separate cleanly and focus into colors,” US National Weather Services meteorologist Brian Jackson explained.  So when's the best time to spot this incredible beauty from Mother Nature? According to The Weather Channel, the best condition for spotting a fog bow is on a slightly foggy day (that seemed obvious). But also, note that there's bright sunshine on your back. It's most likely to occur around areas that will gather humidity, like a field, a mountain valley, at a coast, or on a lakeshore.