The Baltimore eatery has reportedly been in the news for similar acts of racism against nonwhite customers. 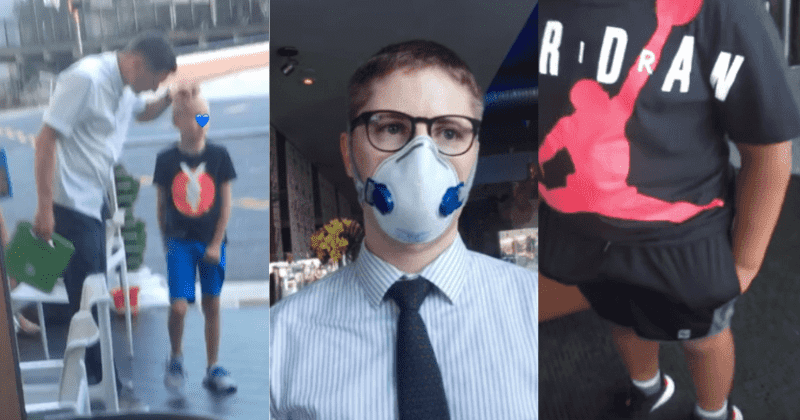 A restaurant chain in Baltimore known for enforcing dress codes targeting nonwhite customers has landed in hot water after a video emerged of a white manager refusing to let a woman and her son enter because the boy "violated" their ban on athletic wear.  The footage, shared by Rex Chapman and from the Ouzo Bay in Baltimore's Harbor East, drew accusations of racism on social media especially after the mother, Marcia Grant, pointed out a similarly dressed white boy who was served, reports Washington Post. Atlas Restaurant Group, which owns Ouzo Bay and over a dozen other eateries in and around the city, first said the manager seen in the video has been placed on indefinite leave after the company was "sickened" by the incident. In a follow-up statement the group released on social media, it said an internal investigation was conducted and that the two managers were "no longer with the organization."

so infuriating. every black person i know has had an experience like this. and as you can see from some of the comments on this thread the gaslighting denial makes you even angrier. “it’s all in your head” “stop playing the race card”. damn it. just let me live! pic.twitter.com/tPC1jcCcA8

In a statement posted on Twitter, the company named the woman who was denied service and said: "We sincerely apologize to Marcia Grant, her son, and everyone impacted by this painful incident. This difficult situation does not represent who or what Atlas Restaurant Group stands for." Appearing to do damage control, the statement read: "While dress codes across Atlas properties are the result of ongoing input from customers, in no way are they intended to be discriminatory. That said, this past weekend's incident at Ouzo Bay clearly serves as a moment we will learn from and create change." The establishment further announced a change to their dress code policy stating it will no longer place a dress code for children younger than 12 years of age if they are accompanied by a parent.

Today, we learned of an incredibly disturbing incident that occurred at one of our restaurants in Baltimore, Ouzo Bay. We sincerely apologize to Marcia Grant, her son & everyone impacted by this painful incident. This situation does not represent who or what Atlas stands for. pic.twitter.com/jsofGRLVw1

The video shows the manager taking an issue with the little boy’s outfit as he is seen wearing an Air Jordan T-shirt, athletic shorts, and tennis shoes, pointing to the shorts at one point saying it could be a problem. As the standoff continues, the mother pans her camera to an outdoor area of the restaurant where another boy who appears to be wearing a similar outfit."You’re telling me there’s no athletic wear?" the mother can be heard asking. "The little boy out there had on tennis shoes and an athletic shirt. So why does he get to wear athletic wear and my son can’t?" before saying, "I just want to understand why it’s different for my son."  When the manager chimed in saying with a half-baked reply: "I understand how you feel--" Grant interjects with, "I don’t want you to sympathize with me, I just want you to tell me why it’s different for my son," in a patient tone. The manager didn't appear to have a conclusive answer and instead shrugged and stuttered as a response.

Dress codes only apply to some of us — apparently.

This is ridiculously heartbreaking... pic.twitter.com/93fhnNPPe3

The mom further shared a post on Facebook and Instagram as well and posted the video with the following message. "I have faced racism time and time again," she wrote. "But it’s hard **** when you have to see your child (9yo) upset because he knows he’s being treated different than a white child!!!" The video which has received more than nine million views so far had plenty of people condemning the restaurant's action after what appeared to be blatant racism on the manager's part. Audrey wrote: "His ability to never answer and yet to never back down from what he clearly could see was a double standard speaks to the incredible ARROGANCE that is part and parcel of RACISM. So infuriating. A wolf in sheep’s clothing that guy." Christopher Keelty pointed out that Maryland has a specific law against racism in restaurants and wrote:  "This video seems like pretty compelling evidence to me. Shut this place down."

The name of this place is Ouzo Bay in Baltimore MD. This manager has no excuse.The inequality was in his face and he still couldn’t admit his bias. Atlas Restaurants Groups apologized but more diversity training is not the answer. Better staff choices is https://t.co/N8m5mQRBBQ

The dress code policy isn’t the problem. The problem is not enforcing it the same way to every single person that enters the establishment regardless of who they are.