The veteran returned to Omaha beach in 2013, the site of one of the bloodiest skirmishes in human history. At the same spot he landed back on June 6, 1944, he prayed for fallen soldiers. 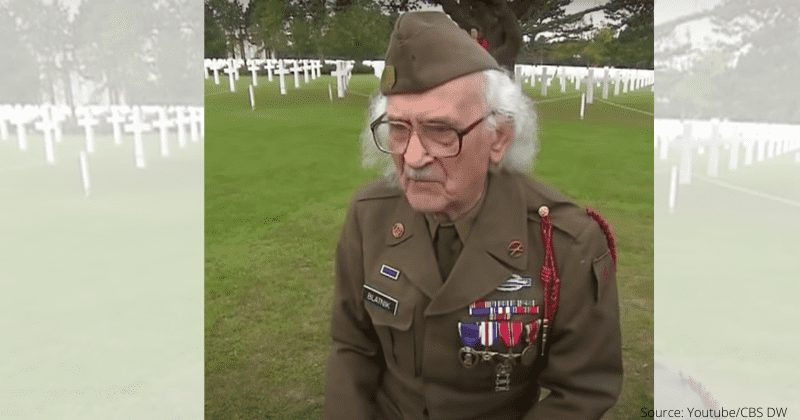 Robert Blatnik, the US Army veteran who landed on Omaha Beach on D-Day with 900 men under his command, died on Saturday. He was 100, reports Fox News.  Doug Dunbar of CBS 11 tweeted a tribute to the veteran and shared pictures of him returning to Normandy from 2013 and wrote: "Sad to share the passing of an American #hero of the ⁦@FightingFirst⁩ #veteran, and friend. 2 trips w this #dday hero to Normandy, to share his story and we still couldn’t get enough. Tonight I raise a glass, to you Sgt Major Robert Blatnik."

Sad to share the passing of an American #hero of the ⁦@FightingFirst⁩ #veteran, and friend. 2 trips w this #dday hero to Normandy, to share his story and we still couldn’t get enough. Tonight I raise a glass, to you Sgt Major Robert Blatnik. #RIP ⁦@USArmy⁩ #Salute pic.twitter.com/kquVKJngi9

In the pictures, the then 93-year-old can be seen stopping at the very same spot he landed back on June 6, 1944. He is seen on his knees and appeared to have said: "Oh dear Father thank you for having saved my life." He also offered prayers for the men that lost their lives in what was one of the bloodiest skirmishes in human history, which took the lives of 500 of his own men. Describing the scene in 2009 in an article on the US Army website, Blatnik wrote: "On the beach, the artillery and smoke were everywhere. It was chaos all around us. I didn't even see any small arms fire from the Germans, just bodies and bombs going off everywhere." The veteran had served under General George S Patton in the 1st Infantry Division, called the Big Red One. According to him, his experience in combat helped him stay alive on that fateful day.

I took this photo of Sgt Major Robert Blatnik 5 years ago. This was the stretch of Omaha beach in Normandy where he came ashore on #DDay. He commanded 901 men. Head count 24 hours later and about 500 yards inland, they had 387. 500 yards. Let that soak in. #neverforget pic.twitter.com/bYYWw30ZTU

"I knew that the main thing to do was to get off the beach," he said. "Some of the men wanted to dig in. When you're on a beach the main thing to do is confront the enemy. You can't dig in during something like that; you've got to get the hell off the beach. If you try to dig in you're lost, so I tried to keep my men moving forward." Twitterati offered their condolences to the Blatnik family and thanked him for the service. Rob Hutchinson wrote: "Condolences to family and friends of a true American Hero. Grant unto him eternal rest Gracious Heavenly Father. May the Angels rise up to greet him: Well done thou good and faithful servant ENTER now unto thy rest." Jan Perry-Rhys added: "God Bless you, Sgt Blatnik. Thank you for your service and our freedom." Jana Lutz wrote: "God speed Sir, now you can rest easy."

People on Facebook were also overcome by emotion at the news of the veteran's passing and added messages in solidarity with the family. Reta Harris wrote: "He lived almost his whole life with the memories of this one day....that in itself made him a Hero. Thank You for your service to our Nation. God Bless his family and friends. RIP SIR." Michael Spock wrote: "Sir. We thank you for your service to this Great Nation. The United States of America. Thanks to brave men like yourself our country is free and safe. May you Rest in Peace in Heaven along with all the brave men and women who sacrificed their lives to gives us the freedom for which you fought for us to have and to keep. My condolences to your families and friends." Caitlyn Cruz opined: "What a life he has lived. And I'm sure he's left a wonderful legacy to his family and friends. Being 100-years-old, is an honor I'm sure. He's been a blessing to a lot of people for 100 years. RIP sir! You deserve it!"