When he was alive, this was a cause closest to his heart. He bade the panel to stop people from "falling" into homelessness and to "pick" them up. 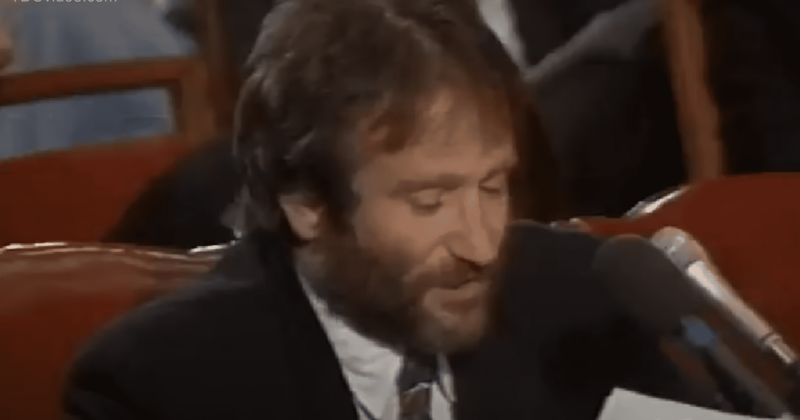 It's been seven years since actor Robin Williams passed away, but his legacy lives on through his good work. And we're not just talking about his impact on cinema and comedy which was immense in itself. But the work he did to improve the lives of others. More than anything else, Williams spoke about and worked for the cause of the homeless. Williams was part of a progressive group of comedians who worked for the non-profit, Comic Relief USA for this cause since the 1980s and helped collect a staggering $80 million. But one can see Williams in his true element combining his conviction and comedic genius in a 1990 clip where he speaks for the homeless before a Senate panel. Years on, the address about preventing them "from falling" still holds relevance and might bring a tear or two to those who witness it.

During the height of America's homelessness crisis in the 90's — Robin Williams asked if he could testify before the Senate.

Whoopi Goldberg was by his side.

It's the most powerful two minutes you'll see today... pic.twitter.com/y1yiTRQUfd

The clip seems to have resurfaced on the internet winning the appreciation of Williams' numerous fans. Trying to get the political class to rally around any cause is difficult but Williams sure knew how to get the point across with his characteristic humor. "What we've been doing for the last four years is basically putting a band-aid on a very gaping wound. But this is, this program has incredible possibilities to deal with basically keeping people in their homes. The problem cannot be denied anymore, we cannot be a kinder, blinder nation," Williams told the Senate Labor and Human Resources Committee, reports Newsweek. Williams supported the Homelessness Prevention and Community Revitalization Act that was being discussed then. It was meant to increase funding for housing-based support centers for the homeless.

Another aspect was its emphasis on mental health services for the homeless population. Williams seems extremely optimistic and this just seems to radiate throughout the entire video. "I do believe this can work in an incredible way, from a grassroots level, that the money can get to that and prevent, truly prevent, homelessness, that's where it lies. You can't keep picking people up, you have to stop them from falling. That's what I hope, thank you. I thank all of you in a bipartisan way," Williams said. At a certain point in his speech, Williams tried to bring the panel back to reality through his perfect comic timing. "I know it's a little scary having a comic in front of you, it's kind of like having a porcupine in a hemophilic ward. I present just my simple soul and hope you do continue this in a bipartisan way," Willaims said leaving the others in splits.

Robin Williams was such a beautiful person and he is very missed by my family. I sincerely hope his family are coping as well as they can without him and know that he touched people he never met

He further drew from his own experiences while living in San Francisco. Calling it "Death Valley" because of the number of homeless people. While there were programs for their betterment but it was not reaching them, he said. He spoke of the reality of people, families of 5 members who were living out of their own vehicle. Pretty soon they were on the streets. While the problem was immense and the way to improvement was also long and hard Williams said as a performer comedy was the only "weapon" he had to try and make a change in people's lives. Some time ago, a story of William's empathy for the homeless population was summed up through an experience of a fan who contacted his office to try and book him for an event.

For most films he made, Robin Williams requested that the producers employ a certain number of local homeless people as extras and treat the well. pic.twitter.com/ffv7t2g9Rf

The fan named Brian Lord wrote about an experience involving the actor that left him touched. The actor apparently had a clause where anyone who wanted to hire his services needed to employ homeless people first.