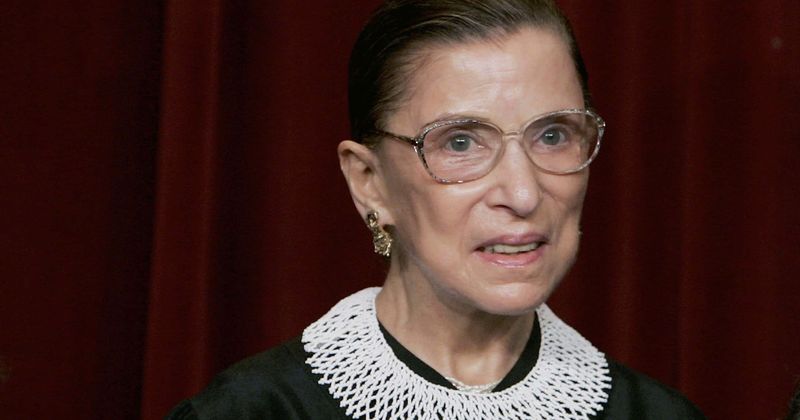 Ruth Bader Ginsburg has left behind a legacy. The second woman appointed to the Supreme Court fought hard throughout her life for women’s rights and social justice. Ginsburg died last year at her home in Washington, D.C., due to complications of metastatic cancer. The icon was 87 years old when she died on September 18th, 2020.  "Our Nation has lost a jurist of historic stature. We at the Supreme Court have lost a cherished colleague," Chief Justice John G. Roberts said in a statement at the time, according to PEOPLE. "Today we mourn, but with confidence that future generations will remember Ruth Bader Ginsburg as we knew her -- a tireless and resolute champion of justice." The late justice is survived by her two children, Jane Carol Ginsburg and James Steven Ginsburg, along with four grandchildren, two step-grandchildren, and one great-grandchild. Ginsburg's husband, Martin David Ginsburg, died in 2010 from complications of metastatic cancer.

Reflecting on the former judge's generosity, it seems she has left everything she owns to her children and her housekeeper. TMZ reported having obtained a copy of the late Supreme Court Justice's will, which stated how her $6 million estate would be split. Ginsburg left the majority of her personal effects to her children, Jane and James Ginsburg, whom she also made executors of her will. Her property includes (but is not limited to) cars, furniture, books, art, sculptures, paintings, photographs, silver, porcelain, jewelry, and clothes. The collection is valued at $250,000. She has other personal property that's worth about $5.5 million but there are no details about that mentioned. Elizabeth Salas, her housekeeper, was the third person mentioned in the will and received approximately $40,000 in cash. Salas reportedly worked for RBG for 22 years.

Of course she did! She was a treasure of a human being! Oh, #RBG, we miss you and we NEED you.

Ruth Bader Ginsburg has won many admirers for her work in fighting for equal rights. She may have been soft-spoken but she was strong when it came to expressing dissent against injustices. The time she spoke out against the conservative court’s 2013 decision to remove voting rights protections sparked her ascent to pop-star status. She earned her the nickname “Notorious R.B.G.” (a riff on the late rapper Notorious B.I.G.) as well as viral memes and even infant Halloween costumes. “I am 84 years old and everyone wants to take a picture with me,” she said in 2018’s documentary of her life, RBG. In the film which released in 2018, feminist Gloria Steinem called Ginsburg: “The closest thing to a superhero I know.”

Directed by Betsy West and Julie Cohen, the documentary takes a look back at Ginsburg’s life. It begins with her childhood and then delves deeper into her days as a student at Harvard and Columbia’s law schools. At the time she was one of just a few women enrolled in a class of hundreds. The documentary also looks at  the early days of her legal career, her appointment to the Supreme Court, and how she later turned into a feminist and internet icon, the “Notorious RBG.”

According to her biography on the Supreme Court website, "In 1971, she co-founded the Women’s Rights Project of the American Civil Liberties Union, and served as the ACLU’s General Counsel from 1973–1980, and on the National Board of Directors from 1974–1980. She served on the Board and Executive Committee of the American Bar Foundation from 1979-1989, on the Board of Editors of the American Bar Association Journal from 1972-1978, and on the Council of the American Law Institute from 1978-1993. She was appointed a Judge of the United States Court of Appeals for the District of Columbia Circuit in 1980. President Clinton nominated her as an Associate Justice of the Supreme Court, and she took her seat August 10, 1993." While she was well known for her efforts in her professional life during a 2018 talk at Columbia University’s Law School, Ginsburg spoke of what she loved most in life. “The tremendous luck I have had, I am a very lucky woman, starting with my dear spouse and my family, two children of whom I am very proud,” she said. “I love beautiful music, I love the work I do. I think I have the best job in the world for a lawyer.”