Jerry Martin went out of his way to mow the tall and overgrown grass on one of the bus stops on his route in Copperas Cove, Texas. 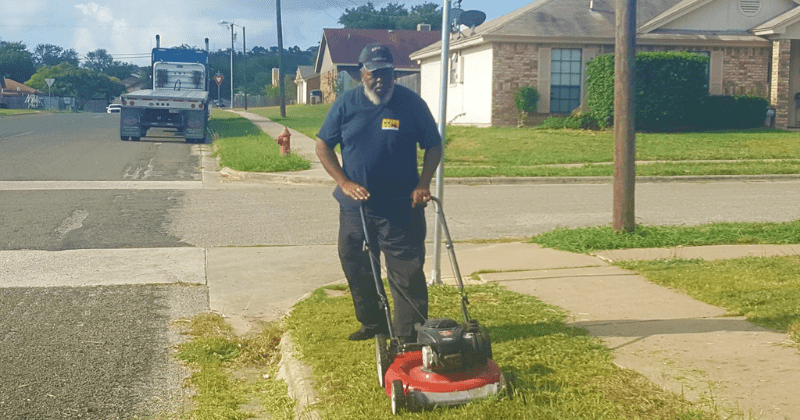 Jerry Martin is a bus driver by profession and for a group of pint-sized passengers who ride with him every day he's a little more than that too - a caring guardian. “He takes care of the children like they are his,” Linda Heckler-Gibson told TODAY Parents. Recently the Copperas Cove, Texas, resident made the news for a genuine act of kindness people across the internet can't stop lauding—he went out of his way to mow the tall and overgrown grass on one of the bus stops on his route.

School bus driver, Jerry Martin, noticed the grass was getting tall at one of his bus stops and he didn't want his students to be stuck standing in the weeds. Martin went out and mowed the grass at the bus stop to help his students.https://t.co/ta5ViKnvod

He did it because his students wouldn't have to wait amongst the weeds when he went around to pick them up. Despite being an 18-year veteran bus driver for the region's school district, he's never received the acclaim like now. The school administration also decided to laud Martin on their Facebook page and said the yard he mowed had been uninhabited for several years and was becoming a nuisance for the children who had to wait there every day. "PICTURE OF THE WEEK!" wrote the district. “Bus driver Jerry Martin cut the grass at one of his bus stops so the students don’t have to stand in the weeds while waiting for the bus. The home is vacant and the yard is not being maintained. Three cheers for Mr. Martin!”

The post caught on pretty soon with as many as 2,500 people liking and sharing the story while some even added messages of gratitude for Martin's efforts. "What a special gentleman. Another “Angel Among Us!", Nelda Klein wrote. "Go, Jerry! Miss seeing you around VFW function. We say hi from Karen and Don!", wrote Karen Kaylor. Casey Griffeth, who seemed to know and ran up to him several times, wrote: "Not too surprised to see he’s doing amazing things! He’s an awesome person! Who remembers when he used to DJ at the school when we were kids?! Thank you Mr. Martin!!" Heather Gutierrez added: "Wow! That is truly amazing!! My heart is full knowing our kiddos felt that love."

Congratulations to CCISD bus driver, Jerry Martin, who was honored by Keep Copperas Cove Beautiful at the Copperas Cove City Council workshop Tuesday evening for his work to beautify the community by mowing his bus stops. He received a coin from Mayor Bradi Diaz. #CoveCulture pic.twitter.com/8GxCDpGZM1

Rick Gainer, another person from the community showered his praise on Martin. "Uncle J, you have always been a positive role model for us. A lot of good things that you have done, have never been publicly recognized. But you have never wavered. My hat off to you unc. All the way from Georgia, love you uncle Jerry Martin Sr." School bus drivers are often the best people out there as they spend most of their lives around children and tend to care for them as if they are their own. In another story, a bus driver saw a kindergartener board her bus for his first day of school and realized he wasn't at all having fun. So, she did the best thing possible - held his hand and comforted him throughout the journey.

THANK YOU, JERRY! Texas school bus driver Jerry Martin noticed the grass at one of his bus stops was growing a little high. And, he didn't want his students to be stuck standing in the weeds while waiting for the bus. https://t.co/kcn4mDX6it

The boy named Johnson seemed excited initially but was in tears by the time he boarded the bus. The little boy held onto his mom as tightly as he could before getting on. "He was super excited to go, but when the bus came around the corner he was really quiet," his mom Amy Johnson told CNN. "The bus opened the door and I looked at him and he started crying." That's when Isabelle Lane stepped in. "I stuck my hand behind the seat as maybe something else to grab onto and he grabbed my hand, "Lane recalled. The boy's mother took a photo and it quickly went viral around the community with The Augusta Police Department even sharing the same on Facebook with a heartfelt caption. "In our 2nd “official” year in the school, we really need to shout out our school staff. This is one of our wonderful bus drivers, Miss Lane, holding the hand of a scared little one on his first day of school! The compassion we see every day in our teachers, bus drivers, custodians, administration, food service staff, and paraprofessionals is truly admirable. We are so fortunate to be able to partner with these people!"