I'm just trying to make people smile, that's all," Shaq said after the video of his generosity went viral. 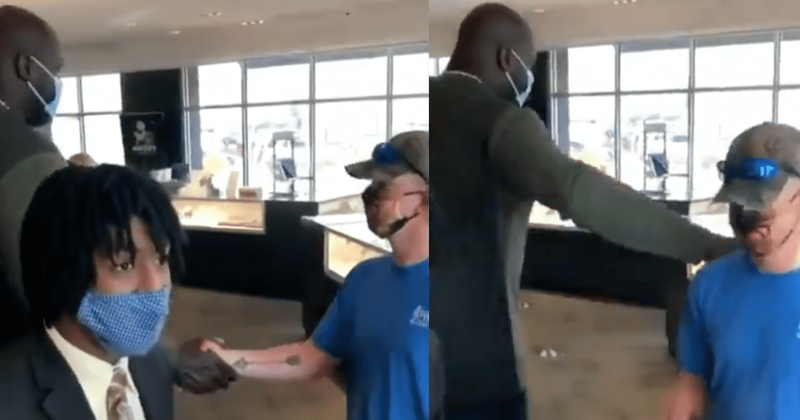 Shaquille O'Neal may have been inducted into the NBA Hall of Fame but now it's time to induct him into the hall of fame for making people's day. A video of Shaq paying for a young man's engagement ring has gone viral. The basketball legend was at a Zales store, where he also happens to have his own jewelry collection. He saw a customer walk in and enquire about the amount left to pay off for the ring he had purchased. Shaq who had overheard this conversation decided to step in and generously pay off the guy's debt for him.

The former NBA player turned sports analyst discussed this touching moment on an episode of NBA on TNT. "So I was in Zales looking for some hoop earrings," he told the panel on the show. "I seen the guy come in, he was just so shy, he was saying, 'Hey, how much do I owe to pay off my ring?'" He continued, "I was like, 'My man, how much is the ring?' I'm not going to say the amount, but it's not a lot for me. I was like, 'You know what? Tell your girlfriend I got her.'" And just like that, he had taken care of it. In the video, he can be seen confirming the payment with the sales associate as he hands him his credit card and shaking the hands of the man he had just helped.

The young man was initially reluctant to accept Shaq's generous offer. But he insisted and said that he does it all the time. He convinced the young man and said, "Don't worry about it." The former Lakers player recognized that the young man was a hard worker and decided to help him out. Referring to the video he said, "I didn't mean for that to get out because I don't do it for that." He added, "I'm just trying to make people smile, that's all." It is well known that Shaq has a big heart and his generosity knows no bounds.

"I'm just trying to make people smile... That's all."@SHAQ helped a young man out at a local jewelry store by paying for his engagement ring. pic.twitter.com/eK8n0YHGb7

On the show, he went on to say, "This is something that I do every day. The other day, me and my mom went furniture shopping and this lady, she had an autistic daughter and she was also looking to pay for some furniture. I just took care of it. I'm into making people happy. Whenever I leave the house, I just try to do a good deed." There are many such instances when his kindhearted nature allowed him to help those in need. With a heart as big as his presence on-court, in 2019 he gifted an accessible home to the family of a boy who was paralyzed from the chest down after a stray bullet hit him, reported PEOPLE. “No mother should have to go [through] that,” Shaq had commented about the incident.

When an 11-year-old boy was killed in a car crash in Louisiana Shaq wanted to know how he could help. He reached out to the family and paid for the money they were trying to raise through a GoFundMe, reported Sports Casting. Louisville football signee Dexter Rentz Jr. was shot and killed in Orlando. Shaq stepped in to pay for his funeral.  “He was on his way, he really was,” he said of Rentz. “I don’t know what it feels like to lose a son, but I know what it feels like to lose someone. This one hurts my heart. It really does. I wish things like this would never go on. It’s just so sad, and I want to be able to help his family. I wanted to take care of it.”