Siegfried Fischbacher Of 'Siegfried And Roy' Dies At 81

Fischbacher reportedly died "peacefully and gently" in his sleep on Wednesday at his home in Las Vegas. 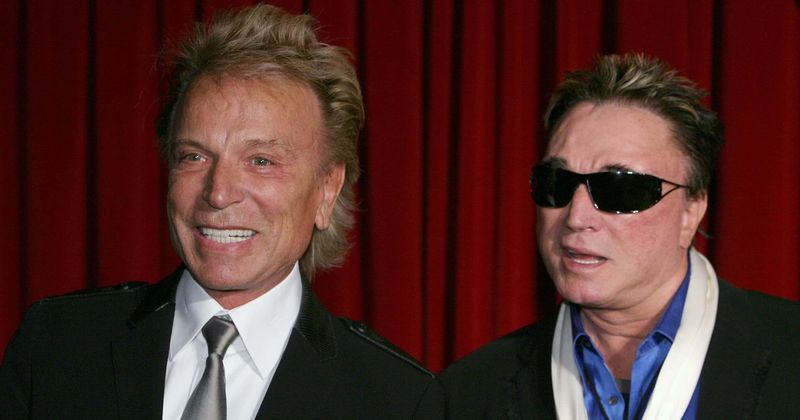 World-renowned magician and tiger-handler Siegfried Fischbacher has died from pancreatic cancer at the age of 81. According to Newsweek, the late celebrity's sister Dolore—who lives as a nun in the Bavarian capital of Munich—confirmed his death to German newspaper Bild. Fischbacher reportedly died "peacefully and gently" in his sleep Wednesday at his home in Las Vegas. The celeb's cancer diagnosis was reported just days before his death. Although a malignant tumor was removed from the magician in a 12-hour operation, it was found to have already spread to other parts of his body.

The passing of Siegfried Fischbacher marks the end of an era. Siegfried & Roy had a vision for the kind of entertainment spectacular the world at large had never before seen. We are grateful for all they meant to MGM Resorts, Las Vegas and to the world of entertainment. pic.twitter.com/9Yx6TDVfyl

Fischbacher is said to have been released from the hospital at his own request and returned to his Las Vegas home where he was cared for by two nurses prior to his death. "I take my brother with me in every one of my prayers and I am deeply connected to him," Dolore previously told Bild. Fischbacher's death comes just months after his long-term collaborative partner Roy Horn died at the age of 75 due to complications following a COVID-19 infection. "Today, the world has lost one of the greats of magic, but I have lost my best friend," Fischbacher said in a statement to ABC News at the time.

"From the moment we met, I knew Roy and I, together, would change the world. There could be no Siegfried without Roy, and no Roy without Siegfried," he continued. "Roy was a fighter his whole life including during these final days. I give my heartfelt appreciation to the team of doctors, nurses, and staff at Mountain View Hospital [in Las Vegas] who worked heroically against this insidious virus that ultimately took Roy's life." Siegfried and Roy rose to fame through their use of white lions and tigers during live magic shows and ushered in a new era of entertainment in Las Vegas where they performed for four decades.

R.I.P. #SiegfriedFischbacher I was sad to hear of his passing. But now he's on his way to his friend Roy and they're 2gether again at last. Thank you for all the wonderful hours and kind words you've given me.😢❤❤ pic.twitter.com/t5XUF6gwM4

According to CNN, for Fischbacher, it all began with a child's curiosity towards a magic book he saw in a shop. "My eye caught something in the window; it was a book on magic," he said in his bio on their website. "I knew I had to have it. I can't explain, even now, why that was. All that stood in the way was five marks -- for me a fortune, a fortune for any little boy in Germany in 1947." Fischbacher—who was born in Rosenheim, Germany, on June 13, 1939—said that as he walked away, he found five marks on the sidewalk and immediately returned to purchase the book.

I co-owned a magic convention that allowed me to work closely with Siegfried and Roy over the years. When Siegfried heard my son was learning magic, he asked him to do a trick. Without hesitation, Hunter pulled out a deck of cards!
RIP Siegfried Fischbacher
SARMOTI #BrokenWand pic.twitter.com/UloLpgXGnq

Man, so many legends passing in one swoop. Siegfried & Roy were a major part of magic pop culture when my dad was still performing. Grew up with all their shows/TV specials, etc. No matter how parodied, they were true artists/innovators. #SiegfriedFischbacher https://t.co/TAvFw8iO0Z

Siegfried met Horn in 1957 aboard the TS Bremen cruise ship where he was working as a steward and entertainer. He enlisted Horn, the captain's bellboy, to assist during his nightly magic show during which a question from his new partner changed the course of their lives forever. "Siegfried, disappearing rabbits is ordinary, but can you make a cheetah disappear?" Horn said. After a pause to consider, Fischbacher replied, "In magic, anything is possible." Little did he know, unbeknown to him and the ship's captain, Horn had smuggled his pet cheetah aboard the cruise to join the act.

Siegfried Fischbacher, from "Siegfried and Roy" has died. The illusionist died of pancreatic cancer this week at the age of 81. @VladDuthiersCBS looks back at his life. pic.twitter.com/cLOHGEltht

What followed was a successful five-decade partnership. "We did what we did out of love, not for success or money," Fischbacher once said. "We had a deep respect for each other. We literally raised each other: I created Roy and Roy created Siegfried." The icon's funeral services will be private with plans for a public memorial for Fischbacher to be held in the future.
In lieu of flowers, donations can be made to the Cleveland Clinic Lou Ruvo Center for Brain Health.

“In magic, anything is possible”.