The teenager shared the image of him feeding Murray, the most dangerous crocodile in the Australian Zoo. 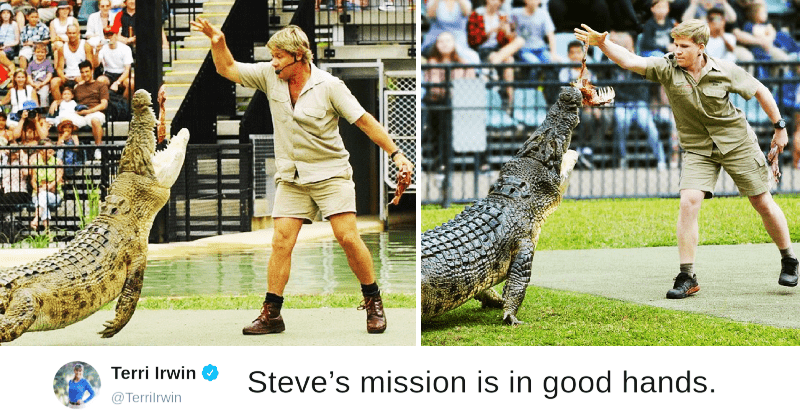 Robert Irwin had us all nostalgic and emotional as he recreated an iconic photograph of his father feeding a crocodile. Fifteen years after the photograph, Robert Irwin was wearing the same iconic khaki-colored shirt and shorts that his father was known for, as he fed the same crocodile, Murray, at the Australian Zoo. Robert posted the picture on Instagram with the caption: Dad and me feeding Murray... same place, same croc - two photos 15 years apart. He followed the post up with a heart emoji. His mother Terri commented on the post: Steve’s mission is in good hands.

The act did take a lot of courage from Steve Irwin’s 15-year-old son as Murray is considered the most dangerous crocodile in the Australian zoo. Robert Irwin can be seen standing dangerously close to the crocodile, just like his father. But if anything, the crocodile has only gotten bigger in 15 years, making the act even more daring. Robert Irwin is a spitting image of his dad.

“He's a reincarnate of his father!” a Reddit user commented on the picture. Both Robert Irwin and his daughter Bindi Irwin are following in the footsteps of their father Steve and nothing could have made him prouder as he himself revealed in an interview before his death in 2006.

When asked “If there was anything that would want to make him give away what he was doing now?” he responded saying, “When my children can take the football that I call wildlife conservation and run it up. When they're ready to run up our mission, I will gladly step aside." Steve Irwin is tearing up and choking with emotion as he continues, “And I guarantee you it will be the proudest moment of my life. My job will be done and then, and only then, will I know that I have achieved my ultimate goal - to be able to stand aside and let them run up my mission.”

Bindi Irwin was 8 and Robert Irwin 3 when their father passed away after a stingray struck him on the chest at Batt Reef in Queensland, back in September 2006.

The 15-year-old takes after his dad and is equally passionate about wildlife conservation. “We never know how long we are going to be on this earth for, you've got to make the most of every day. But I think for me, the wildlife work that I get to do, it's what I live for. It's what I love, it's my passion, it's what dad was passionate about, it's what my family is passionate about. It's something that I definitely want to continue for the rest of my life, it's what I've dedicated my life to,” said Robert Irwin, as per a report by the Daily Mail.

An avid photographer, Robert is eager to share his passion for wildlife with the world. “I want to share with people across the world the importance of conservation through our new television series and my photography. I want them to fall in love with wildlife and then maybe they will help save animals too.”

GOD he looks so much like his dad. They even have the same legs MY HEART CAN'T HANDLE THIS 😭😭😭 https://t.co/VRcp7WEywY

Both his children along with their mother, Terri Irwin, work at the Australian zoo caring for over 1200 animals. They even have their own Animal Planet show called, “Crikey, It’s the Irwins”. His daughter posted an emotional tribute to her Dad, calling him her superhero: I promise to do my best to make you proud and ensure your legacy lives on forever.

One Reddit user showered praise on their mother, “Terri Irwin she deserves so much credit for their wholesomeness. The entire family is wholesome and she raised their children with love and care and motivation in the spirit of their father.”

Love seeing his memory live on through you! pic.twitter.com/8SDFTiRlyK

When asked what was his biggest personal achievement in the 2006 interview, Steve Irwin said, "The proudest thing I have achieved personally is my children.”