Social media users left priceless comments after the incident. "Brother Dean was "asking for it", said one person. 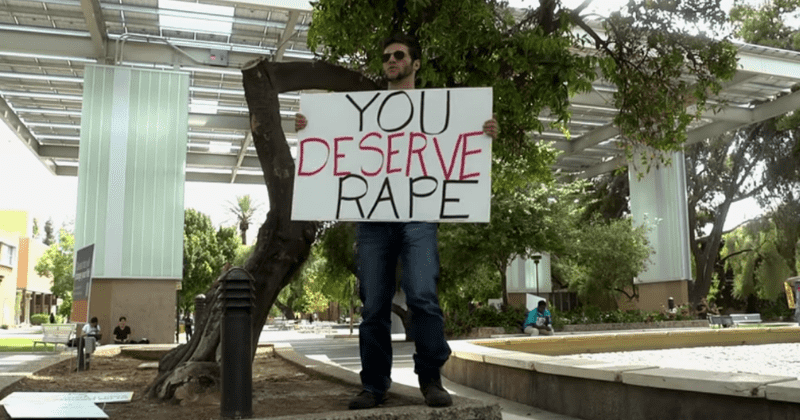 A street preacher named Dean Saxton had been provoking people outside an educational institution with a ridiculous poster he was displaying. It read "You Deserve Rape." Saxton who called himself Brother Dean and a Christian had been hollering at people with two other partners. They were angry about the way the women on campus dressed and used derogatory words such as fa**ots" and ridiculed homosexuals while talking about the "wrath of God." Even though Dean got clubbed with a baseball bat later by a female student, what was noteworthy was the various cheeky comments on social media that were left in the aftermath.

Now women can’t even have baseball bats anymore because one man gets hit on the head and makes a big deal out of it. How are women supposed to even talk to men if they get upset about getting hit with a bat?

It started with Twitter handle, Jennifer Gunter@DrJenGunter who posted an article on the incident and wrote: Why was he walking in such an unsafe area of town? And then the storm of tweets by people followed where the usual arguments of patriarchy were reversed. One comment by Twitter handle moi@thefakefatsunny read: I have sons, so I do feel sorry for him, but I taught my sons to be smart - DON’T go into risky situations alone and DON’T carry signs that send the wrong message and tempt women!!! Another commenter, Michael Gat@michaelgat wrote: And he puts himself in those situations so often. He must really, really want it.

What was he wearing?

And the hilarious comments just kept on coming. Kristyle Solomon@kristyle stated: Did he specifically tell her not to hit him with the bat? How are women to know how men think if they don't make themselves very clear? There was no short of creativity from people. Martha Brockenbrough wrote: He should have made the best of a head wound. Also he would not have bled If he didn’t enjoy it. There are mechanisms for shutting that down. Laura Takenaka@TakenakaLaura added to the thread: Did he even fight back? Must not have because if it was a ‘LEGITIMATE’ clubbing, he wouldn’t have bled..men’s bodies have a way of shutting that whole process down..

If he didn't want to be hit with a baseball bat, he shouldn't have been carrying that sign. He was just asking for it, honey.

Twitter handle Squid@SquidGertrude stated: As a woman, I don't even know how to behave in the workplace anymore. I mean... is it okay to compliment a man's smile? What he's wearing? Is it okay to hit him in the head if he's sending the right signals? It's impossible to keep up with the ever-changing rules. According to Pop Culture, a 19-year-old female student named Tabitha Brubaker was the assaulter and was charged with aggravated assault. She ended up staying in jail for 60 days in jail. Many times during Dean's stunt students from the university nearly got into a confrontation with him and his friends. After all, who would not be angered by such a brazen display. But as the video shows, the students tried to make light of the situation with some donning costumes and dancing in front of the three.

If he didn't want to be hit with a baseball bat, he shouldn't have been carrying that sign. He was just asking for it, honey.

Others brought in their own placards to try and diffuse the situation. In another incident involving Dean, he was arrested for assault after he kicked a woman in the chest while similarly vomiting his verbal bile, reports Phoenix New Times. He was booked into the Pima County Jail and charged with misdemeanor assault, and banned from the school's campus for one year according to Filbert Barrera, a local cop. Dean was heard saying "gay people are destroying the country." When the girl tried to talk to him she was met by his boot instead. "She took a pretty good kick. There were shoe marks on her chest," Barrera said.

Really need to know how many consensual sparring partners he’s had in order to evaluate this in proper context.