The 23-year-old Canberra student received a lot of support from the Internet after a picture of her hands made it to Instagram. 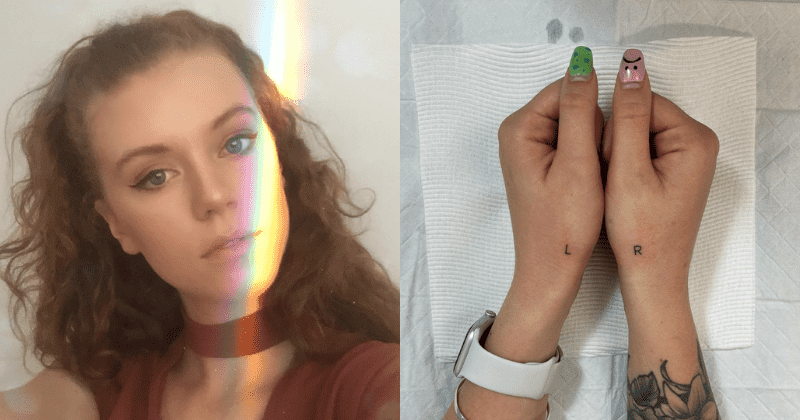 Directionally dyslexic people have a mortal fear of being asked for routes, so much so some may even wake up in cold sweats at the mere thought of it. D'Kodia Laine was one of them. Rather than struggle for the rest of eternity, however, the Australian decided to solve the problem with a permanent solution—she got the letters 'L' and 'R' tattooed on her left and right hands respectively. Ever since, she's been on the receiving end of amusing reactions from friends. Her boyfriend, meanwhile, is absolutely delighted. Speaking to Daily Mail, the communication student from Canberra, said: "He's grateful that now he won't get secondhand embarrassment!"

Laine always had difficulty navigating left and right and she was always ridiculed for not being able to do the simplest thing correctly. But, things reached a tipping point when she was nominated to be a navigator for her team during a scavenger hunt at a party last year. Crumbling under immense pressure, she took the driver on "a few wrong turns" only for a friend to rescue her by drawing the letters 'L' and 'R' on her hands. At first, the simple hack worked wonders and by the end of the adventure, she joked about getting a permanent one, only it wasn't a joke at all. The 23-year-old then got in touch with Lauren Winzer, a famous artist from Hunter & Fox in Alexandria, Sydney, to solve her issue forever.

Student, 23, who has always struggled to tell left from right gets letters TATTOOED on her hands as a reminder - inspiring others to do the same
via https://t.co/pevZ0scAkQ How sad. https://t.co/AN9qZ6k1ui

"My friends would joke about how silly it looks having an adult make the L shape with your hands to differentiate," she said, sharing about her friend's reaction to her utter lack of directional sense." However, she's relieved her tattoo will save her from tons of embarrassment and anxiety in the future. "It started as a joke but it's actually super useful and I don't look dumb making an L with my fingers to figure it out," she told the outlet. The tattoo artist, Winzer also shared photos of the tattoos on her Instagram account. "Not only are tattoos cute, but they can also be super functional!!! Good luck with all ur future directions happy to help guide you," she captioned the post. Less than two days later, the photos have racked up over  4,200 likes and plenty of supportive responses.

"I love this! I definitely need to do this myself," a seemingly directionally challenged person responded to the picture. "See I’m not the only person who needs this," wrote another tagging a couple of her friends. "Me when I learn to drive," joked one more. Teejaydubb noted: "Our hands have built-in reminders for the left anyways", but one user noted they both look like an L "in a stressful situation", hitting the nail on a real issue directionally weak people face. Others agreed that having the tattoo is a great way to minimize confusion as some others appreciated Laine's interesting fix. "Based on the comments on the photo on Lauren's page it seems to be a tattoo a lot of people are saying they need so I don't feel too dumb now," Laine said satisfied by her great decision.

According to Dyslexia Reading Well, being directionally challenged is a legitimate issue one that can be solved with a few strategic tips, including wearing a watch on the left hand always, visualizing something you always do with the right hand such as writing, and always being aware of the fact that the thumb and the index finger on the left hand always forms an L.